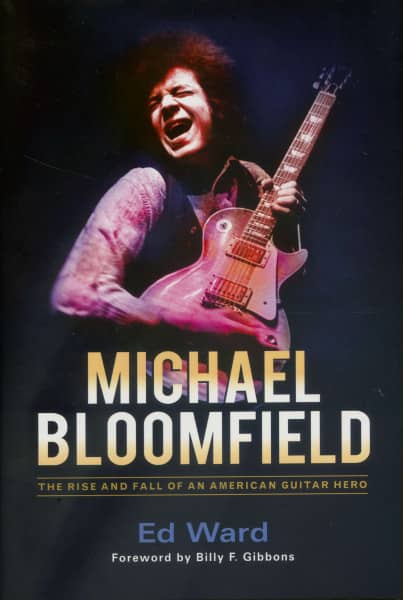 Michael Bloomfield: The Rise and Fall of an American Guitar Hero

Hardcover, 224 pages, English, Chicago Review Press
This is the definitive biography of the legendary guitarist whom eminent figures like Muddy Waters and B. B. King held in high esteem, and who created the prototype for Clapton, Hendrix, Page, and everyone who followed. Bloomfield was one of the first popular music superstars of the 1960s to earn his reputation almost entirely on his instrumental prowess. He was a member of the Paul Butterfield Blues Band, which inspired a generation of white blues players; he played with Bob Dylan in the mid-1960s, when his guitar was a central component of Dylan's new rock sound on "Like a Rolling Stone" and at his earthshaking 1965 Newport Folk Festival performance.
He then founded the Electric Flag, recorded Super Session with Al Kooper, backed Janis Joplin, and released at least twenty other albums, despite debilitating sub-stance abuse. He died of a mysterious drug overdose in 1981. A very limited edition of a book of this title was first published in 1983, but it has here been so thoroughly revised and expanded that it is essentially a brand-new publication.
Based on exten-sive interviews with Bloomfield himself and with those who knew him best, and including an extensive discography and Bloomfield's memorable 1968 Rolling Stone interview, Michael Bloomfield is an intimate portrait of one of the pioneers of rock guitar.
'A brilliant biography of the ethereal Chicago blues guitar giant who shook the walls down in the '60s and '70s with his soaring art. There is a mother lode of fresh rock 'n' roll history in these pages. The discography alone is worth the price of admission. Highly recommended!' —Douglas Brinkley, author of Rightful Heritage and The Wilderness Warrior
'In this chronicle of a life found and lost, Ed Ward writes with deep empathy, and also with a hard-boiled patience that burns off all sentiment. It is the perfect tone for a story Ward never tries to make bigger than it is, so that finally it makes terrible and final sense.' —Greil Marcus, author of The History of Rock 'n' Roll in Ten Songs and Mystery Train

'Michael Bloomfield was brilliant, troubled, flawed, charming, and dauntingly influential, and Ed Ward adeptly balances his strengths and weaknesses, creating a picture of a man who was all too in tune with a complicated time.' —Elijah Wald, author of Dylan Goes Electric! and Escaping the Delta
'With all due respect to Eric Clapton, B. B. King, Albert King, Buddy Guy, Johnny Winter, and so many others who are in the pantheon of blues greats, in this white Jew's opinion, Michael Bloomfield was simply the best blues guitarist I've ever heard.' —Rob Reiner, filmmaker and actor
'Mike Bloomfield was such a unique and mercurial character it was like handling hot coals in your mind. You should get to know him because the people that knew him, loved him. His guitar playing was beautiful. His heart and soul were as big as it gets. This remembrance brings to life the amazing story of a young Jewish kid from Chicago's North Side whose unique style of improvisational guitar led the world into the modern age of blues and rock. Hey, folks, he was historic.' —Nick Gravenites, singer and songwriter
Foreword by Billy F. Gibbons
Talk about impact . . . ! Talk about influence and inspiration! We're I talking Bloomfield: Mike Bloomfield, guitarist and stylist extraor-dinaire. From distant observer to distinguished performer, Mike B. and his guitar ran the gamut, traversing all there was and would be within his vision, where guitar inventiveness became trademarked in his all-too-brief career. Yes, we're talking the one-and-the-same Bloomfield whose blues bloomed and boomed under the dexterous developments that dealt his hand and landed him in the game where he knew he wanted to be. Sounding familiar . . . ? Perhaps so with the Bloomfield we came to know seemingly appearing from out of nowhere fast. Yet the overnight sensation was a long time in the making.

Starting with that pawnshop six-string, the unraveling of the alluring mystique of sounds abound-ing all around in his very hometown began to make sense once the pieces to that powerful puzzle, them blues, began to gather. And it was this allure that became the stepping-stone to take his curiosity to the street. Although a stranger now frequenting those strange outposts of that strident sound, he was not alone. Several like-minded individuals were similarly drawn to the task of attempting to emulate the basics of that thing they were after.

So, banding together as newfound souls with a friendly sort of mutual bond was the obvious way in to getting way out, way outside any notion whatsoever of creating something predictable. Rather, some very unpredictable expressions began to emerge between Bloomfield and the aggregation with the likes of Paul Butterfield, Charlie Musselwhite, Nick Gravenites, Norman Dayron, guitarist Elvin Bishop, Barry Goldberg, and the fashionable Mark Naftalin. These were the guys surging toward forming this nucleus actually expressing something not only believ-able—they began laying down sound that was solid . . . sounds that were standing up to a stiff legion of loyalists not necessarily impressed with anything less than what the head honchos of the day were laying down with the late-night crowd.

Muddy Waters had it, Jimmy Reed had it, Howlin' Wolf more than had it . . . hell, it seemed like every-body on the South Side of Chi-Town either had it or was bound and determined to get it, and here Bloomfield was smack-dab in the midst of gettin' it. And gettin' down pretty hard. Keep in mind this was mid-'60s stuff. A time when people were waiting to get what they were wanting, waiting to feel what they all wanted to feel, and all of a sudden, all of it managed to find its way to wax. Bloomfield, wringing out his tasty additions for Butterfield and band, hit the mark.

Mike's presence heard on those superb entries into the field are what we came to know and admire and ultimately have come to miss. This is where we might best leave it for now. There's certainly a somewhat vague awareness of what came after right up to the end, yet Mike's legacy of tantalizing and tasteful tags on "them blues" luckily lingers on. Yes, we're talkin' Bloomfield.

Article properties: Michael Bloomfield: The Rise and Fall of an American Guitar Hero