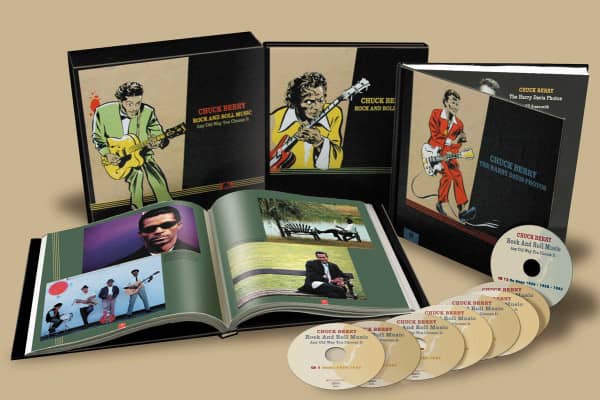 "If you tried to give rock and roll another name, you might call it 'Chuck Berry.'" (John Lennon)

Since our launch in 1975, we at Bear Family have wanted to honor Chuck Berry. There have been endless Chuck Berry compilations—more than anyone could possibly tabulate, but we wanted to do the ultimate Chuck Berry compilation, containing:
But there’s more!
Expatriate British photographer Bill Greensmith lives in St. Louis and a few years back he found the photo archive of Chuck Berry’s uncle, Harry Davis. Included are many previously unseen images of Chuck performing in St. Louis and hanging out with friends and family. In these images, Chuck is unguarded and relaxed. We also see him performing at blues nightspots in and around St. Louis before he was famous. These photos, included with this set in a high quality 104-page hardbound book, will open your eyes to Chuck Berry as you’ve never seen him.

Plus, there’s a second 252-page hardbound book with a definitive essay from Chuck’s biographer, Bruce Pegg, additional texts by Mike Snow and Roger Fairhurst, a comprehensive discography by Fred Rothwell, hundreds of published and unpublished photos, including several images made by respected French photographer Jean-Marie Perrier in 1964.

In other words, everything you want by Chuck Berry in one place!
The last word on the first name in Rock ‘n’ Roll.

It's simply some of the most glorious pop music ever produced. ,
Uncut 1/15 Luke Torn

This is a superb, not to mention long overdue, tribute to one of rock 'n' roll's premier originators. His back catalogue has been reissued and reissued over and over again, but this has to be the most adventurous configuration of it to date. Plus, of course, the two books will knock your beret into the creek. , ,
Now Dig This 12/14 Trevor Caijao ,