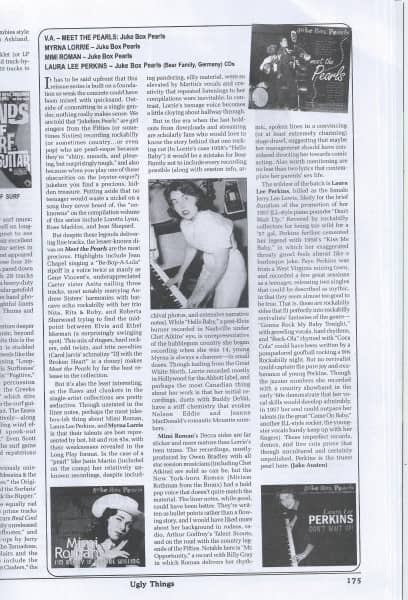 It has to be said upfront that this 'reissue series is built on a foundation so weak the concrete could have been mixed with quicksand. Out-side of committing to a single gender, nothing really makes sense. We are told that 'Jukebox Pearls' are girl singers from the Fifties (or some-times Sixties) recording rockabilly (or sometimes country...or even pop) who are pearlesque because they're 'shiny, smooth, and pleas-ing, but surprisingly tough,' and also because when you play one of these obscurities on the (oyster-esque?) jukebox you find a precious, hidden treasure. Putting aside that no teenager would waste a nickel on a song they never heard of, the 'un-knowns' on the compilation volume of this series include Loretta Lynn, Rose Maddox, and Jean Shepard.

But despite these legends delivering fine tracks, the lesser-known divas on Meet the Pearls are the most precious. Highlights include Jean Chapel singing a 'Be-Bop-A-Lula' ripoff in a voice twice as manly as Gene Vincent's, underappreciated Carter sister Anita nailing three tracks, most notably marrying Andrew Sisters' harmonies with bat-cave echo rockabilly with her trio Nita, Rita & Ruby, and Roberta Sherwood trying to find the mid-point between Elvis and Ethel Merman (a surprisingly swinging spot). This mix of ringers, hard rockers, odd twists, and trite novelties (Carol Jarvis' schmaltzy 'DJ with the Broken Heart' is a doozy) makes Meet the Pearls by far the best release in the collection.

But it's also the least interesting, as the flaws and clunkers in the single-artist collections are pretty seductive. Though unstated in the liner notes, perhaps the most juke-boxish thing about Mimi Roman, Laura Lee Perkins, and Myrna Lorrie is that their talents are best repre-sented by hot, hit and run 45s, with their weaknesses revealed in the Long Play format. In the case of a 'pearl' like Janis Martin (included on the comp) her relatively un-known recordings, despite includ-
ing pandering, silly material, were so elevated by Martin's vocals and creativity that repeated listenings to her compilations were inevitable. In contrast, Lorrie's teenage voice becomes a little cloying about halfway through.

But in the era when the last hold-outs from downloads and streaming are scholarly fans who would love to know the story behind that one rocking cut (In Lorrie's case 1958's 'Hello Baby') it would be a mistake for Bear Family not to include every recording possible (along with session info, archival photos, and extensive narrative notes). While 'Hello Baby,' a post-Elvis burner recorded in Nashville under Chet Atkins' eye, is unrepresentative of the bubblegum country she began recording when she was 14, young Myrna is always a charmer—in small doses. Though hailing from the Great White North, Lorrie recorded mostly in Hollywood for the Abbott label, and perhaps the most Canadian thing about her work is that her initial recordings, duets with Buddy DeVal, have a stiff chemistry that evokes Nelson Eddie and Jeanne MacDonald's romantic Mountie numbers.

Mimi Roman's Decca sides are far slicker and more mature than Lorrie's teen tunes. The recordings, mostly produced by Owen Bradley with all star session musicians (including Chet Atkins) are solid as can be, but the New York-born Roman (Miriam Rothman from the Bronx) had a bold pop voice that doesn't quite match the material. The liner notes, while good, could have been better. They're writ-ten as bullet points rather than a flow-ing story, and I would have liked more about her background in rodeos, radio, Arthur Godfrey's Talent Scouts, and on the road with the country legends of the Fifties. Notable here is 'Mr. Opportunity,' a record with Billy Gray in which Roman delivers her rhythmic, spoken lines in a convincing (or at least extremely charming) stage drawl, suggesting that maybe her management should have considered directing her towards comic acting. Also worth mentioning are no less than two lyrics that contemplate her parents' sex life.

The wildest of the batch is Laura Lee Perkins, billed as the female Jerry Lee Lewis, likely for the brief duration of the promotion of her 1957 XL-style piano pounder 'Don't Wait Up.' Revered by rockabilly collectors for being too wild for a '57 gal, Perkins further cemented her legend with 1958's 'Kiss Me Baby,' in which her exaggerated throaty growl feels almost like a burlesque joke. Faye Perkins was from a West Virginia mining town, and recorded a few great sessions as a teenager, releasing two singles that could be described as mythic, in that they seem almost too good to be true. That is, these are rockabilly sides that fit perfectly into rockabilly revivalists' fantasies of the genre—'Gonna Rock My Baby Tonight,' with growling vocals, hard rhythms, and 'Rock-Ola' rhymed with 'Coca Cola' could have been written by a pompadored goofball rocking a 90s Rockabilly night.

But no revivalist could capture the pure joy and exuberance of young Perkins. Though the jazzier numbers she recorded with a country showband in the early '60s demonstrate that her vo-cal skills would develop admirably, in 1957 her soul could outpace her talents (in the great 'Come On Baby,' another XL-style rocker, the young-ster vocals barely keep up with her fingers). These imperfect records, demos, and live cuts prove that though uncultured and certainly unpolished, Perkins is the truest pearl here. (Jake Austen) )