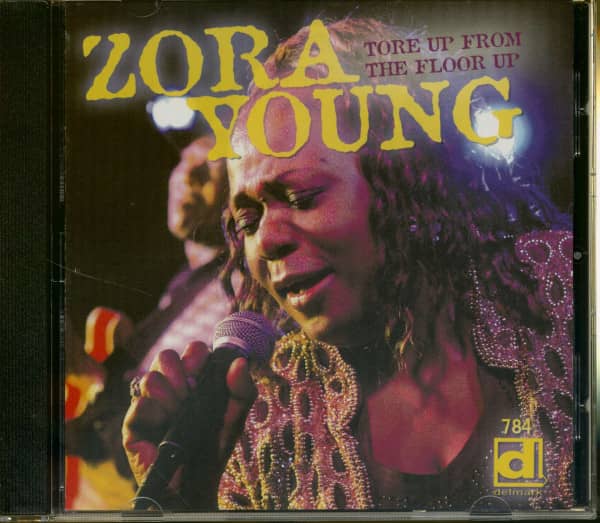 Zora Young: Tore Up From The Floor Up

Of her first Delmark CD Learned My Lesson (Delmark 748) Living Blues magazine said 'Her rough-edged croon can raise welts or love bumps. She has the versatility to strut comfortably from back-alley funk to uptown jump sophistication.' Tore Up From The Floor Up features five original compositions, some choice covers and an interview. Guitarist Pete Allen provides most of the musical direction while The Chicago Horns provide support on 'Til The Fat Lady Sings' and 'Ace Of Spades.'

Article properties: Zora Young: Tore Up From The Floor Up

Learn more about Zora Young
WHEN ZORA YOUNG PERFORMS, the sound of her THE FLOOR Ur voice tells almost as many stories... more
Close menu
"Zora Young"

WHEN ZORA YOUNG PERFORMS, the sound of her THE FLOOR Ur voice tells almost as many stories as the words she sings. Her raspy, corrugated timbre bespeaks both ir. power and vulnerability, a dispatch from the front 11 lines of life. She's capable of modulating over the course of a single measure from a smoldering mid-range croon into a full-bodied gospel shout--then, on ballads, she'll soften into a kittenish purr. Shot through with both muscularity and grace, hers is the voice of a woman who's earned the right to proclaim her joys and her sorrows with equal conviction. In the words of folk singer Rosalie Sorrels, Zora's music sounds "learned by living, sung by heart."But there's a reserve to Zora, too. Her enunciation and phrasing are disarmingly casual — even at her most flamboyant she sounds as if there's something she hasn't revealed, something we'll have to stay around for a while to discover.

Her personal presence conveys a similar message: although she prides herself on her professionalism and stagecraft, her demeanor is reserved, even demure. After a soul-wrenching display of vocal pyrotechnics and emotional heat she'll step to the edge of the stage, survey her audience with a regal yet affectionate gaze, and blow a delicate kiss of gratitude. Neither ingratiating nor arrogant, she comes across as a woman in command, a woman for whom dignity and self-respect are as important as emotional honesty and artistic achievement. Zora was born in West Point, Mississippi, not far from where fabled bluesman Nowlin' Wolf came into the world. According to family lore. Wolf was a relative — she remembers him coming through town to perform one time when she was a little girl. and he came by the house for dinner and treated the family to a ride in his luxurious car. But her own musical universe was strictly circumscribed — at least when the old folks were around. Zora's mother, Lillie, was a staunch churchgoing Christian for whom anything other than religious music was "the blues." and thus forbidden.

The family moved to Chicago when Zora was still a child, but her mother remained resolutely conservative: she even forbade Zora to take music lessons in school, lest the girl become tempted to pick up an instrument and start playing "that worldly music" instead of hymns, spirituals, or gospel songs. "She's still praying for me," Zora affirms with a warm chuckle. But when Mama was out of earshot, Zora savored the secular sounds that were everywhere in Chicago: on the radio, on television, even out in the street. Becoming a singer became her dream, even before she had any idea of what it really meant to forge a professional career. Unschooled in the arbitrary genre distinctions beloved of critics and purists, she simply embraced anything that sounded good to her. "I was into soul, R&B." she remembers. "I saw the Grand Ole Opry here in Chicago. I didn't know it was 'country and western,' I didn't know about the difference. All I knew, it was some good music — a good storyline. I'd been leaving choir rehearsals down there at 51st Street and walk past and hear the blues in Theresa's (a legendary blues club at the corner of 48th Street and Indiana Ave.), Junior Wells and them kinda people. Living in Chicago, eventually, everybody comes back to the blues." In the early '70s Zora hit the road with a feisty soul/R&B aggregation called the Misfits. a band that featured her current guitarist. Pete Allen. The Misfits eventually gave way to a band Zora inherited from soul/blues star Bobby Rush, which became known as Cleaning Company Number Three.

But although they opened shows for major acts along the chitlin' circuit for several years, they struggled to make a living ("we had two trunks of clothes and didn't make enough money to clean one outfit!"). Zora, aware of the opportunities becoming available for blues artists in Europe and elsewhere, decided to embrace a rootsier sound. It wasn't a decision she took lightly. "I went back and I studied my blues." she attests. "I studied it from the rooter to the tooter! You can't play and sing this music until you get serious and respect these old people that made it, and try to get around and meet 'em while they're still living, and figure out what made 'em tick." She was also determined to present the blues, as well as herself, in a manner that conveyed dignity and respect; a key to that artful meld of intimacy, sassiness. and ladylike reserve that still characterizes both her performances and her offstage demeanor. Although she may have strayed from the musical conservatism her mother tried to instill in her, Zora was "raised right," as they say down home, and she was not about to compromise her own core principles. Zora first recorded in the early '80s. Since then she's developed an international reputation as a live entertainer, and her recorded output, although sparser than she'd like, has been critically well-received (especially her 2002 Learned My Lesson, Delmark 748).

But she remains determined to go farther. "I'm optimistic about living," she maintains, "and going straight ahead. I'm always optimistic about my future — if I wasn't I wouldn't keep going. After thirty-four years, I just do Zora. And whatever it comes up as, that's what it is. I have no time for copying anybody — as they say, 'I gotta be me!' Blues is just reality. If you live, you automatically get it on your plate. I use this saying onstage: 'if you never had the blues, just live on.' It's gonna knock on your door." That does not mean, though, that Zora considers the blues to be a music of sadness or complaint.

As she demonstrate on this disk--from the streetsy grit of the title tune through the prophetic power of her message in "Til The Fat Lady Sings;" from the sly double-entendre of "Handy Man" through the soulful punch of "Ace Of Spades," an O.V. Wright classic graced with the fatback fret-board stylings of Chicago's Walter Scott, to the healing tears that flow through her take on the classic ballad "Since I Fell For You"...the blues according to Zora Young is a music of strength, redemption, and celebration of life. "It lifts me up," she declares. "I went through a lot of illness here one time, and I just sang my way through it. I'd walk around through the hospital singing — I'd be in my own world. Writing and singing songs is therapy for me. I'll hold a pity party for a few minutes, but it never lasts too long." -David Whiteis 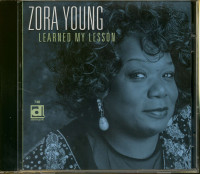 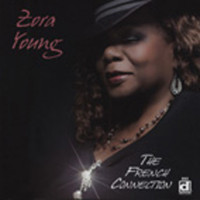