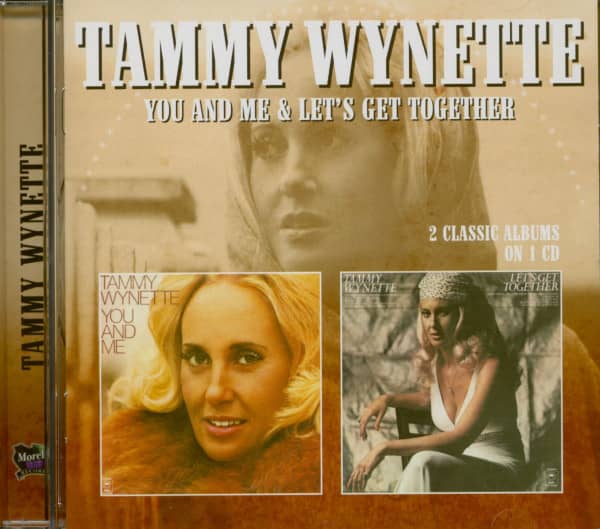 Tammy Wynette: You And Me - Let's Get Together (CD)

Tammy Wynette, known as the “First Lady of Country Music”, was one of the music’s truly iconic figures. This much beloved entertainer who, during a twenty-seven year recording career saw the release of 42 studio albums and charted 73 singles.

You And Me, with its title track scoring a two week run at the top of the Billboard Country charts in October 1976, headed up an album featuring a diverse range of material. Willie Nelson’s Little Things is a catch-up ‘phone conversation between a separated couple, Jesus Send A Song equates religion with the Nashville music scene surroundings, and southern emotions live on with Dixieland (You Will Never Die).

There is also a cover of Donna Fargo’s hit Funny Face and, perhaps a little away from Tammy’s norm (at least, at that time), the Hawaiian Wedding Song. The album secured a Top 4 placing. Let’s Get Together from 1977 was well- acclaimed, not least of all because several songs came close to her recordings of a few years earlier, her inimitable sob-in-the-voice letting the listener know about holding your man, losing your man and what to do afterwards.

Among the songwriters who contributed to the collection are the Statler Brothers Don and Harold Reid (‘You Could Be Coming To Me’) and Rafe Van Hoy (‘Cheatin’ Is’) while Tammy shared credit with George Richey on ‘Loving You, I Do’. Both albums appear on CD for the first time.

Article properties: Tammy Wynette: You And Me - Let's Get Together (CD)

“I hated myself for not writing that song. It fit my life completely,” said Tammy Wynette. It was the first significant hit for Bobby Braddock, who scored hits in five decades after coming to Nashville in 1964. Originally from Florida, he first came to Nashville in 1959 playing piano for a forgotten Decca act, Chuck & Betty. He returned in 1964 with Marty Robbins, and signed with Tree Music in 1966. He says he began D-I-V-O-R-C-E as I L-O-V-E Y-O-U. “I wrote it and nobody bit,” he said. Curly Putman was Tree's songplugger at the time, and Braddock asked him what was wrong. “The melody around the title is too happy for such a sad song. It sounds like a detergent commercial,” Putman told him, and helped him rewrite it. Putman had written Tammy's first #1, My Elusive Dreams, and had Billy Sherrill's ear at Epic Records. Sherrill pounced on the rewritten version, borrowing the keyboard lick from Braddock's demo. The song lent itself to caricature or irony, but in Tammy Wynette's hands, there's none of either. It's painfully, awfully real. She was the singer of songs for people who have reached the end of the road. Released at the beginning of May, it shot to the top of the country charts on June 29, and even climbed up the Hot 100 as far as #62. If Tammy didn't parody the song, others couldn't resist. When Tammy's record became a belated #12 hit in England in 1975, Billy Connolly took his parody to #1. Connolly has a dog in place of the kid, and the owners spell out words like “vet” and “quarantine.”

Review 1
Read, write and discuss reviews... more
Close menu
Customer evaluation for "You And Me - Let's Get Together (CD)"
From: Keith McRobert On: 6 Jun 2020

Close to her best albums ever from one of the greatest female country singers. 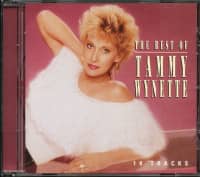 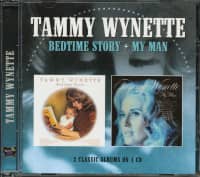 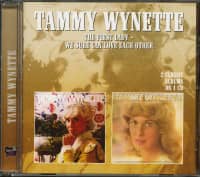 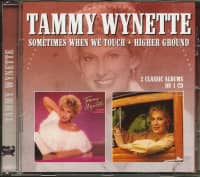