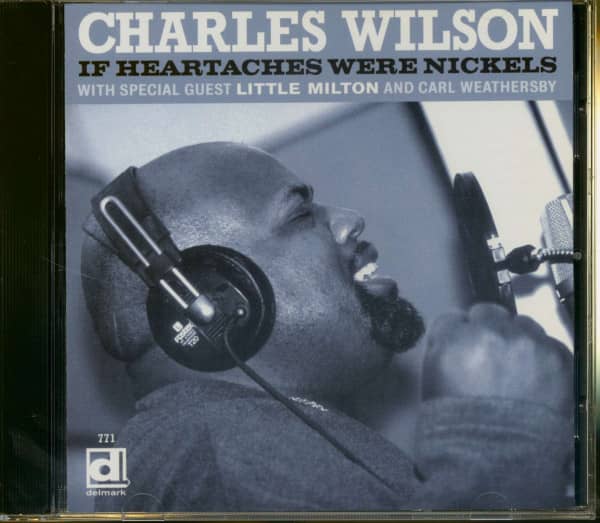 P Secure bonuspoints now
Description
Learn more about Charles Wilson
Review 0
Description
Originally from Chicago, he moved to Mississippi in 1999 to be closer to his fan base. Although... more
Close menu

Charles Wilson: If Heartaches Were Nickels

Originally from Chicago, he moved to Mississippi in 1999 to be closer to his fan base. Although black radio stations in the south prefer to play soul/blues with synthesizers, sequencers and drum machines, Wilson wanted to record a 'real' album, handmade music. So he went back to Chicago to record at Delmark's Riverside studios. This is a fine mix blues and soul sometimes funky, sometimes mourning and soulful. The music reminds me of Albert King's. Excellent. A special mention should go out to Carl Weathersby, who obviously feels at home with this kind of blues. CHARLES WILSON - voc, CARL WEATHERSBY - gtr, JAMES PICKETT - pno/org, NICK CHARLES - bass, BRIAN JONES - drums, plus horns (3 tracks). Special guest: LITTLE MILTON - gtr (2 tracks).

Entertaining audiences since he was a child, Charles Wilson has developed a large and faithful fan base. By the age of nine he was on stage, and at fourteen hit the road. Success came with the 1990 lchiban release Blues In The Key Of C and the subsequent string of releases on Traction and Ecko Records. Orig-inally from Chicago, Charles has relocated to Greenville, Mississippi keeping him close to his biggest concenration of fans. On 'Hattie Mae's' and 'Lonely Man', blues great Little Milton (Charles' uncle) lends his distinctive guitar playing. If Heartaches Were Nickels captures the most raw and emotional perfor-mances of Charles Wilson on record. Complete notes enclosed by Keith Federman.

Longtime fans of Charles Wilson already know what his new listeners are just finding out. That Charles Wilson is one of the blues world's exceptional gifts. Charles easily moves between blues and soul with absolute conviction and is no stranger to the stage or recording industry. His earlier releases on Ecko and Ichiban Records garnered considerable air-play and critical praise. On the road and entertaining audiences since he was a child, Charles has devel-oped a large and faithful fan base throughout the deep south, playing the Chitlin Circuit rooms and festivals in the African American community. His career, like his music, followed the Miss-issippi from Chicago to the Delta. Charles was born in January, 1957.

Growing up in the infamous pro-jects of Chicago's west side, his mother and father encouraged his love of blues and gospel. Like many of the greatest soul singers, Charles' first audiences were in his mother's church. His early gospel training is still evident. However, some of Charles' fondest memories are of Chicago's legendary Regal Theater. His father would bring him backstage to watch his Uncle Little Milton—he was mesmerized. On these trips Charles was also exposed to Bobby "Blue" Bland, Jackie Wilson, Sam Cooke, and Junior Wells. The Regal Theater became Charles' classroom and the singers his teachers. By the age of nine he was on stage himself, and at four-teen, he hit the road. Opening shows for artists like Bobby Rush honed his skills as a performer and taught him how to survive life on the road. After graduating high school Charles increased his performance schedule and in early 1978 released his first single "I Need A Love I Can See In The Day-light" on Sky Hero Records.

Charles continued to play clubs opening for legends Z.Z. Hill, Koko Taylor, Buddy Guy, and B.B. King. His presence so impressed Alley Cat Records that they signed him to a two record deal. These releases cemented his position as a touring act, but real success came with the 1990 Ichiban release Blues In The Key Of C and the subsequent string of releases on Traction and Ecko Records. His records found their way to radio stations and music stores throughout the African American communities of the south. So did Charles, in 1999 leaving Chicago and moving to Green-ville, Mississippi. The move took him closer to the bulk of his work in the heart of the Chitin Circuit. Unexpectedly, it also took him closer to the roots of the music. Charles spent a lot of time listening to classic soul and blues. In contrast, the music getting airplay on the Black radio stations of the south, was getting increasing-ly more driven by synthesizers, sequencers, and drum machines. He was starting to become frustrated with the production values.

He wanted to record something with a band, and a "live feel", something that allowed him to reach back into the blues and soul sounds that made him want to sing as a child. In July of 2003 a conversation with Delmark Records' Bob Koester changed Charles' frustration into an opportunity. If Heartaches Were Nickels captures the most raw and emotional performances of Charles Wilson to date. "Cut You A-Loose" and "Ain't No Hoochie Coochie Man" growl with intensity. "I Talk to Myself", a haunting slow blues, is deep and heartfelt. One of Charles' per-sonal favorites is the funky Albert King clas-sic "Cadillac Assembly Line".

He and Carl Weathersby get to pay homage to a great bluesman and friend. A little nepotism is a wonderful thing when your uncle is blues great Little Milton. He joins Charles, on "Hattie Mae's" and "Lonely Man", lending his distinctive guitar playing. On the title cut "If Heartaches Were Nickels" Weathersby's gui-tar work punctuates Charles' dynamic and unbelievably soulful performance, conjuring up intense, almost piercing emotions. If Heartaches Were Nickels will assuredly add to the growing list of Charles Wilson fans. —Keith A. Federman, February, 2004 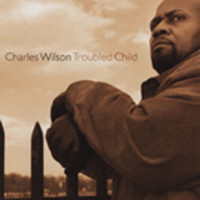