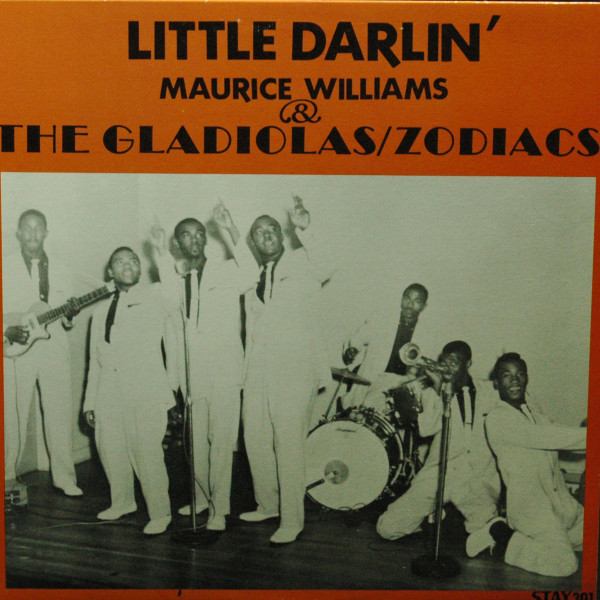 P Secure bonuspoints now
Description
Learn more about Maurice Williams
Review 0
Description
There may be a rose in Spanish Harlem, but Gladiolas at their best come from Lancaster,... more
Close menu

There may be a rose in Spanish Harlem, but Gladiolas at their best come from Lancaster, South Carolina.

While attending Barr St. High School in Lancaster, Maurice Williams met Earl Gainey (tenor), -when they both sang in a gospel group called The Junior Harmonizers. After awhile they left to form their own group, The Royal Charms (a combination of their two favorite groups’ names — The Charms and The Five Royales). The other members were William Massey(tenor and baritone), Willie Jones (baritone) and Norman Wade(bass).

The Royal Charms got a job doing a Saturday morning show on WLCM Radio in Lancaster, where they sang whatever were the biggest R&&, B hits of that particular week After doing this for about a year, they decided to go on to bigger and better things. Their big chance came when Maurice contacted Ernie’s Record Shop in Nashville(owner of Excello Records). Young told them to stop in for an audition when they were playing in the area.

Well, Maurice said that they’d stop by soon (neglecting to mention that they had no gigs anywhere in Tennessee). The Royal Charms now began to get things ready for the big trip. To raise money, they visited local businessmen explaining their needs.

When all contributions were in, they left for Nashville with $40.00 among them, riding in Willie Jones’ old Chrysler with four slick tires. Luckily, they made ‘ll to Nashville without any trouble and went to see Ernie. After hearing LITTLE DARLIN’ and SWEETHEART PLEASE DON’T GO, Ernie announced that he liked SWEETHEART and could possibly use LITTLE DARLIN’ for the flip. The Royal Charms then faded into history as Ernie re-named them The Gladiolas (Although The Gladiolas’ LITTLE DARLIN’ was the original, The Diamonds’ cover version hit the Billboard Top 100 twenty-one days earlier.)

While with Excello, they recorded TREES and several other unreleased cuts. The Gladiolas also moved towards being a self - contained group by utilizing their instrumental talent: Earl Gainey aside from being a tenor, also played guitar and drums, William Massey played trumpet, Maurice played piano, and drummer Mac Badskins was added. Bob Robertson, a tenor, was also added and was on the last two Excello records. When The Gladiolas left Excello, Ernie told them that they could no longer use the name for recording (however, they still could use it for appearances).

While on a tour through West Virginia, Maurice’s Mercury quit and had to be taken to a shop for repairs. While waiting, The Gladiolas’ manager, Harry Goins, was thumbing through a magazine. He stopped at an advertisement for a foreign car called a Zodiac and said “That’s it! That’s our new name.” Around this time, tenor Henry Gaston replaced Earl Gainey and Badskins and Robertson left.

The Zodiacs’ first recordings were done for Cole, a small South Carolina label. Due to lack of promotion, neither record sold well. One more small label, Selwyn, and the group began to fall apart: Bill Massey went into the Air Force, Norman Wade moved to- New Jersey, and the group’s three- year career was over. Maurice immediately picked up the pieces and formed a new Zodiacs group. They consisted of tenor Henry Gaston, tenor Wiley Bennett, baritone Charles Thomas, bass player Albert Hill and a drummer named Little Willie Morrow. They recorded two records for Soma around 1960, including a follow-up to LITTLE DARLIN’. It was at this point that they approached Al Silver of Herald with STAY. Silver liked the song, but said it was too smooth and polished - it needed a stronger beat with a choppy lyric that would be catchy to the ear. He suggested that Maurice sing in a nonchalant, flat voice to project this idea (The falsetto part was done by Henry Gaston.) The Zodiacs didn’t like the way their song had been changed, but they gave in and soon had a number one spot on the Top 100.

After STAY they had two minor successes with l REMEMBER and COME ALONG (done in the style as STAY). ' In the mid-1960’s The Zodiacs went from one label to another(Atlantic, Scepter, Sphere Sound, 440/ Plus, Vee Jay, Sea- Horn/Deesu, and Veep) without another big hit. During this period, Johnny Mobley(tenor and baritone) would replace Wiley Bennett from time to time.

ln 1966 they linked up with Marshall Seahorn who recorded MAY l and gave it to Vee Jay, When Vee Jay folded, Seahorn released it on his own Deesu label and it was a local hit for The Zodiacs. Seahorn knew Bobby Robinson who had Gladys Knight and The Pips under contract. Since they were doing studio work, Seahorn got them to back up Maurice on several sides. The theory behind this was that with Maurice as a single and also with The Zodiacs, the chances for a hit were in- creased. Alas, except for some local successes, it didn’t work The Zodiacs are still going strong in the Carolinas today, doing mostly club and college dates.

Maurice Williams and the Zodiacs

Herald/Ember Records had been around since 1953, and they’d been hot and cold. By late 1960, they were stone cold when, as label boss Al Silver told Arnold Shaw, “A kid comes into my office with a Southern accent. White kid who says he’s a songwriter, and would I listen to his material. I tell my secretary to have Bill Darnell, who worked for me then, audition his material. After a while, Bill comes out and asks me to listen to one song. It was ‘Stay’ by Maurice Williams.” The white guy was probably Phil Gernhard who’d recorded Maurice for Cole Records in 1959. Gernhardt had taken on some new partners, Jim and John McCullough, and they recorded a demo of Stay in an abandoned TV studio. Williams also insists that he wrote the song in 1953, which is not out of the question.

Atlantic and other labels turned down the song before it reached Silver’s door. “The song wasn’t recorded at a high enough level,” Gernhard told Fred Bronson. “None of us knew what the hell we were doing. Silver drew a VU meter for us, and said, ‘Go back and re-record it, and keep the needle up in this area.’ We took the piece of paper with us. Also, it had a line in it that they found objectionable. ‘Let’s have another smoke.’ He said radio wouldn’t play anything that encouraged young people to smoke.” So Gernhard and the McCulloughs returned to South Carolina, and re-recorded the song at Richland Custom Recording. Silver had told them to record it ‘flat’ (ie. without echo or other embellishment), but Gernhard, Williams, and everyone else thought that he meant to sing it flat (ie. off-key). In the end, they just sang it the only way they knew. Williams sang and played piano; Stan Hardin played guitar; Albert Hill played bass; and Willie Morrow was on drums. The Zodiacs comprised Henry ‘Shane’ Gaston, who sang the oft-imitated falsetto part; Charles Thompson, and Willie Bennett. Silver released it, and on November 21, 1960, it reached the top of the pop charts. Those who tabulate such things say that it is the shortest record ever to reach #1.

We last encountered Maurice Williams in our ‘1957’ volume when he led the Gladiolas on the original version of Little Darlin’. When Williams left Excello Records, he was prohibited from using the name Gladiolas, but someone in his entourage saw a foreign car (perhaps a British Ford Zodiac) and they became Maurice Williams and the Zodiacs. Stay proved to be a valuable copyright. The Hollies, Four Seasons, Rufus & Chaka Khan, and Jackson Browne all had hits with it. Williams had a few more fleeting hits, but chart success otherwise eluded him. In the mid-1960s, he and the Zodiacs donned Beatle wigs and sang British Invasion songs. Phil Gernhard made good in the new era, though. He wrote the bubblegum favorite Snoopy Vs. The Red Baron, and then discovered a singer named Kent Lavoie whom he transformed into a pop sensation named Lobo (Me And You And A Dog Named Boo). He also produced Dion’s Abraham, Martin And John and the Bellamy Brothers’ Let Your Love Flow.