(2017/Modern Harmonic) 12 Tracks - First ever reissue of this super rare 1959 Hillbilly concept album about working in the TX oil fields! On blue vinyl!

Slim Willet will forever be remember as the composer of ''Don't Let The Stars Get In Your Eyes".

The song was a monster Hit in 1952, initially for Slim Willet himself, then for the likes of Skeets McDonald, Ray Price, and Red Foley. The song also made inroads into the pop field, with successful covers by a slew of pop singers, including a number one hit for Perry Como in 1953. Ironically "Don't Let The Stars Get In Your Eyes" was the 'B' side of Willet's second release on his own 4 STAR Custom pressed SLIM WILLET label. Slim gleefully recalled in a 1950's article in COWBOY SONGS, that 4 STAR had written to him upon receipt of his masters advising him that "Don't Let The Stars Get In Your Eyes" was - quote - "Off beat, off meter, off everything, and would not sell". Needless to say when the record started to attract considerable attention, 4 STAR speedily reconsidered their position, brushed aside any doubts they may have harboured about the song, and signed Slim Willet to a recording deal.

Before taking a closer look at what led on Item the success of "Don't Let The Stars Get In Your Eyes", it would perhaps be better to first take a glance at Willet's formative years in order to put events into perspective. Slim Willet was born Winston Lee Moore on 1st December 1919 in Erath County, Texas, a rural setting situated a little south of Highway 20, halfway between Fort Worth and Abiline. After leaving high school Slim worked as a cotton picker, truck driver, carpenter; and rock mason before a stint in the US Army during the second world war. After the war, in 1946, Slim enlisted at the Hardin-Simmons University in Abilene to take a course in Journalism. In 1948, the final year of the Course, Slim took on the job as the station manager of the University's radio station. That experience whetted Slim 's appetite for radio work, and upon his graduation from University in 1949 he secured himself a job at Radio Station KRBC in Abilene.

In his spare time Slim dabbled at songwriting, his first succesful composition was with "Pinball Millionaire", although it is not quite clear whether or not Willet was the sole writer of the number. Willet claimed the song was his, but the songwriter credit on Hank Locklin's 4 STAR recording of the number lists the composers as Leisy-Willet-locklin, to further compound the confusion Gene O'Ouin's version on CAPITOL only credits Hank Locklin as composer! In addition to his radio work, and songwriter, Slim was also singing in and around Abilene. In 1950 Slim landed a recording contract with the Dallas based STAR TALENT label.

His first session for the label produced "I'm A Rol pusher Rom Snyder", which generated a great deal of interest and sales in the Lone Star State. Sensing the numbers potential, and seeking to broaden it's appeal, STAR TALENT reissued the song retitled as "Tool Pusher on A Rotary Rig". The ploy was successful, unfortunately perhaps too successful, because Jimmie Dolan covered the song for CAPITOL records, and although only pure conjecture, Dolan's cover version must have had an impact on the sale of Willet's original version Two further sessions for STAR TALENT followed, producing another three releases for Slim Willet on the label. After STAR TALENT Willet recorded two songs for 4 STAR, both were released in the labels 'X' series. His initial brief spell with 4 STAR introduced Willet to the 4 STAR custom pressing service, and his next release was on his own SLIM WILLET label, released in 4 STAR's 'OP' Custom series.

Meanwhile back at Radio Station KRBC in Abilene, Wiliet was spinning discs daily, Monday to Friday, 1.30pm thru 2.30pm; whilst at the weekends, he was presenting a busy schedule each and every Saturday, starting with a religious programme at 8 O'clock in the morning, culminating with his appearance as the emcee of The Big State Jamboree in the evening. It was one Saturday night after the Big State Jamboree, in the 1200 seater Auditorium in Abilene, that Slim Wiliet set up his recording equipment to record "Don't Let The Stars Get In Your Eyes". He was backed on the recording by Shorty Underwood And The Brushcutters.

Underwood's band around that time comprised of Jean Stansbury on guitar, who had recorded a duet with Wilier for STAR TALENT; Georgia Underwood on bass, Vaughn O'Sheild's, who would later record in his own right for IMPERIAL as Vaughn Shields, on steel guitar; Price Self on piano; Earl Montgomery doubling on guitar and bass, with Shorty himself playing fiddle, in a very distinctive style.

As we have already seen "Don't Let The Stars Get In Your Eyes" was an incredible hit for Wallet 4 STAR now got fully behind Wallet, and put the full weight of their promotional machinery to work, desperate to find a follow up hit to "Don't Let The Stars Get In Your Eyes" Although he cut another two dozen or so sides for 4 STAR over the next twelve months, Wallet was unable to repeat the success of "Don't Let The Stars Get In Your Eyes". 4 STAR even leased Willet material to DECCA, in search of elusive follow up hit. It was around this time that Wallet and 4 STAR label owner Bill McCall allegedly fell out over royalty payments. Having, by one means or another, secured the payment of monies owing to him, Wallet quit 4 STAR in 1956 and set up his own EDMORAL label in Abilene. Less than a year later Wallet changed the name of the label to WINSTON. Throughout the eight or nine years that WINSTON was active, the label issued some first rate Texas Country discs, and some tough rockers. Wallet diversified his business interests by purchasing radio Station KCAD in Abilene. 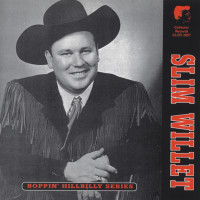 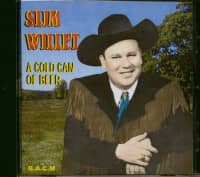