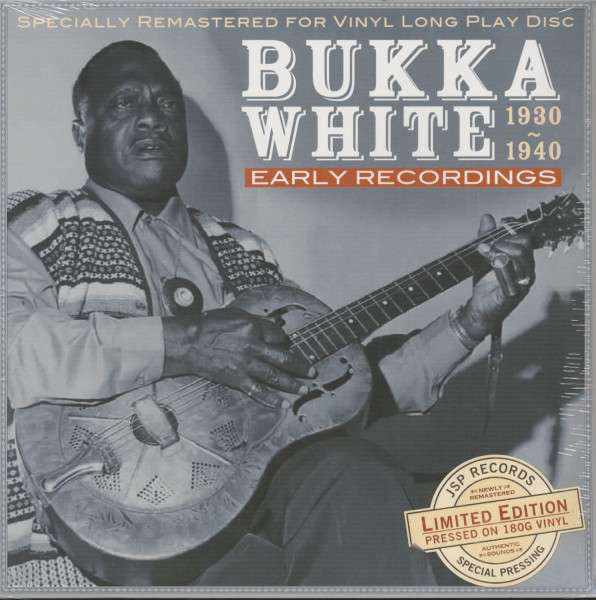 (JSP) 14 tracks - Newly remastered and pressed on 180g vinyl
If it wasn't for the Pavlovian idolatry devoted to the works of Robert Johnson, then Bukka White's extraordinarily personal and powerful songs recorded over two days in Marcia 1940 would receive the respect and estimation they deserve. Summoned to Chicago by session fixer Lester Melrose, he arrived with a safe selection of 'covers' that Melrose summarily dismissed, telling him to come up with something 'original'. White went hack to his lodgings and delved within himself' to create a sequence of songs that dealt with his trial and committal to Parchman Farm the previous year. He also wrote about the deaths of his mother and friends, and ailments of his own he thought were threatening his life. These bleak texts were ameliorated by a bubbling dance tune and the last of his great train songs. His previous recordings had been few and spoke more to the strength and stamina of his performance than to the sensitivity that permeates the later songs. As good as Johnson may have been, he enacted the sentiments expressed in his overtly emotional songs. His sometime partner Johnny Shines asserted that Johnson refined his material until it achieved the effect he was aiming for. It was a technique that few others would attempt or achieve. Bukka White's songs exuded honesty and directness enhanced by an artistic insight that Stopped short of contrivance.

Booker T. Washington White was born in Houston, MS on November 12, 1909. His father John worked on the railroad and played for frolics at the weekend, so Booker was brought up on his grandfather's farm. John White played guitar, mandolin, violin, saxophone and piano. He gave his son a guitar as a ninth birthday present. 'He read any kind of music you could put on paper. I started off like that but it was too much complicated for me.' His grandfather put him to work but that was also too much for young Booker. He went into town and worked at a sawmill until he could afford shoes and a suit then made his way to an uncle who lived in Glendora. 'That was the greatest place, I believe, on God's land at that time, 'cause the people around there, they had plenty of money. They had nice automobiles and the girls was going to most certainly w'orse'n hell.' But it didn't last long. He was thirteen or fourteen when he and some friends were jumping on and off a freight train. 'When the train got a little faster than see thought it seas, they jumped off. I was scared to get off and I went ahead on to St. Louis.' There, he was taken in by club-owner Ben Wright, which enabled the young Booker to see blues men like Peak Wheatstraw and Lonnie Johnson .

'All those old players just give such a good encourage to go along to do my own thing with them.' As he matured he took to the road. In January 1928 he was in Bapterville, a black settlement in West Point, MS, where he met harmonica player George 'Bullet' Williams, playing for friends in a coffee house. 'When he put that harp up to his mouth, he make your hair start to walk on your head!' Williams led a rootless existence and Bukka fell in with him. 'We went through Charleston, through Grenada, went to Hickory Flats, New Albany, Holly Springs, all them places from there down to the Delta.' Williams journeyed north in May to record for Paramount without Bukka, it appears. In the early 1930s Booker made his way to Memphis, where he fell in with Frank Stokes. He seas discovered by talent agent Ralph Lembo, who took him to Victor Records along with Napoleon Hairiston, who sings lead on The New Frisco Train. Booker performed The Panama Limited solo - the 'Bukka' spelling came at this time from a mis-spelt recording credit. There was also a gospel single from amongst some fourteen titles, most of which are lost. In 1934 Bukka married Bullet Williams' niece, Susie Simpson. It was his second marriage. Aged sixteen he'd married Jessie Bea, who died of a ruptured appendix three years later.

Bukka wouldn't record again until 1937, but despite its later popularity Shake 'Em On Doran failed to impress on its release. The following year he got involved in a shooting that landed him in Camp 10 at Parchman Farm. In May 1939, Alan Lomax brought his recording equipment to the camp and Bukka cut a couple of songs, one the immaculate Po' Boy. His prison experience would inspire the songs he'd cut for OKeh the following year. But it wasn't all bad. 'The way they'd do us good musicians, we'd go from one camp to another. I couldn't be treated no better.' On his release, Lester Melrose made contact with him and Bukka travelled north to Chicago. Even though country blues was losing its commerciality by 1940, Melrose partnered him with Washboard Sam, a star in his own right but a willing accompanist. The session was a palpable success. There's dignity and a quiet passion in the darker songs recorded over those two days. The darkest is surely Strange Place Blues, in which Bukka laments the death of his mother. But there's a further dimension: 'After they put my mother away, I thought my wife would take her place/ I show you the difference in mother and wife, ow, well, nay wife done throwed me ass-ay'. This wasn't the only death he contemplated: Flom' To Die was inspired by a friend, Flem Smith, while he contemplated his own demise; in Good Gin Blues another friend (and alcoholic) Tod Walker is remembered and in High Fever Blues, it's the death of an old girlfriend, Mary Johnson. The prison songs were just as revelatory. ltiren Can I Change :ify Clothes underlines the indignity of prison uniform; District Attorney Blues repeats 'sure is hard on a man' in every verse; and in Parchman Farm Blues his concern is for his wife rather than himself. The mood lightens for the last three recordings. Aberdeen Mississippi Blues celebrates his supremacy over the town's women and their men's resentment. Bukka's Jitterbug Swing encourages women to dance, 'then you'll be doing the thing'. And he describes his own reaction to their capering: 'you gonna drive me in my blood'. Washboard Sam is in his element, lifted by Bukka's instrumental breaks. The session ends with probably his finest train blues, Special Stream Line. His garrulous narrative is interlaced with imitations of a train rumbling over the points and blowing its whistle. All the while, Sam belabours his washboard in ever wilder syncopations. The effect is truly uplifting and worthy of multiple hearings.

Melrose himself was moved. 'I never had a man, black or white, kiss me dead on the mouth before but that's what he done. He said, "I've been on this job 35 years and I never seen a man do what you done in two days. When you came up here before, you had what all the rather folks had. But this stuff is Bukka White all the way." 'But success still eluded him. He returned south and got a real join for a change. He gave up music except when playing for friends' In 1963, Ed Denson and John Fahey used the postal service to find him, took him to California and made the first of what would be many albums. Bukka White was more popular than he'd ever been. He toured America and Europe, thrilling audiences wherever he played. It remained the case until his death from cancer on February 26, 1977. Written by Neil Slaven