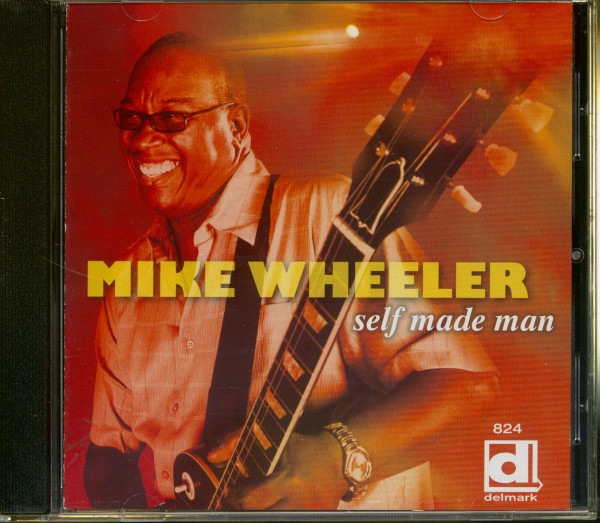 Mike Wheeler: Self Made Man

Mike Wheeler has been playing the blues for almost 30 years and has played with Koko Taylor, Buddy Guy, B.B. King , Shemekia Copeland, Jimmy Johnson, Son Seals, Willie Kent and a who's who of today's Chicago Blues!!. Mike is an extraordinary blues singer, songwriter and guitarist. He wrote most of the material on Self Made Man including the title track where he sings 'I'm a self made man and I made myself have the blues'.

Mike is accompanied by his regular group including Brian James, keyboards; Larry Williams, bass; Cleo Cole, drums and special guest Omar Coleman, harmonica on three songs. Others songs include 'Get Your Mind Right', 'Movin' Forward', 'I Don't like It Like That', 'Here I Am', 'Join Hands'...

Learn more about Mike Wheeler
'I WOULD SAY THAT THE BLUES IS ABOUT EVERYDAY UFE, THE DEALINGS THAT PEOPLE GO THROUGH IN... more
Close menu
"Mike Wheeler"

'I WOULD SAY THAT THE BLUES IS ABOUT EVERYDAY UFE, THE DEALINGS THAT PEOPLE GO THROUGH IN RELATION-SHIPS AND WORK -YOU KNOW, JUST EVERYDAY IJVING.'

Mike Wheeler's blues, like his conversation, invoke images of a serious-minded man who nonetheless lives in a celebratory way – a hard worker willing to take some lumps on his journey toward victory, but who refuses to sacrifice either his pride or his happiness to attain it. 'I'm a joyful person,' he attests, expanding on his theme of what his music means to him and what he wants it to convey. 'I'm not really into a bunch of negative stuff and being mad all day and stuff like that, so I guess that reflects in the music. I figure that songs should tell a story instead of just going everywhere with it – a beginning, a middle, and an end.' Mike's attitude may be a far cry from the old 'tortured blues poet' stereotype, but it's appropriate for a man whose earliest blues memories are inseparable from his recollections of the loving household he grew up in.

Born in Chicago in 1961, he found himself surrounded my music almost as soon as he was old enough to know what it was. 'When I was young,' he remembers, 'my mother played all of it; she played R&B and soul and blues and everything, so we listened to everything in my house. She used to play the old Muddy Waters stuff, and man, that just attracted me. Something about that sound; I loved that. B.B., Albert King, Freddie King – I liked blues at a young age.' It didn't take long for his enthusiasm to bear fruit. By the time he was in his teens, he'd already begun sowing the seeds of his eventual musical career. Bassist Larry Williams, a close friend and bandmate to this day, was one of his earliest influences. 'I met him when I was a teenager,' Mike recalls. 'He had a professional band that was already gigging. Those were the kind of guys I hung out with. I hung out with musicians, and they knew the blues stuff, they new the R&B cats, they knew the rock cats.' Nonetheless, it was the rootsier 12-bar Chicago style that proved to be his call-ing card, at least at the beginning.

His first straight blues gig, he remembers, was a mid-'80s stint in the band of pianist Lovie Lee, a former Muddy Waters sideman and stepfather of fabled harp maestro Carey Bell (they held forth at a North Side bistro called Lilly's). A few years after that, he hooked up with guitarist Charles 'Chuck-a-Luck' Crain in an aggregation called the Park Avenue Players; he also worked with bassist Joan Baby and vocalist Nellie 'Tiger' Travis (who has since gone on to make a name for herself on the southern soul-blues circuit). When he joined harpist Cadillac Dave's hard-driving aggregation in about 1995, he found his territory expanding into the Chicago suburbs; a subsequent gig with bassist/vocalist Sam Cockrell returned him to the South Side circuit he'd traversed with Chuck, Joan, and Nellie. Finally, in 1998, he joined trombonist/funkmeister Big James Montgomery and his Chicago Playboys, a gig that brought him greater exposure on Chicago's North Side and also resulted in his first excursion overseas.

Like a lot of other American bluesmen, he was astounded by the adulation he received there. 'Switzerland,' he remembers with still-palpable awe. 'People treated us like we were famous. I was like, 'Wow!' It was kinda hard coming back home and being normal!' Mike stayed with the Playboys until 2011, but during this time he also began to forge a name for himself as a front man. 'I started leading my own band in about 2001,' he recounts. 'It was Sam Greene on the bass, Cleo Cole on the drums, Lawrence Fields on the saxophone, Brian James on the keyboards, and myself. I first started writing songs around the time of my first CD (a self-released disk titled THE MIKE WHEELER BAND), I guess around 2003.

We were mostly just selling it at shows; it wasn't in the stores.' One evening at the club B.L.U.E.S. on North Halsted, Delmark's Steve Wagner came in to tape Mike and his band for a live recording to be streamed online. Im-pressed with the band's stylistic versatility as well as Mike's own vocal prowess and improvisational eloquence, he suggested that Mike might want to come to Delmark and record. The result was this CD — a set that exemplifies the Mike Wheeler approach to blues expression. His band consists of three longtime compatriots (bassist Larry Williams, keyboardist Brian James, and drummer Cleo Cole) along ... 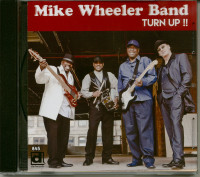