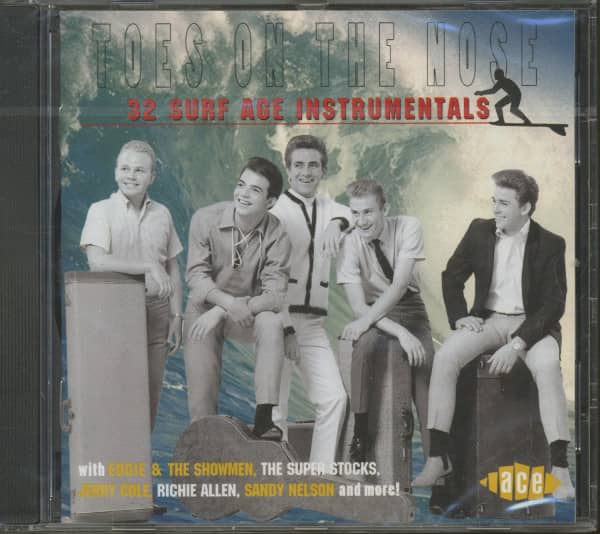 Various: Toes On The Nose

(ACE Records) 32 tracks
The years 1963-65, from which the 32 tracks here are taken, witnessed the explosion of surf music as a major new genre. Several things contributed to the sudden growth of the style, especially in Southern California, its epicentre. Dick Dale and his band had established themselves as a big draw on the live circuit with wide-ranging and attacking playing, his guitar work pretty well setting the standard to which other local bands aspired. There were also advances in guitars and amplifiers, with Leo Fender working hand in glove with Dale to develop the new Showman amp. Once perfected, sales of Fender equipment went through the roof, and even inspired the first act on this collection, Eddie & the Showmen, to name themselves after the amp.

The Showmen’s Eddie Bertrand had been with the Belairs, whose ‘Mr Moto’ is often cited as one of the first surf hits. Forming his own group, he took much of his reverb-drenched guitar style from Dick Dale. His tight outfit released several singles onLibertyand are represented here with ten tracks. Another act, on Liberty affiliate Imperial, was drummer Sandy Nelson, already a well-established artist. His playing, as evidenced on ‘Casbah’, easily adapted to the surf sound, and he went on to cover many other surf hits on his albums.

Capitol Records were the other major pop label on the West Coast. They are probably best known as the home of the fast-developing Beach Boys, who drove the vocal form of surf. Capitol recognised the strong following for surf instrumentals and issued many albums to milk the popularity. The records were very high quality, featuring experienced session players and producers. One such producer was the young Gary Usher, a friend and writing partner of Beach Boy Brian Wilson. Usher quickly saw the potential of surf music and used a close circle of players to provide numerous albums of quality material for Capitol to issue under a variety of names. Prominent here are the Super Stocks, utilising the talents of guitarist Richie Podolor, with eight fine tracks. Essentially the same players recorded as the Ghouls, here with a further three titles. Another key musician featured on several tracks is drummer Hal Blaine, underlining the quality of the players involved.

When you listen to the exciting playing on these tracks it is easy to see why surf music has remained so popular, spawning so many contemporary groups around the world. Listen and be converted.