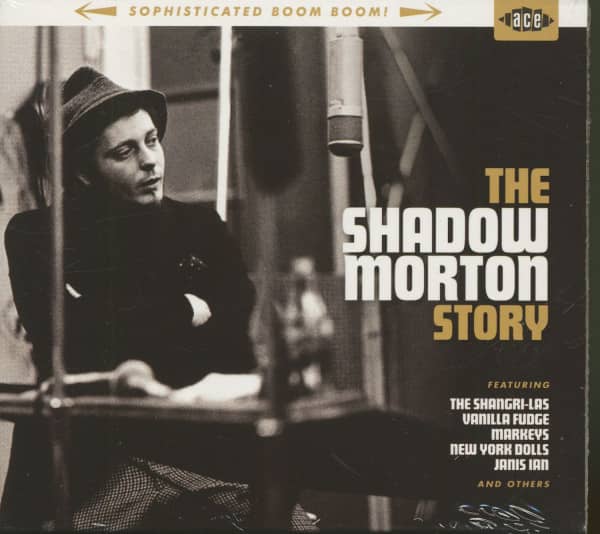 “Producers are quirky, conceptual people,” David Johansen of the New York Dolls once said. Few fit that description better than George “Shadow” Morton, whose career we celebrate in this latest addition to our long-running Producers series.
When news reached Shadow this collection of his productions was in development, he let it be known he would like to be involved in the project. I was provided with his email address, along with a password for use in the subject line of all communications, to guarantee a response. I fired off a quick (quite gushing) email asking for an official interview, to which he readily consented, requesting that I address him as Shadow. Over the ensuing months, I sent some leading questions, which he duly answered, although his replies were invariably a long time coming. He deserved that nickname of his, I thought. With a trip to the USA on my horizon, in hope of moving things along, I plucked up the courage to phone and ask if it would be possible to meet in person, to which he again agreed. Then nothing. My trip came and went and further emails remained unanswered. My initial disappointment turned to sadness a few months later when I heard Shadow had died.
The fruits of our unfortunately curtailed correspondence are contained in the CD’s accompanying booklet, together with excerpts from earlier interviews conducted by Richard Arfin, Bob Goodman, Lenny Kaye, Ralph M Newman and Genya Ravan, all of whom deserve commending for jobs well done. Our combined efforts enable the enigmatic producer/songwriter’s story to be told in full for the first time.
The collection covers Shadow’s career from his debut as lead vocalist with the Markeys and the Lonely Ones through to the New York Dolls’ “Too Much Too Soon” album. Also included are tracks by the Beattle-ettes, Shangri-Las, Goodies, Ellie Greenwich, Shaggy Boys, Nu-Luvs, Janis Ian, Blues Project, Vanilla Fudge, Vagrants, Iron Butterfly and Mott The Hoople – everything from 1950s doo wop to 1970s glam-punk via girl group melodramas and Long Island psychedelia. In other words, a very varied listening experience.
Along with a 12,000-word essay, the sumptuously illustrated 36-page booklet features many rare photographs, including some supplied by the Morton family.
By Mick Patrick