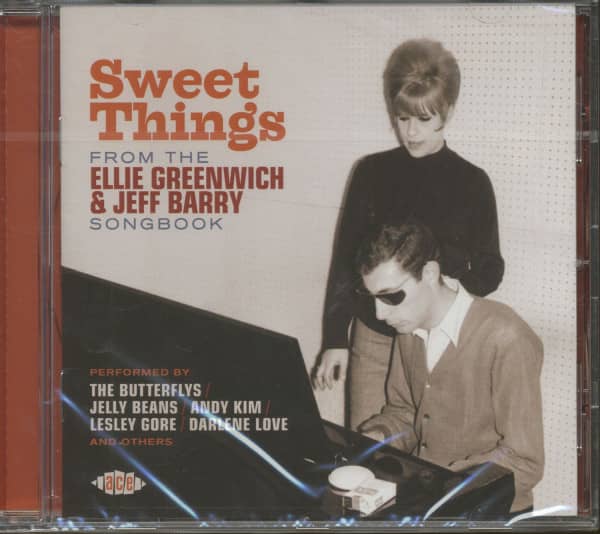 (ACE Records) 24 Tracks, 1963-78, 20-page booklet. Ellie Greenwich & Jeff Barry were the quintessential Brill Building songwriting team. Hear what made them so special in Ace's third collection of hits and overlooked gems from their songbook.

Greenwich and Barry were the quintessential Brill Building songwriting team. Hear what made them so special in this set of hits and overlooked gems from their songbook.
“Sweet Things” is Ace’s third volume of songs written by the uncrowned king and queen of the girl group era. Although Ellie Greenwich and Jeff Barry first met when they were children, their mutual love of music drew them closer in the early 1960s. They married in 1962 and began writing together. The following year was a huge success for them, filled with pop standards-to-be. Although their partnership was over by 1968, the body of work they left behind is among the greatest and most familiar from this glorious period of US pop.
With two volumes already available, you might expect the well of hits to have run dry, but on this third collection there are classics aplenty. There can’t be many pop aficionados who aren’t familiar with ‘Leader Of The Pack’ or ‘Then He Kissed Me’, for example, but these are songs one can never hear too often. The hits are counterbalanced with a selection of lesser-known titles. The Jelly Beans’ ‘Whisper Sweet Things’ and the Dixie Cups’ ‘Little Bell’ ooze charm, and it’s always a joy to hear Lesley Gore singing anything; here she lends her voice to the divine ‘What’s A Girl Supposed To Do’, featuring backups from Ellie herself. The Ronettes’ ‘I Wish I Never Saw The Sunshine’ is surely one of the apogees of Phil Spector ’s work, dynamic and devastating in equal measure; it’s astonishing to think this was left in the can in 1966. Jeff’s bubblegum era is acknowledged with a cover of ‘Be My Baby’ from Andy Kim and (at one remove) Wilson Pickett’s re-reading of ‘Sugar, Sugar’. Ellie’s work from this period is represented by Dusty Springfield’s ‘What Good Is I Love You’, written with Mike Rashkow. Tony Pass’ ‘Spring Fever’ makes its debut on CD here, while a recently-unearthed Paley Brothers recording of ‘Baby, Let’s Stick Together’, produced by Phil Spector in 1978, rounds off the collection perfectly.
The track-by-track commentary is entertaining and enlightening, and the package is chock-full of the kind of photos and memorabilia you come to expect from Ace CDs. “Sweet Things” is another exemplary addition to their Songwriters series.
Harvey Williams

$15.38
Sweet Things - From the Ellie Greenwich And Jeff Barry Songbook