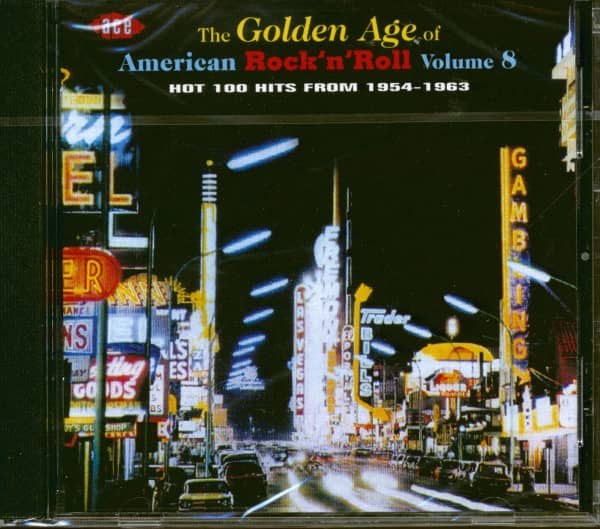 It all began when Rob Finnis became engrossed in a book entitled 'A Beginner's Guide To Psychic Phenomena And The Spirit World'. Keen to put his theories to the test he sought the co-operation of Trevor Churchill. Then he roped in John Broven. The "Golden Age" gang was back in town. Their mission: to invoke the spirit of Alan Freed, the legendary 50s deejay credited with coining the phrase rock'n'roll. Rob had it all worked out. All John and Trevor had to do was turn up at the appointed time.
None of Ace's staff gave the three men a second glance as they slipped into Ace's conference room for what appeared to be a typical workaday meeting. Inside, already seated at the polished mahogany table, was Mrs Ivy Grenfell, an elderly medium chosen at random from the Yellow Pages, mainly on the strength of the endorsement "as recommended by Glen Hoddle".
She spent a few moments outlining the procedures involved before asking for the lights to be dimmed. At this point the four participants all held hands while Mrs Grenfell began muttering strange incantations.
John and Trevor soon had a "tell-me-this-isn't happening" look in their eyes while Rob simply looked worried. What where they getting into? What would [managing director] Roger Armstrong think? Was this the best use of Ace's time and money?
Mrs Grenfell's voice reached hyena pitch as she strove to summon the elusive spirit of the legendary deejay from the recesses of the beyond. Then came the faint crackle of static or "radio interference", unknown to the younger generation weaned on the pristine signals of FM but familiar to older persons who had spent their teenage years tuning in to Radio Luxembourg.
By now Mrs Grenfell was bobbing uncontrollably in her seat, her eyes firmly focused on some vision only she could see while beads of sweat were beginning to form on the foreheads of the three men. Suddenly, a faint voice was heard to rise above the static. It appeared to emanate from Mrs Grenfell but in the gloomy half-light, no-one was quite sure.
"I can hear ya! This is Alan... am I getting through? This is Alan Freed. Can you hear me?"
Rob: (weakly) 'Um, Alan, is that you?'
Trevor: (taking the initiative) "What do you think of the new "Golden Age", Alan?"
Freed: 'Let's see. The Cadillacs... Speedoo - we played that a lot on WINS. That was a hit around the time Elvis came out with Heartbreak Hotel. Speedoo was already on the charts. They were ahead of the game. Hey! The Impalas with I Ran All The Way Home. I published that tune. My manager and I got those guys the deal with
M-G-M Records. Great record!... Wicked Ruby by Danny Zella - never heard of that one. Was he a rock'n'roller?'
John: "He was a rockabilly guy from Detroit."
Freed: 'Oh, a rockabilly! Heavens, I made a social error!' (Getting in to his stride)... Rochell & The Candles. Now that's terrific. 'Course, I'd moved out to California by the time that came out. I used to play it a lot on KDAY. Same with Jimmy Norman and Lonnie Russ. They all came outta' the West Coast...Gee, it's great seeing all this stuff again ... (turning sentimental) ... George Goldner* woulda' been proud of you guys..."
(*Legendary 50s record boss famous for discovering Frankie Lymon.)
John: "Kind of you to say so. Tell me Alan, have you ever thought of coming to work for Ace?"
Freed: "Gee, guys, thanks - but no thanks. Can you imagine going through this every time you wanted to ask me a question."
Trevor: "It would never work. Ray would object."
John: "Perhaps you could help us with the next "Golden Age"."
Freed: "Love to. Put my face on the cover and I'll do it for nothing!"
Trevor: "We'll get Mrs Grenfell here to pass on the track listing to you when we get it together."
Suddenly, in that instant which divides reality from the Twilight Zone, there was the sound of a door opening followed by the 'click' of a switch. A blaze of light filled the room. The three men looked up to see the forbidding figure of production manager Carol Fawcett silhouetted in the doorway. Her voice had a very terrestrial resonance: 'WHAT ON EARTH is going on in here? Does Roger know about this?" Moments later, the trio were seen trooping forlornly out of the room in single file under Carol's reprimanding glare.
So there you have it. Far fetched? We thought so too until Mrs Grenfell's bill arrived a couple of weeks later.
PS. As always, a lot of hard work has gone into this latest volume in the "Golden Age" series, that scintillating mix of major and minor hits from the Hot 100 (1954-63). Practice makes perfect but believe us, this doesn't make it any easier. We take an uncompromising stand over every detail including tape sources and even at the eleventh hour we were scouring the States for a better tape of one particular title. In the event, we had to substitute another song at the last minute but, strangely enough, the final selection was all the better for it. An example of the organic process that makes this series such a fascinating endeavour.