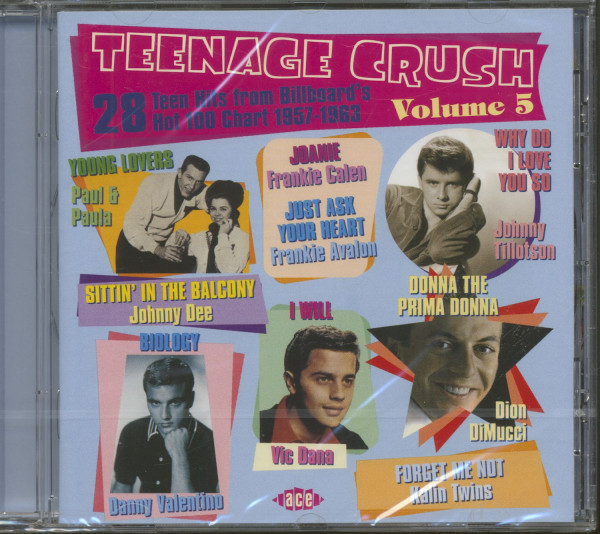 (ACE Records) 28 tracks 1957-63 with 24 page color booklet
There’s a little corner of Ace Records where it’s forever 1959, a parallel universe where the kids rush home from school, switch on the TV in the corner of the living room (no multi-set homes back then) and ogle the pop stars of the day miming to their latest and - more often than not - only hit on American Bandstand. Vietnam is half a decade away, the Beatles are still strumming cheap plywood guitars in Liverpool coffee bars and students dig jazz and folk while sneering contemptuously at pop music.
Don’t let anyone tell you it was better back then because it wasn’t, but here at Ace we’ve always had a soft spot for the teen ballads and angst-ridden pop which defined the innocence of that age and, judging from your response to previous volumes of TEENAGE CRUSH, many of you share this guilty pleasure. Please join us in celebrating the launch of this fifth volume in the series.
There are several reasons why we happen to believe that this may be the best “Teenage Crush” yet. Previously, we have mixed better known hits with harder-to-find items but this new volume contains a higher proportion of scarce and collectable Hot 100 one-offs than before. As many as 15 tunes are appearing on CD for the first time: Joanie by Frankie Calen, Biology by Danny Valentino, Paul Dino’s mildly eccentric Ginnie Bell, ’Deane Hawley’s Look For A Star, Bobby Hamilton’s long overlooked Crazy Eyes For You, Push Push by Austin Taylor (the original of Billy Fury’s UK hit) and Summer’s Comin’ by Kirby St Romain - actually his real name! - are just a few of the sought-after genre classics heard here for the first time.
The same careful attention to detail accorded to “The Golden Age of American Rock’n’Roll” by the compilers of that series, has been brought to bear on “Teenage Crush Vol 5”. Tracking down the original masters, contacting many of the artists, and locating the wealth of illustrations shoehorned into the glossy mega-booklet, occupied so many man hours, that our accountants laughingly told us we should charge £100 a time rather than the more modest sum you are likely to pay. State-of- the-art mastering and comprehensive notes round off a mighty fine package.
By Rob Finnis