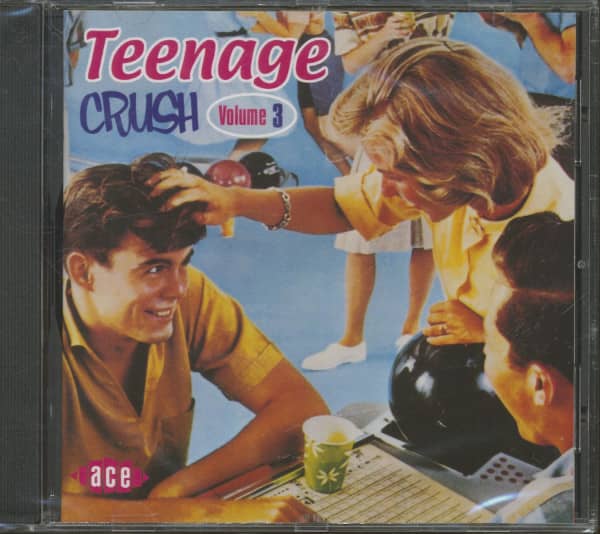 (ACE Records) 28 tracks
'Teenage Crush' benefits from the same characteristic attention to detail as our ground-breaking 'Golden Age Of American Rock 'n' Roll', the only significant difference between the two series being in the choice of repertoire. Whereas 'Golden Age' encompasses the widest possible range, 'Teenage Crush' confines itself to teen ballads, teen idols and 50s teen angst in general. Drawn from the US Hot 100 charts of 1957 - 1964, this is music from the softer end of the oldies spectrum which is not to say that the social and cultural impact of such material was any less important than the harder edged stuff. In fact, one might argue that once the initial impact of rock 'n' roll had subsided, this was the dominant music of the period.
This third volume of 'Teenage Crush' contains several titles that have rarely appeared on CD except on mixed bag compilations dating back to the earliest days of the digital revolution. These include: Midnight Mary by Joey Powers, Gino & Gina's charmingly gauche Pretty Baby, the atmospheric Heart by Kenny Chandler, sullen-sounding Rod Lauren's If I Had A Girl, James Gilreath's infectious Little Band Of Gold, Donnie Brooks' bouncy Mission Bell, and the white doo-wop of Donnie & The Dreamers' Count Every Star. Now you can nail these and lots more elusive goodies once and for all in the best possible audio and in the right contextual setting.br>
Glen Campbell had his first hit with Turn Around, Look At Me, on the small Crest label back in 1961- long before he became a household name. This title has appeared on CD only once before and is not to be confused with the commonly available Capitol re-recording. Our stereo studio master of Tommy Roe's million-selling Sheila has been matched with the original mono 45 which
was speeded up slightly at the mastering stage back in 1962, while Ray Peterson's Corrina, Corrina is the original hit version (on the Dunes label) produced exclusively in mono by a 20 year-old Phil Spector. Previous re-issues of this record purporting to be the stereo master are actually a note-perfect re-recording dating from 1964.
As you'd expect, the packaging is a gloriously frothy concoction brimming from cover to cover with rare period ads and memorabilia. Our accountant must have been looking the other way when production manager Carol Fawcett allocated the budget. In conclusion, Teenage Crush 3 is an essential complement to Ace's 'Golden Age Of American Rock 'n' Roll', 'Teen Beat' and 'Early Girls' compilations which, between them, constitute the definitive history of pre-Beatles pop.
by ROB FINNIS