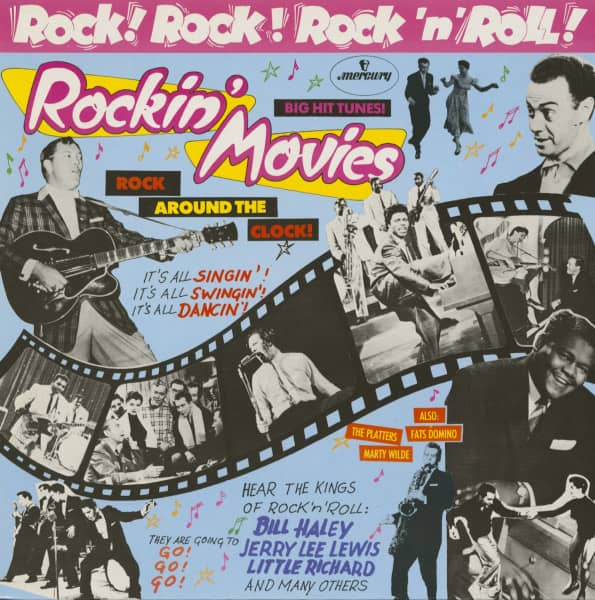 (Phonogram/Mercury) 12 tracks - rare german pressing
At the beginning, the only thing connecting rock 'n' roll films with the music was the spirit of this movement. "The Wild One" (1953), starring Marion Brando, was typical for this type of film. It portrayed unruly youth, which hated every sort of normality and despised every sort of mediocrity to its full due, rebelling against the rigid world of the grown-ups. James Dean became a teenage cult idol. Nobody could reflect the complicated emotional world of his fans like he could.

It was not until 1955 that rock music celebrated its entrance into the scene of celluloid drama with "The Blackboard Jungle", a typical highschool film. The soundtrack, "Rock Around The Clock" with Bill Haley And His Comets, inspired adolescents to hand-to-hand fighting. The teenagers brawled in the balconies, fought in the stalls and slit open the cinema seats by the row. The film established rock 'n' roll as a cultural phenomenon and the music developed into the best possible bait for the sale of these screen epics. Bill Haley's film debut was also the starting signal for countless following films that catapulted rock 'n' roll songs to hits.

Particularly sensational was the Little Richard soundtrack "The Girl Can't Help It" (1957) and the drug accented scenario "Highschool Confidential" (1958) with Jerry Lee Lewis' title song, in addition to such hits as Fats / Domino's "I'm Walking", "Only You" by The Platters and I Freddie Bell's "Giddy Up A Ding-Dong". When, in the early 60's, stars like Chubby Checker started twisting around the stage, the classical rock 'n' roll film was carried to its grave.