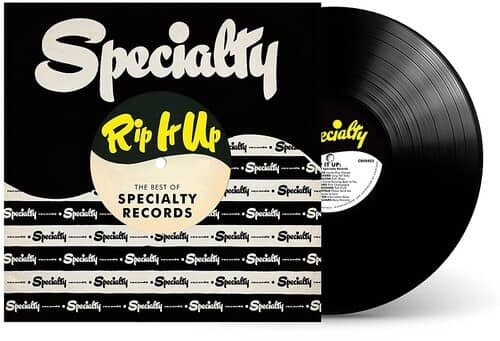 Various: Rip It Up - The Best Of Specialty Records (LP)

In Southern California in 1945, a young man named Art Rupe saw an opportunity in the major label neglected R&B market. Rupe was known in the 1950s as one of the most honest owners of an independent R&B record company. He made sure that his artists were paid fairly, their recordings were done decently and artists were allowed to create freely - resulting in some of the wildest R&B records released at the time.

Specialty signed many influential artists in the years that followed, including Jimmy Liggins, Percy Mayfield and Lloyd Price. Hits stagnated in 1953-54 and the company struggled before rising to its greatest heights - thanks to the signing of Little Richard.

In the decade and a half from 1945, Specialty Records had a huge impact on the gospel, rock 'n' roll and R&B fields, and this compilation integrates some of Specialty Records' most important recordings - with tracks by Little Richard, Sam Cooke, Lloyd Price, Roy Milton, Joe Liggins and more. Most of the original sessions were produced by Art Rupe himself, and the care and dedication to each track is reflected in this album.

Article properties: Various: Rip It Up - The Best Of Specialty Records (LP)