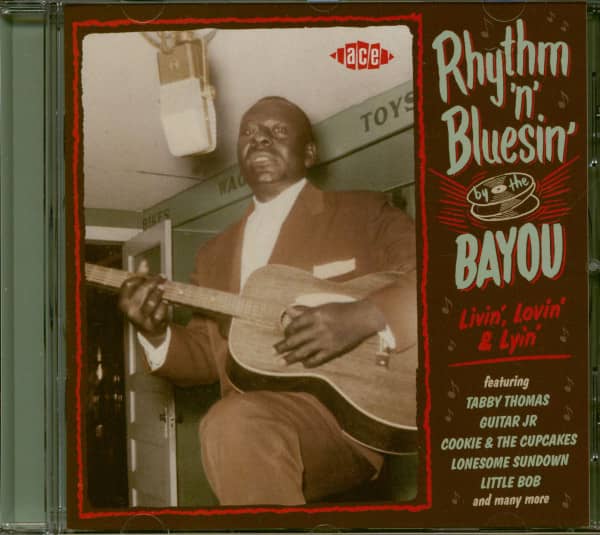 (2017/Ace) 28 tracks, 1950S, 12-page booklet with liner notes and details to every track by Ian Saddler, plus many rare photos and label scans.
-
Back in the early 50s manic Memphis DJ Dewey Phillips, the man who broke Elvis, called his radio show Red, Hot &, Blue – a wonderfully descriptive title which aptly illustrates the contents of this CD, the 19th in the “By The Bayou” series and the sixth devoted to R&,B.

Whether from New Orleans in the east or Lake Charles in the west, whether fast and furious or slow and mournful, South Louisiana’s brand of R&,B had a distinctive sound which influenced a whole generation of the state’s young rock’n’rollers, creating a blend which became known as swamp pop. Here – hidden amongst the red, hot and blue – can be heard the embryonic sounds of that music.

As previously in the series, this CD contains a mix of the famous and the totally unknown, with offerings from Guitar Jr, Lonesome Sundown and Cookie &, the Cupcakes, through cult names such as Left Hand Charlie, Charles Sheffield and Little Victor to artists for whom we don’t even have a name – each play a part in bringing you a package which runs the whole gamut of South Louisiana rhythm &, blues.

That embryonic swamp pop sound is typified by Guitar Jr’s ‘Family Rules’, a song still sung throughout South Louisiana and into S.E. Texas where the oil business took many of Cajun descent. It is artists of this background who keep R&,B alive today, while it can be difficult to find black musicians who play this genre of music. A couple of years ago Louisiana R&,B veteran Carol Fran took four of us out to find a Monday night jam session but discovered several of her old haunts closed down. Eventually she found a club with a jam going on. They were younger musicians not playing Carol’s kind of music but instantly recognised her, got her on stage and a good old R&,B blast took place.

With the dearth of this exciting music as a live entertainment, its preservation through the release of long-lost tracks gathers in importance. But, hold on, this ain’t no history lesson, this is rompin’, stompin’ music to be enjoyed – so crank up your hi-fi, slip this CD in your player, grab a glass of something you enjoy and let the bon temps roule.