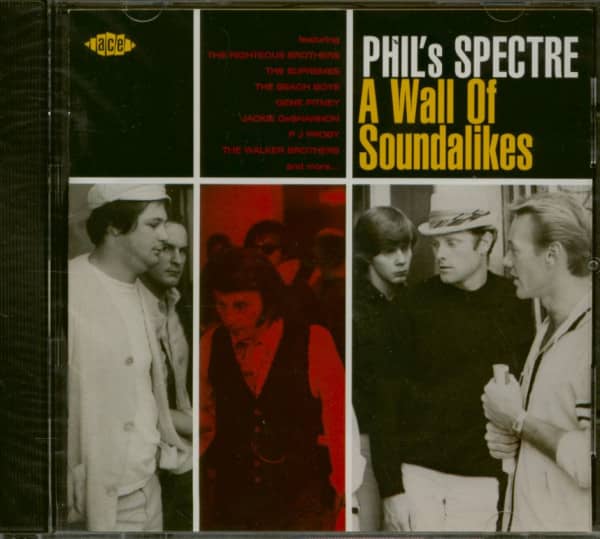 (Ace Records) 24 tracks
This compilation shows the influence of Harvey Phillip Spector in the 1960s Pop Music. Spector who was mainly known for his productions for groups like The Ronettes, The Crystals and The Righteous Brothers influenced also artists from Texas, Chicago and even the Motown Sound!
Phil Spector's vision rose far above and beyond that of any of his contemporaries. In fact, Spector saw himself as the sole occupant of a parallel recording universe where his was the only way, and everyone else was nowhere. This, to a large degree, was what made him 'different' and 'difficult' in equal measure.

One only has to hear the absorbing out-takes from some of his Philles sessions to gain an insight into the man. Hovering authoritatively in the control room at the fabled Gold Star studios, he is by turns, cocky, amusing and skittish depending on the mood of the moment. Above all, he is endlessly patient. As take after take is aborted (over 30 on Be My Baby) and the massed musicians, numbed by repetition, are audibly beginning to wilt, Spector acts as a calming presence, nonchalantly easing them into one take after another, as though their interests, as much as his, were at stake.

It took a unique man to create such historic sounds and, given his commercial success, he was bound to attract imitators.

Sundry producers, artists, songwriters and arrangers attempted to hitch a ride on the Spector bandwagon in the period spanning, roughly, 1963-1967. Some of them came tantalisingly close to getting it right, most notably those who had actually worked alongside Spector such as Sonny Bono, Nino Tempo, Jack Nitzsche and the Righteous Brothers, all of whose work is amply represented here. Others were too conventional in their approach to get it right.

Ace are justifiably proud of this release which brings together 24 of the finest mirror images of the Spector Sound. Assembled with artful deliberation by Mick Patrick and Tony Rounce, Phil'S Spectre reflects the variation in tone, colour and density that characterised Spector's own work. (Not all of Spector's productions were quite as blockish as posterity will have you believe. Take I Love How You Love Me by the Paris Sisters or Walking In The Rain by the Ronettes. These are records as subtle as you are likely to hear.)

A few tracks alone warrant the purchase of this CD. Carol Connors' My Baby Looks (But He Don't Touch) features the lady who sang lead on the Teddy Bears' To Know Him Is To Love Him being produced by another ex-Teddy Bear, Marshall Leib.

Leib also produced Alder Ray's A Little Love (Will Go A Long Way), arguably the most accurate Spector facsimile of them all. Leib once claimed he knew better than most Spector's thought processes in the studio and, on this evidence, he may have a case.

Then there's Yes Sir That's My Baby by Hale & The Hushabyes, a legendary studio concoction masterminded by Jack Nitzsche that features Edna Wright (aka Sandy Wynns) singing lead, with the Blossoms, Sonny & Cher, Jackie DeShannon and Brian Wilson, among others, buried in the massed chorus.

Carol King and Gerry Goffin wrote I Can't Make It Alone with the Righteous Brothers in mind but P J Proby got to cut it first. I subscribe to Nick Cohn's view that Proby ranks among the finest pop vocalists of the rock era. This majestic 45 was cut in LA after Proby had temporarily returned to America in 1966 following a spate of bad publicity in the UK. Jack Nitzsche's spectacular production reflects the Righteous Brothers' influence and Proby's vocal does it justice. This is the first time the 45 single version (on which Proby duets with himself) has been released on CD.

Even mighty Motown was not averse to casting a nod in Spector's direction - step forward the Supremes! As Mick Patrick tell us, their Spector-ish Run, Run, Run (a Holland, Dozier, Holland song), was recorded in May 1963, a time when Motown had yet to establish a definitive 'sound' of its own and occasionally looked to rivals such as Spector or the Cameo label as a source of inspiration. Holland, Dozier, Holland also penned Too Hurt To Cry, Too Much In Love To Say Goodbye, by the Darnells, a Motown one-off from 1963 featuring Gladys Horton of the Marvelettes moonlighting as lead vocalist. The set closes with Please Phil Spector, a fun item with an odd little history of its own. Written and sung as a throwaway by New Yorker Mike Lendell, it was licensed to a small US label as the intended B-side of Washington Square, a Lendell production the company never got around to actually issuing. However, somehow, in 1967, the record surfaced in the UK on the Phillips label credited to a non-existent band, the Attack (unconnected with the British band of the same name). Even Lendell himself was unaware, until recently, that his aborted US 45 had made it to the UK.

The booklet, as glossy and colourful as a fashion supplement only more absorbing, contains the full low-down on each title together with matching illustrations. We should mention this fond and glorious homage to the great producer was in Ace's pipeline long before Uncle Phil's tribulations reverberated around the world.