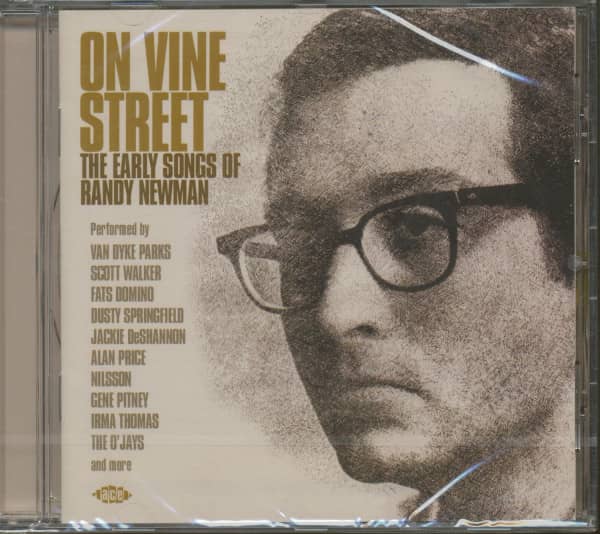 Various: On Vine Street - The Early Songs Of Randy Newman

When his composition If I Didn’t Have You scooped the Academy Award for best song at the 2002 Oscars (following 16 previous nominations), Randy Newman was probably as well-regarded for his soundtracks as for the string of acerbic and intelligent albums he has written, performed and arranged from the late 60s up to the present day. And why not? His work for Pixar (A Bug’s Life, Monsters Inc and the Toy Story films), while catering to a very different audience, can certainly stand alongside gems from his back catalogue like Sail Away, Rednecks, Short People and Louisiana 1927. However, back in the mid-60s, he was still learning his trade as a staff songwriter at Metric Music (also home to David Gates and Jackie DeShannon), and it’s from this era in his career that much of Ace’s wonderful new collection of Newman-penned compositions is sourced. “On Vine Street”, the latest in Ace’s Producers and Songwriters series, collects together timeless pop classics, in-demand rarities and obscurities – including previously unreleased recordings – forming the first ever disc to document this early period in Randy’s career.
Although born in Los Angeles, Newman spent many of his formative years in the Southern States, and while the music of Mississippi and Louisiana would have a huge influence on his later recordings, this collection displays a songwriter in love with the sound of the Brill Building, albeit one also informed by the music that must have permeated his environment from an early age: the soundtracks composed by his uncles Emil, Lionel and Alfred Newman.
The compilation is cleverly sequenced in reverse-chronological order, kicking off in 1967 with two prime examples of his “in character” songwriting style, Harpers Bizarre’s The Biggest Night Of Her Life and Alan Price’s take on Simon Smith And The Amazing Dancing Bear. It’s this song which Newman often quotes as the one which fundamentally changed his method of composition: the point at which he realized that the composer could write at one remove from the subject, which is the technique that dominated his post-67 recordings. Prior to this “Eureka!” moment, Newman had yet find his own compositional voice, although songs like I’ve Been Wrong Before (included here in its Cilla Black incarnation), Nobody Needs Your Love (as performed by Gene Pitney) and I Don’t Want To Hear It Anymore (Scott Walker) – while showing a talent still in development – are also the work of a writer already steeped in “classic” songwriting technique, brimming over with tension and invention.
The disc also collects definitive performances by Harry Nilsson (So Long Dad, featuring Randy at the piano), Van Dyke Parks’ carousel-ride arrangement of Vine Street, an aching interpretation of I Think It’s Going To Rain Today from Dusty Springfield and Beverley Martyn’s urgent take on Happy New Year, together with plenty of obscurities from Newman’s early years, many making their debut on CD. And the “lets-go-back-in-time” sequencing enables the listener to peel back the layers of Randy’s influences to reveal some sort of emotional core, concluding as it does in 1962 with the pure pop innocence of the Fleetwoods’ They Tell Me It’s Summer. Beautifully mastered and impeccably annotated, it’s an essential purchase for Newman fans and aficionados of Brill Building-era pop.
BY HARVEY WILLIAMS