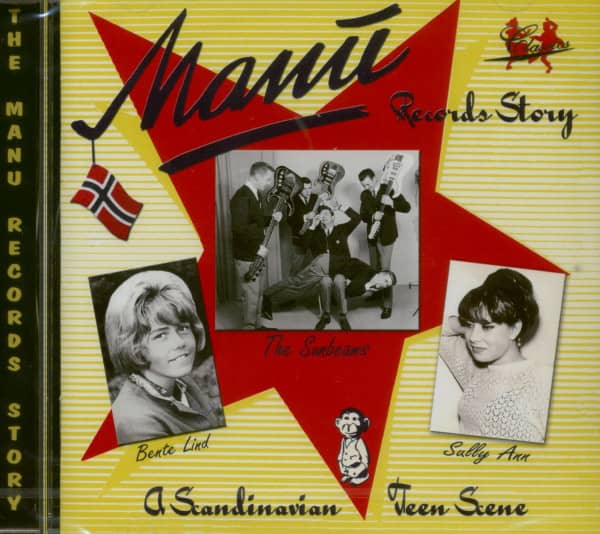 Music has always played a major role in the life of Per-Gunnar Jensen from Fredrikstad, Norway. In the early 50's he began to practise song writing and made his first recordings in 1956 along with Bjorg, his future wife and lifetime partner. To make a living P-G bought bankrupt stores and sold their merchandise as a wholesale dealer. He named his company Manufaktur. In 1960 P-G esta-blished Manu Records, with the name coming from the first letters in Manufaktur.

The office was located at Tollbugaten, Oslo and the success with Ray Adams was a great kick offfor his business. Manu had many releases in the charts and for several years it was called "the hit company" and was a real hot spot for talents. Young impresarios kept knocking on the door; spending days and even nights at the office, a situation P-G got bored with over the years. In 1968 he closed the Oslo office. This gave him more time for his family and he could focus on what he really wanted to do, write songs.

P-G has written over 700 songs and is still counting. Several have climbed the charts which has secured him a steady income over the years. P-G was contacted by the film director Nils R. Muller to help out with the soundtracks for the movies "Equilibrium" and "Broder Gabrielson': In these projects he worked with Thor G. Norris who wrote twelve of the tracks on this cd. In 1965 P-G began to represent Norway on the Rostock Festivals in Eastern Germany. It was just like a European song contest but for the countries behind the iron curtain plus Scandinavia. P-G was representing Norway for twenty-five years with artists like Wenche Myrhe, Ray Adams and Jan Hoyland.

He won several times and got numerous awards, mostly with self-penned  material. The last year of the Rostock Festival was 1989 and P-G was guest of honor in the city. Since 1980's P-G and Bjorg have been involved in a project called *ent bus" (Open house) where they help drug addicts and alcoholics in a tremendous good way, serving meals, offering showers and perhaps some clothes. This is done without any financial support from the community. They pick up food, clothes and gifts from stores, companies and also from people that want to share with the needy.

They arrange musical evenings, private parties or whatever that generates income for their business. God bless them! On Manu's sub label Emanuel P-G has released a lot of religious music in later years. Manu records closed its doors in October 2007, but Per-Gunnar Jensen involved himself in this project because he doesn't want the musicians to be forgotten as he has the greatest respect for every one of them...

Is this for sale ?

Is this record for sale , im the son of Thor G norås , and i like to know more about this , please contact me :)