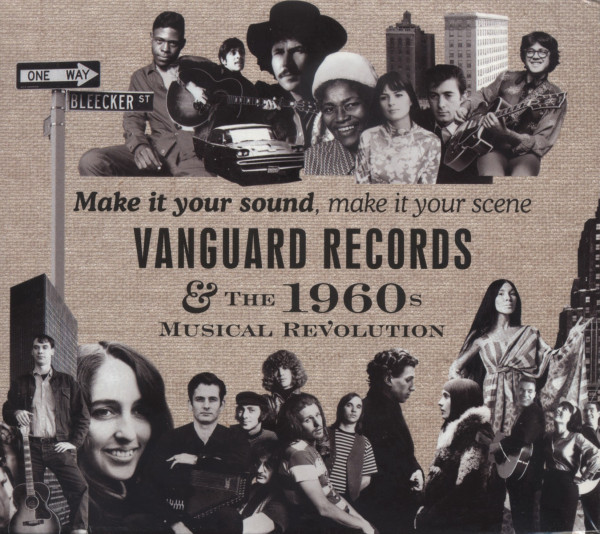 Please inform me as soon as the product is available again.
$38.67 *

(2012/ACE/Vanguard) 83 tracks - slipcase packaging with booklet.
Between the late 1950s and early 70s, Vanguard Records led the field in folk, blues and old timey music. Recordings of artists as diverse as Skip James, Bob Dylan, John Fahey and Country Joe & the Fish chronicled the emerging coffee-house and festival folk scenes and the point at which these transmuted into the psychedelic rock of the late 1960s. The Newport Folk Festival recordings brought a host of artists other than Vanguard’s own roster to an international audience.

Vanguard was one of the most influential record labels of the 1960s and early 70s. It was founded in 1950 by the Solomon Brothers – Seymour and Maynard – and began by releasing some of the very best recordings in the jazz, classical and folk fields. As the fledgling folk revival scene began to emerge in the late 1950s, Vanguard released albums by leading folk figures Joan Baez, Buffy Sainte-Marie, Richard & Mimi Farina, Ian & Sylvia, the Weavers, the Rooftop Singers, John Fahey, Odetta, Jerry Jeff Walker, Doc Watson, Hedy West, Patrick Sky and Eric Andersen; blues singers Charlie Musselwhite, Big Mama Thornton, Buddy Guy, Skip James, Mississippi John Hurt and Junior Wells; and, as the hippie era and progressive trends developed, acts such as Country Joe & the Fish, Circus Maximus, Sandy Bull, the Serpent Power and the Frost.

From the late 1950s onwards, Vanguard also recorded and released music from the annual Newport Folk Festivals. These recordings introduced audiences, not only internationally but back home in the USA, to a wide selection of musical styles not usually heard in the mainstream culture, including old timey, Appalachian ballads, electric blues and Cajun music, to name just a few. They were also among the first to introduce the festival concept to the modern musical lexicon; jazz, blues and folk festivals followed around the world from the early 1960s. Included in this box set are a selection of these ground-breaking Newport performances, sometimes by acts not signed to Vanguard, among them Bob Dylan, Pete Seeger, the Swan Silvertones, Koerner Ray & Glover, Dave Van Ronk, the Stanley Brothers, Tom Paxton and Jesse Fuller.

Comprising four CDs and 83 tracks, “Make It Your Sound, Make It Your Scene” examines how the label evolved to mirror all of these musical styles and social changes during the 1960s musical revolution. It also relates how it felt to be a British fan of the label: the initially hard-to-find imports, the later licensing deals with Top Rank and Fontana, and, finally, domestic releases on a proper Vanguard Records UK imprint.

The accompanying booklet contains many outstanding images, including album artwork, magazines covers and advertisements, sales flyers and band photos, many previously unseen or not seen for 40+ years. The main essay is preceded by an introduction by Sam Charters, the noted writer (of ‘The Country Blues’) and producer (of Country Joe & the Fish, the Frost, Lightnin’ Hopkins and the “Chicago / The Blues / Today!” series of albums). There is a previously unreleased-on-CD Bob Dylan Newport performance of ‘North Country Blues’ and a rare orchestral version of ‘Janis’ (Country Joe’s song for Janis Joplin) only available previously as the B-side of a very hard-to-find 45rpm Vanguard single.