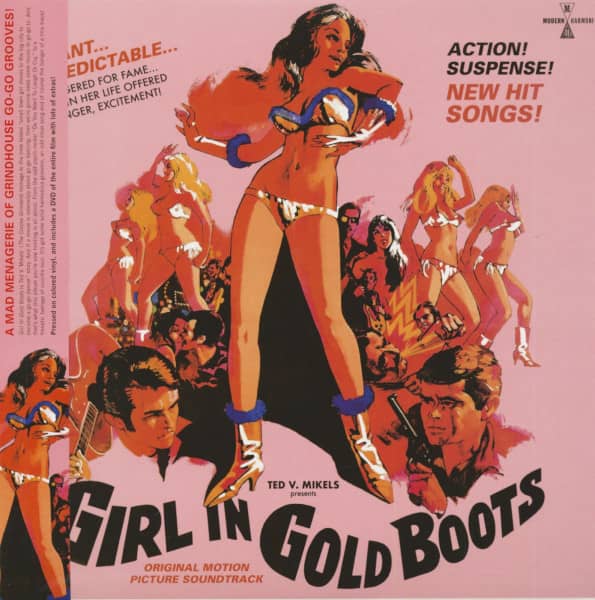 A crazy menagerie of Grindhouse Go-Go-Grooves!

Girl In Gold Boots is Ted V. Mikels' (The Corpse Grinders) homage to the time-honored story "Small town girl moves to the big city to become a go-go dancer". And if a movie is supposed to be about go-go dancing, then we need some music for go-go dancing. And that's what this album you're holding in your hands now is all about. From the strange psycho rocker "Do You Want To Laugh Or Cry" to a frenetic barrage of country soul. It's got some solid harmonica groovers, a weird Christmas song and of course the bang of a title song!

What we have is mainly country soul, a hybrid that was perfected in the late 60's by Elvis, Joe South, Jerry Reed, Bobbi Gentry, etc. Many of the songs presented here, performed by Larry Cartell, were released on the tiny label Glenolden Records, which released only seven 7" singles in '67-68. Nine of the songs featured here were on these 45s - Jerry Wallace's "That's The Fool In Me", Cartell's "Girl In Gold Boots", "Jimmy's Girl", "Wheels Of Love", "My Careless Heart", "Sin" and "Cowboy Santa" as well as Danny Welton's "Julie" and "Strobelights".

The film also features Joe Valino's fantastic popper "(Everything I Touched Turned To) Gold" from 1959, which later became a hit on the Belgian popcorn dance scene. If you combine all this with some cool Nicholas Carras Crime jazz cues, you get quite a rush. Now put on your golden boots and get ready to boogaloo. Go, baby, go! GO, BABY, GO!

Pressed on coloured vinyl and with a DVD of the whole film with many extras.