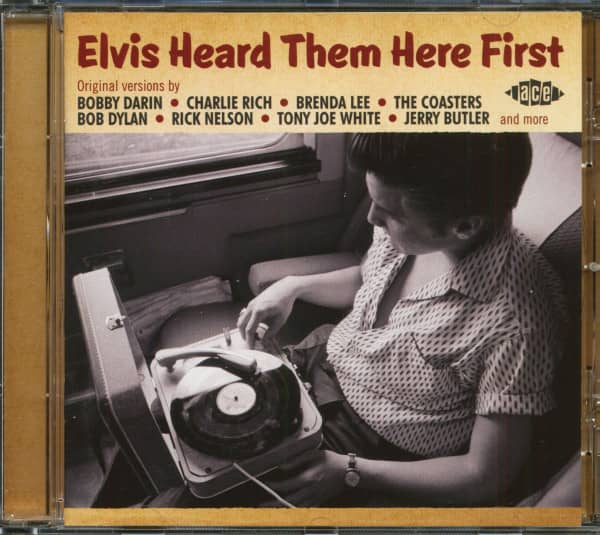 From his debut recording session to his last, Elvis Presley loved to reinterpret. The first song he ever cut, ‘My Happiness’, was one he probably learned from the 1948 recording by John and Sondra Steele. The last song, ‘He’ll Have To Go’, probably came via Jim Reeves (although Jim was not the first to record it – that honour went to one Billy Brown). In 24 years of studio and stage activity, Elvis cut over 150 songs that had been recorded previously – and put his own stamp on all of them, regardless of who sang them first. All of which makes him a guaranteed shoo-in for his own ‘special edition’ in Ace’s popular “You Heard It Here First” series.
Most people who buy Ace CDs will already know what the originals of songs such as ‘Blue Suede Shoes’, ‘One Night’, ‘Hound Dog’ and ‘Blue Moon Of Kentucky’ sound like. We could have gone the obvious route with this project and stuck to Elvis’ revivals of R&B, blues and hillbilly material, but we’ve elected to compile “Elvis Heard Them Here First” from songs he cut after his military service put his career on hold for a while. We’ve tailored our selection to embrace the originals of some of his biggest hits – ‘Always On My Mind’, ‘Girl Of My Best Friend’, ‘Guitar Man’ – and some of his most obscure B-sides and albums cuts. Believe us, they don’t come much more obscure than Duane Dee’s ‘True Love Travels On A Gravel Road’, the Bards’ ‘Goodtime Charlie’s Got The Blues’ or Roger Douglass’ ‘Never Ending’. In doing so, we hope more than a few of even the most hardcore Elvis collectors will discover some original versions of songs they may not have even suspected were ever recorded by anyone other than Elvis.
We can’t say with 100% certainty that Elvis did hear these versions first, and we’re pretty sure that, in one or two cases, he definitely didn’t. Throughout his life, Elvis grabbed music from everywhere. A voracious collector and listener, he loved nothing more than to put his own stamp on a song that he loved, particularly in the years following the ’68 Comeback Special when he was no longer bound by the constraints of what his notorious management insisted he record.
The beautiful vintage Alfred Wertheimer cover shot of the young Elvis, an inevitably jam-packed booklet featuring the usual wealth of rare labels and ephemera, and a detailed sleeve note chronicling the songs in the order he cut his versions, it’s a package no Elvis fan will want to be without, even though he doesn’t sing one note.
By Tony Rounce