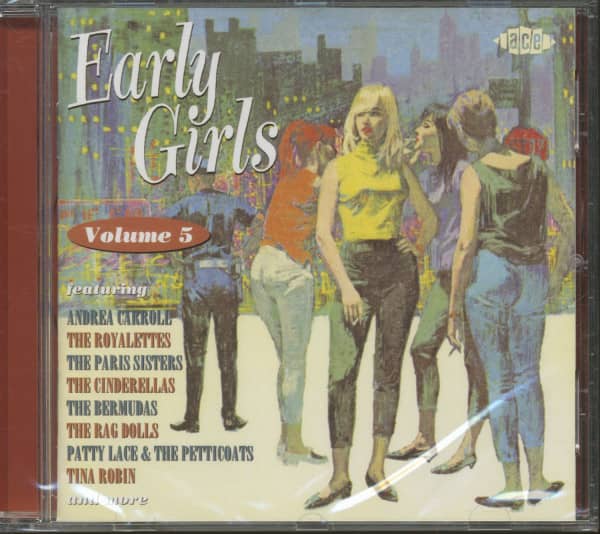 The 'Early Girls' series usually explores the girl/girl group genre through selections taken from Billboard’s Hot 100 chart in the years between 1954-1963, perceived to be the Golden Age of American Popular Music. On this volume, we have added an extra dimension by including a number of entries from Billboard’s Bubbling Under chart woven in with hit records from the Hot 100 proper, to create a very interesting snapshot of the times.

Launched in June 1959, the Bubbling Under chart comprised records nestling just outside the Top 100, tunes that were poised either to make further upward progress or fade quietly away having failed to do the business. In any event, they were usually regional hits, having made it thus far by virtue of strong airplay and sales in particular cities or states.

Trevor Churchill and I have gone to some lengths to bring you those missing links from the chart pantheon of yesteryear and 13 of the titles on Volume 5 are new to CD with three (by the Chantels, Janie Black and Patty Lace) being released in stereo for the first time. Among the many items of interest are Richie by Gloria Dennis, a regional chartmaker from ’62 written and produced by Ted Daryll and Greg Richards who penned Jay & the Americans’ first hit, She Cried, that same year, (Dear Mr DJ) Play It Again by Tina Robin, an early King-Goffin production that tickled the charts in 1961 when pop music was just beginning to look back on itself, Janie Black’s rather precocious Lonely Sixteen, and a cover version of the Shirelles’ first Scepter hit, Tonight’s The Night by the Chiffons, a record that throws up more questions than answers. These were not the He’s So Fine group, but three LA schoolkids hired to warble over an alternative take of the Shirelles backing track for a one-shot label operating from an accommodation address in a Californian suburb. The facsimile proved quite successful, making #76 on the Big Deal label. Some surmise that Scepter, a New York label, covered their own hit as a feint to discourage cover versions on the West Coast!

“Early Girls Volume 5” features fewer pre-rock mamas than on the previous two volumes and more of the glittering teen goddesses of the Brill Building era. There’s some eye grabbing cover art, fully comprehensive notes and treasure trove of rare pics, all of which make it a fitting bookend to Volume 1 in this engaging series.