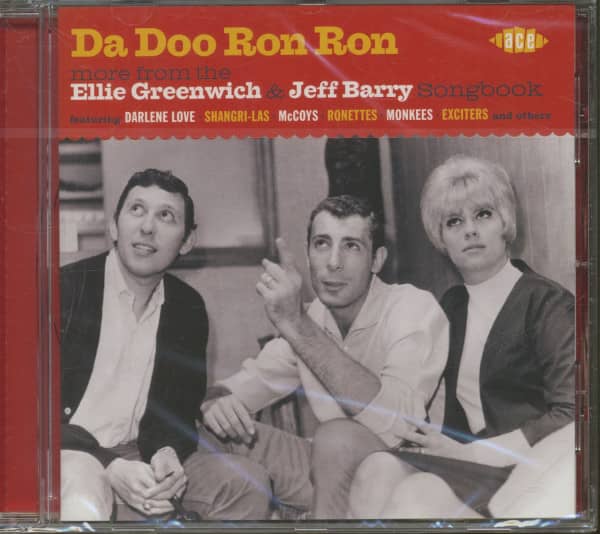 New York’s famed Brill Building housed many talented teams of songwriters whose names are immortalised in the realm of popular music. Brooklyn natives Ellie Greenwich and Jeff Barry each had budding careers as composers before they joined up in 1962, at which point the fruits of their labours became spectacular. Ace’s second collection of the couple’s output is proof that there are no words to describe their talent.
There are some beautiful confections here. The girl group phenomenon of the early 1960s was the duo’s area of expertise. Take New York’s most famous female groups of the day – the Shangri-Las, the Crystals, the Chiffons, the Jelly Beans, the Ronettes, the Dixie Cups, the Exciters (and even the elusive Butterflys); their best-remembered songs and biggest hits came from the pens of Greenwich and Barry. The Exciters’ ‘All Grown Up’, once confined to the vaults, makes the earlier Phil Spector -produced versions sound anaemic. The Chiffons track comes from their most difficult to track down album. Connie Francis released her perfect contribution to the girl group sound with the stomping ‘Don’t Ever Leave Me’ in the same year that Lesley Gore’s equally compelling ‘Look Of Love’ hit the charts. Greenwich and Barry were so good at supplying material to groups that they even recorded as one of their own, calling themselves the Raindrops. All the above-named are represented on this stuffed-to-bursting-with-pop-classics collection.
Greenwich and Barry were mainstays of the Philles label and Red Bird Records. It was no mean feat to be amongst the preferred purveyors of material to moguls such as Phil Spector, Jerry Leiber and Mike Stoller and it would be impossible to put together a collection of either label’s hits without embracing an armful of songs from the husband and wife team. After Philles and Red Bird, the duo went on to Bert Berns’ Bang Records, where Jeff Barry had a hand in a hit for the McCoys, also here.
Amongst the other male acts on this set are Jay & the Americans, the Monkees and the Tokens; the latter just happens to be the earliest known recording of a Greenwich and Barry song. And there’s a song by Manfred Mann for which an American original version has yet to be discovered. The Shangri-Las may have had the bigger chart hit with ‘Give Us Your Blessing’ but this CD includes the original version by Ray Peterson. A track each from the composers finishes off this exuberant collection.
By Eric Charge