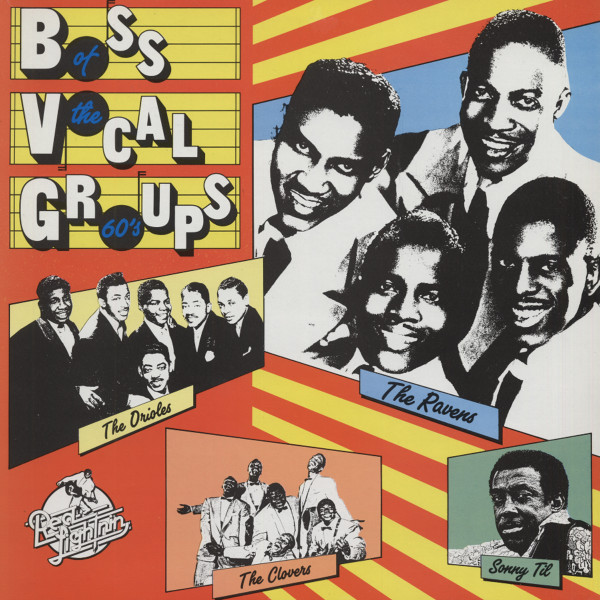 P Secure bonuspoints now
Description
Learn more about Various
Review 0
Description
It has been said “what goes around comes around” and the cyclical nature of the recording... more
Close menu

Various: Boss Groups Of The 60's

It has been said “what goes around comes around” and the cyclical nature of the recording industry does nothing to contradict this truism. But the return of three pioneering vocal groups to record for the man who started them on the road to success over a decade before had nothing to do with cycles. It has everything to do with the man, Herb Abramson, and his relationship with his artists. Another person, as adept with words as the first-quoted, said “It’s what’s in the groove that counts” and for Abramson, that’s been a way of life for over forty years.

He and The Ravens first came together in 1947, during his third year as A&,R man for National Records, following such Abramson- produced record hits for the label as Dusty Fletcher’s “Open The Door Richard” and Billy Eckstine’s “Prisoner Of Love”. Their first recording session together produced “Ol’ Man River” which sold a million copies and became a classic. It was soon followed by a string of hits including “Write Me A Letter” that put The Ravens in the top rank of recording artists. The group featured the unique deep bass lead voice of Jimmy Ricks counterpointed by the soaring high tenor of Maithe Marshall. They were the first of the ‘bird’ groups, the first to use two lead microphones on stage and the first to work out precision choreography as they stepped to the beat of their songs.

After Abramson left National, his first independent venture was Jubilee Records, in partnership with the late Jerry Blaine. When Blaine chanced upon a new vocal group from Baltimore called The Orioles, he released their first record “It’s Too Soon To Know” on his Natural label in 1948, National noticed the similarity in names and, after a mild hint, the Natural logo was dropped and the Orioles were moved to Jubilee, where their success was phenomenal. The Orioles were different from all previous vocal groups in a few important ways: before the Orioles, most black vocal groups were spin-offs of college-based quartets singing pop songs, such as the Delta Rhythm Boys, Charioteers, and Deep River Boys, close-harmony units such as the Mills Brothers and Four Vagabonds, whose blackness was carefully submerged, or the jubilee (popularized spiritual) groups such as the Golden Gate Quartet. The Ink Spots, top of the heap in the 1940’s had become little more than background humming for their star lead singer, Bill Kenny.

The Orioles brought an element of the street corner into their songs. They interpreted white material in the style of black free harmony. Their lead singer, Sonny Til, had a quality of voice that was later to be called ‘soul’ -— the ability to convey heartfelt emotion with sincerity. The languid love songs of the group were further dramatized and embellished with an ethereal ‘floating tenor’ providing wordless accompaniment an octave above the rest. Til, with this sultry good looks, provided a romantic idol for their audiences.

The Clovers from Washington, D.C. were out there singing at the same time as The Ravens and the Orioles, but didn’t get on record until 1950 when alone single on Rainbow had died in the marketplace. Enter Herb Abramson and his partner Ahmet Ertegun. Their Atlantic Label was already rolling along very nicely in 1951 . The Abramson-Ertegun production team helped the group strip away their previous Ink Spot pretensions and develop a style of their own - a pop blues approach that brought immediate success with “Don't You Know I Love You”, “One Mint Julep” and countless other hits produced by the team. John “Buddy” Bailey, lead singer of the Clovers had a somewhat rough-edged voice with a pronounced bluesy timbre that brought still another facet of ‘blackness’ to the group singing. The style of The Clovers acknowledged the tremendous changes that had been occurring in black music since the 1940’s - something people were calling rhythm and blues.

The Ravens reached the peak of their popularity in the last years of the 1940’s, just when the Orioles began their climb to the top. The Orioles had their biggest hit “Crying In The Chapel” in 1953, right when the Clovers were first starting to dominate the charts. Thus, these three groups represent a continuous and unbroken stream of musical evolution.

There came a time, as there always must, when these groups were no longer frequent visitors to the hit charts, but they continued to be vital contributors to the black music scene. As seasoned and polished professionals they continued to perform and to develop their craft. When the hits stopped coming they no longer played the biggest theatres or headlined the marathon cross-country tours of their heyday. But they never stopped singing and striving. Personnels changed as life requirements made some of the group members drop out to take ‘day jobs’, and others to drift from group to group. The rosters changed through the years, but the Ravens, led by Jimmy Ricks, the Orioles led by Sonny Til and The Clovers, led by Buddy Bailey carried on.

Herb Abramson still had faith in their talents in the early 60’s, and they had confidence in him. These recordings prove that there was still plenty of good music to come from these groups and their producer. Here, then, is a rare and enlightening stop along the road of R&,B evolution. The royalty of the black vocal groups are joined by one of their heirs, The Universals, showing how it was in vocal group harmony, after over ten years of change, a quarter-century ago.