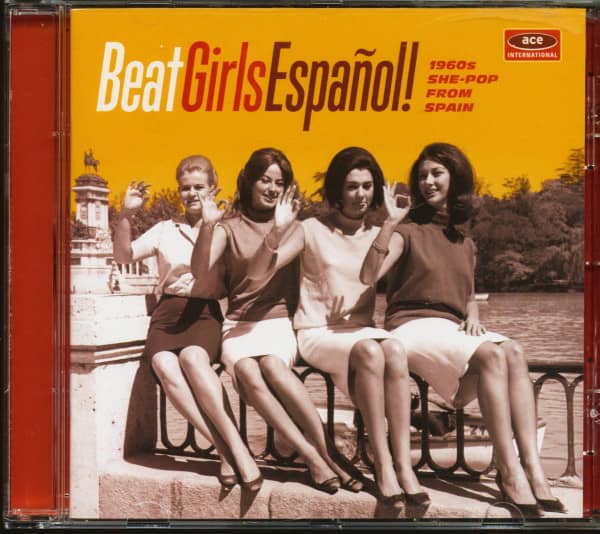 (Ace Records UK) 24 Tracks - The feminine side of Spanish pop, including some great 1960s examples of the 'Torrelaguna sound'! With a stunning 20-page booklet!

The feminine side of Spanish pop, including some great 1960s examples of the “Torrelaguna sound”.
Having already put out collections spotlighting the girl singers of 1960s Japan, France, Italy and Sweden, we now turn our attention to sunny Spain. The influence of hit records from the USA and the UK in the early 60s resulted in a musical style the French called yé-yé. Spain also adopted the term to describe this new type of beat-oriented pop, while maintaining its own musical identity via sexy rhythms and an underlying current of drama and flamenco.
The aptly named Hispavox was considered the most important Spanish record label, mainly because they had a talented team of producers, arrangers and studio musicians who between them created the “Torrelaguna sound”. Furthermore, they had Karina, who was known as the queen of Spanish yé-yé with her angelic looks and voice, and Las Chic, one of the few girl groups on the Spanish recording scene. Zafiro entered the market with a series of young female vocalists, including Adriángela and the dynamic Marisol, a child actress turned pop star who spent much of the 60s on the silver screen. The Belter label also recorded many girl singers, among them screen siren Soledad Miranda – star of several horror films – and Sonia, who recorded a feminine rendition of the Rolling Stones’ ‘Get Off Of My Cloud’. Other noteworthy artists include Rocío Dúrcal, who achieved international fame as an actress and a singer, Gelu, who rather specialised in covering Petula Clark hits, and Massiel, who differed from most of her peers by writing many of her own songs.
All of these and more are featured here in this compilation of predominantly uptempo recordings by the choicest female artists active in 1960sSpain. The collection is available in 14-track LP and 24-track CD formats. The LP version is pressed on 180g white vinyl and packaged in a heavy-duty sleeve with an inner bag featuring a 3500-word note and copious colour illustrations. The CD edition comes with a bumper 24-page booklet containing expanded notes and extra illustrations.
LINDA MORA CURTIS & MICK PATRICK