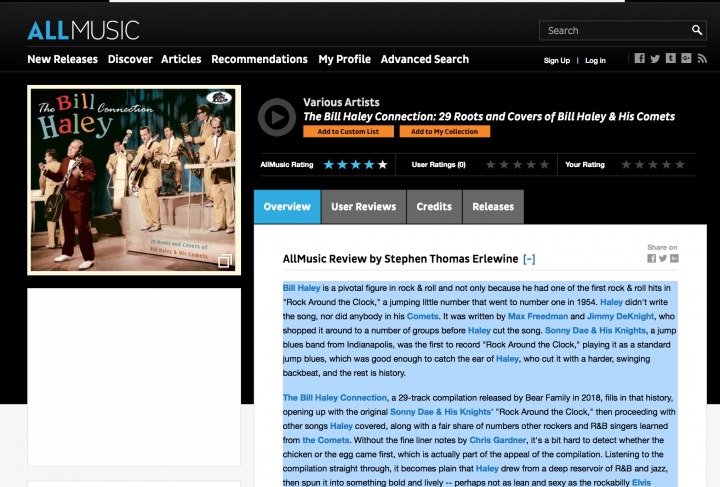 Bill Haley is a pivotal figure in rock & roll and not only because he had one of the first rock & roll hits in "Rock Around the Clock," a jumping little number that went to number one in 1954. Haley didn't write the song, nor did anybody in his Comets. It was written by Max Freedman and Jimmy DeKnight, who shopped it around to a number of groups before Haley cut the song. Sonny Dae & His Knights, a jump blues band from Indianapolis, was the first to record "Rock Around the Clock," playing it as a standard jump blues, which was good enough to catch the ear of Haley, who cut it with a harder, swinging backbeat, and the rest is history.

The Bill Haley Connection, a 29-track compilation released by Bear Family in 2018, fills in that history, opening up with the original Sonny Dae & His Knights' "Rock Around the Clock," then proceeding with other songs Haley covered, along with a fair share of numbers other rockers and R&B singers learned from the Comets. Without the fine liner notes by Chris Gardner, it's a bit hard to detect whether the chicken or the egg came first, which is actually part of the appeal of the compilation.

Listening to the compilation straight through, it becomes plain that Haley drew from a deep reservoir of R&B and jazz, then spun it into something bold and lively -- perhaps not as lean and sexy as the rockabilly Elvis Presley ushered in, but definitely something different. While it's true that some prior knowledge of Haley's catalog is required prior to having this revelation, it's also true that The Bill Haley Connection is a pleasure on its own terms: it's filled with swinging, jumping blues and R&B that feel like the first flame of rock & roll.