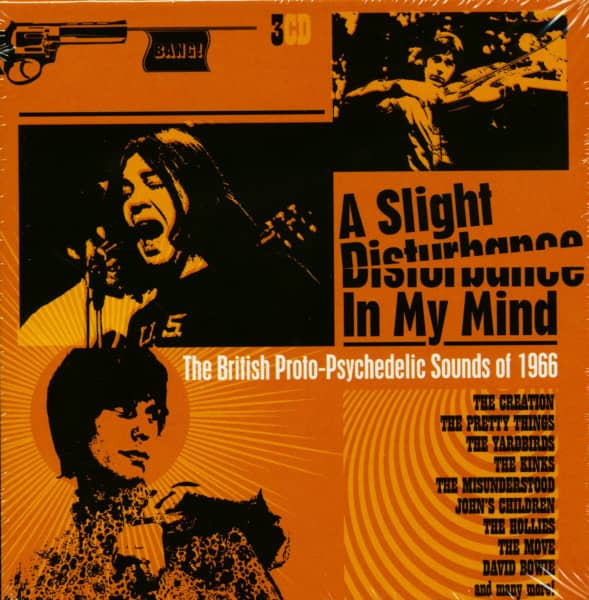 Various: A Slight Disturbance In My Mind - The British Proto-Psychedelic Sound Of 1966 (3-CD)

(Grapefruit) 84 tracks
While the likes of Rubber Soul, 'See My Friends' and 'Still I'm Sad' had served notice in 1965 of British pop's heightened level of ambition, 1966 would prove to be an even more tumultuous twelve-month period as experimentation and innovation grew to new levels. The release that August of Revolver brought the concept of psychedelic music out of the margins and into the mainstream. However, psychedelia had been percolating throughout the year. The word was already in subterranean use in America, adapted by the likes of The 13th Floor Elevators and Hollywood hustler Kim Fowley, who in late 1965 had become the first person to promote a record with the term "psychedelic". Featuring 84 tracks, A Slight Disturbance In My Mind: The British Proto-Psychedelic Sounds Of 1966 examines the experimental pop element of the British music scene during that epochal twelve-month period with a dizzying, dazzling mix of nascent psychedelia, introspective pop and what's been retrospectively labelled freakbeat. We feature vital contributions from some of the era's biggest names (The Kinks, The Yardbirds, The Hollies, The Animals etc), a bunch of highly collectable cult classics, a huge stash of unissued-at-the-time nuggets and early outings for such future legends as Bowie, Bolan, Slade and The Bee Gees. Housed in a clamshell box containing a 52-page booklet crammed with biographical information and priceless period photos and memorabilia, A Slight Disturbance In My Mind is a glorious snapshot of British pop storming the gates of a new, strange and wonderful dawn.

Article properties: Various: A Slight Disturbance In My Mind - The British Proto-Psychedelic Sound Of 1966 (3-CD)