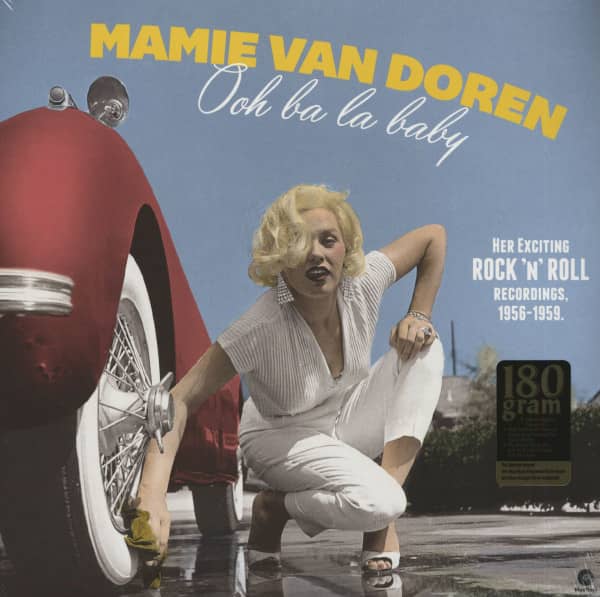 (Wax Time Records) 19 tracks
while Elvis Presley was the undisputed king of rock & roll films in the 1950s, the queen could have easily been Mamie Van Doren, the platinum-haired leading lady of several of the decade's most entertaining exploitation movies.
In that era, platinum hairdos were in, and blondes were having more fun. Hollywood was full of starlets getting the, hair bleached to try to be the next big sensation, like the actresses who inspired the trend - Marilyn Monroe, Jayne Mansfield, and Mamie Van Doren. Known as 'The Three M's,' they couldn't have been more different, but they became the era's symbols of glamor and beauty, attracting thousands of followers, admirers and copycats.
'Marilyn, Jayne and I were so different from each other', Van Doren declared in an interview in 2013. 'I was doing very young movies and Marilyn, who was ahead of me, was doing a lot of homogenized movies that weren't quite as wild as the ones I was doing. Jayne was more of a character of herself. All three of us were different, and I don't know why they would compare us. Because we had blonde hair? I don't even know. I took my acting very seriously. I did over 40 films and naturally some of them were called B-movies because the woman was of the top of the billing. Women couldn't star in their own movies.'
An American actress, model, singer, and sex-symbol, Van Doren (born Joan Lucille Olonder, in the tiny town of Rowena, South Dakota, on February 6, 1931) started her career as second female lead in a variety of different types of films, but eventually found her own niche, appearing in rebellious 'bad girl' roles, which not only gave her an identity of her own, but also often made her far too risque for the Hays office (an American organization that promulgated a moral code for films). An excellent rock & roll performer, Van Doren is best remembered for the genre's exploitation movie Untamed Youth (1957). She had a special charm, a rock & roll edge, and a unique magnetism among the pioneers of the genre's golden era.
One of the first women to star in a rock and roll picture, Von Doren appeared in some of the era's top juvenile delinquent films as a 'rebel without a cause' in a repressed society where women weren't expected to be rebellious. In her tight sweaters, short dresses and perfect bleach blonde hairdo, Mamie was sort of like o female James Dean.

WaxTime Records has dug deep in the vaults to compile 19 tracks by Mamie Van Doren, consisting of some of the fabulous and underrated recordings she made from the mid-to late 1950s. (although it's possible that a few of them were taped in the early 1960s). Eddie Cochran played guitar and wrote songs on some of Mamie's sessions for Prep Records, a Subsidiary label of the major Capitol Records (she was the first artist signed to Prep). Aside from Cochran, Les Baxter and his Orchestra also backed Van Doren here. Session highlights include 'Salamander,' 'Ooh Ba Lo Baby,' 'Go Go Calypso!' and 'Rollin' Stone,' all of which were recorded for the soundtrack of the aforementioned Warner Brothers movie Untamed Youth, which was released in the Spring of 1957. For some reason, these particular takes never made it into the actual movie. All four songs were re-recorded by Les Baxter, without Eddie Cochran, and it's the re-recorded versions of these songs which appear in the final movie print.
Other highlights consist of 'The Girl Who Invented Rock & Roll,' the rocking ''Something to Dream About,' 'Hey Mama,' 'Girls Town,' 'Nobody But You,' and the slow 'A Lifetime of Love,' among other gems and lesser-known numbers (such as 'Anything Your Heart Desires' and 'The Boy Catchers Theme').
All of these magnificent songs, which have been long unavailable on vinyl, are true snapshots of the period, when rock & roll and Mamie Van Doren were at their zenith.
Gary Blailock