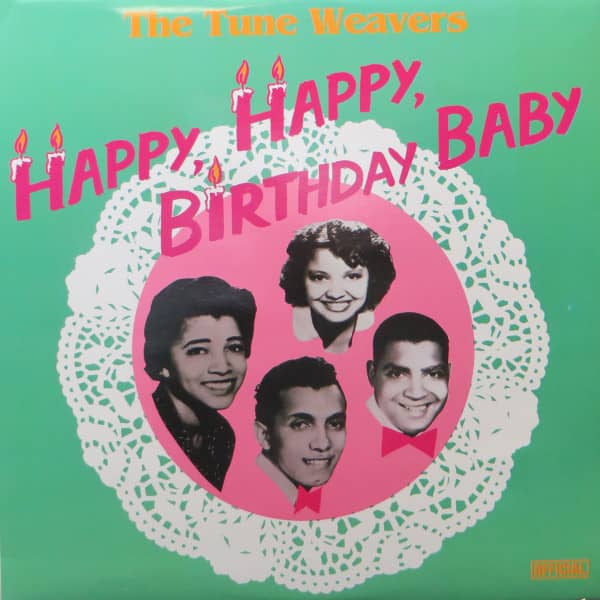 (Official) 11 tracks 1957-60 (Checker/Casa Grande) extensive liner notes.
Given the huge number of black vocal groups scrambling for their place in the sun during the late fifties it was perhaps inevi-table that many were unjustly relegated to the status of one-hit wonders. This was no reflection on their quality, just an indication of the hard and funky facts of life. And in a curious way their very anonymity often gua-ranteed them a secret place in the national psyche. Just such a group were the Tune Wea-vers, a Boston-based quartet comprising lead singer Margo Sylvia, her husband Johnny Sylvia (bass), her brother Gilbert J. Lopez (tenor), and her cousin Charlotte Davis (obligato). They had already some six months professional experience when they auditioned for producer, arranger and erstwhile bandleader Frank Paul in 1956. He was immediately taken with 'Happy Happy Birthday Baby' which Gilbert and Margot had written as long ago as 1952. With Paul in the driver's seat as produ-cer, manager and publisher they entered a local studio on the 3rd March 1957 and straightway cut the song. By July 'Happy Happy Birthday Baby' (Casa Grande 4037) was making waves in the north-east, espe-cially Philadelphia, and had attracted the attention of the big fish. Distributed natio-nally on Checker 872 the disc made number 4 R&Rwise on the 7th September and by the 23rd of the month sat at number 5 in the American Top 40. It was coupled in both cases with a surprisingly breezy rendition of Jerome Kern and Oscar Hammerstein's 'Old Man River', a hoary showtune made famous by Paul Robeson and latterly much loved by doowop groups such as the Ravens who first recorded it for National in 1947.

The fact that they revived it for Mercury in 1954 may well have recommended it to the Tune Weavers. Others who interpretted it well over the years included Frank Sinatra, in 1944 & 1963, and Sam Cooke in 1958. Fee-ling perhaps that there was still some mileage in the song the Chess brothers reis-sued it as an 'A' side with Paul Gayten's 'Tough Enough' (Checker 880) for support. In the UK the rich, full sound of 'Happy Happy Birthday Baby' was released on Lon-don American HL 8503, mysteriously cou-pled with yet another Paul Gayten opus in 'Yo Yo Walk', but alas it meant very little. Only in the greater scheme of things did it finally receive its due by slowly selling a reputed two million copies. This was across the water in the USA where 'Happy Happy Birthday Baby' was indubitably one of the key doowop sounds of 1957, sheer stairwell perfection and destined to enter the rock'n'roll lexicon. Bobby Vee cut it in 1961 and Elvis Presley trifled with the idea before that. Although he never got round to recor-ding it officially a home taping from 1958 eventually surfaced on the bogus Sun 525 during 1977.

The song certainly claimed the spotlight and soon the Tune Weavers found themsel-ves commandeered by Alan Freed for his famous rock'n'roll stage shows at the Para-mount Theatre, Brooklyn. Indeed they pla-yed all the major black venues including the Apollo in Harlem, the Royal in Baltimore, and the Howard in Washington DC. They even received exposure on prime time TV courtesy of Dick Clark. Following such sudden success was their biggest problem. Frank Paul hoped he had the answer when he proferred 'I Remember Dear' (Casa Grande 4038), an attractive bal-lad v.; iich he had penned sometime during the 1940s. Coupled with the highly provoca-tive 'Pamela Jean' it provided the Tune Weavers with their second release for 1957. This last mentioned song, credited to Paul along with Charlotte Davis and John Dic-kenson, effectively laid to rest any notion that the Tune Weavers were pure in heart. 'I make him scream Pam...... Pamela Jean !' ran the lyric with breathless intensity and for those who still cared about the music there was a fluid guitar break for post-orgas-mic reflection !

Their third release with the label 'There Stands My Love' (Casa Grande 4040), pro-vided a curious evocation of small town America and was yoked to the darkly broo-ding 'I'm Cold'. Both sides were written by Margo Sylvia on a flight west and the disc was issued in 1958. But neither this nor the exceedingly bitter 'Little Boy' (Casa Grande 101) found favour with Joe Public. The latter was composed by the ubiquitous Frank Paul with some assistance from Char-lotte Davis' replacement, one William Mor-ris Jr. In many ways 'Little Boy' was an artistic triumph for Margo Sylvia and on its coupling, the cod gospel of '(Look Down That) Lonesome Road', she was equally beguiling. For a few thrilling seconds Ms Sylvia unleashed pentecostal fire before the song was doused for mass consumption. 'The Tune Weavers' final release for the company was 'My Congratulations Baby' (Casa Grande 3038), a song conceived by Frank Paul, Chickie De Caro and Gaspar Tranito as a sequel to 'Happy Happy Birth-day Baby' and of its kind extremely convin-cing. It trickled out during 1960 with an ade-quate, if mistaken, reading of the Rodgers & Hart standard 'This Cant Be Love' tucked on the reverse. In 1961 there was a final release from the Chess conglomerate when 'Your Skies Of Blue' (Checker 1007) reached the record stores with 'Congratulations On Your Wed-ding' for a flipside. The some year saw an attempted re-recording of 'Happy Happy Birthday Baby' along with 'Hold Me', 'You've Come Back', 'Second Of Septem-ber' and an opportunist 'Happy Birthday Twist' but these remained in the Chess vaults. Since then the Tune Weavers have drop-ped from sight although their one big hit has been repeatedly anthologised by Chess, Ori-ginal Sound and the 'Cruising' series. Happy happy listening ! CLIVE ANDERSON. April 1988.