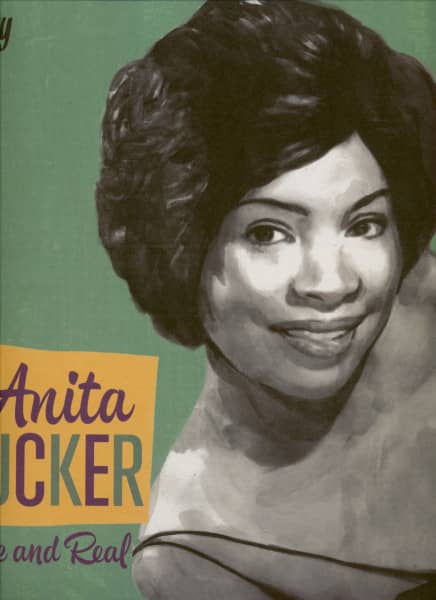 (Sleazy Records) 18 tracks
Annie Bell 'Anita' Tucker (October 20th 1930 —March 12th 2009) was born on a 600 acre farm in Arkansas. She was of African American and Cherokee descent and moved to Memphis with her family as a teenager. She came from a deeply religious family who: "...forbade me to sing the Blues...they thought they were sinful. But I wanted to sing the Blues."

By her mid-teens, she was entering many of the amateur talent contests they used to hold in black theatres at the time. In a 1964 interview with a Sydney newspaper, she claimed her favourite song was an Ivory Joe Hunter tune called 'Around Midnight' (almost certainly Blues at Midnight), with which she used to "win time atter time", often with a purse of about $25 each time but there was hell to pay at home when her parents found out! According to Anita, she got round the problem by getting married at the age of 15 and changing her name. It meant that she could pursue a career in show business under her married name without bringing disgrace to her family.

Anita's first release was in 1955 on the Philadelphia based Guyden label, an offshoot of Essex records and part of the recording family that would expand in later years to include some of the best originators of the Philly sound. There is mention of her being on the King label in a Billboard magazine of this year but no releases on King are evident. Guyden was only launched the previous year and Anita was their third release. The A side was Ring-Aling-Aling b/w A Million

Thanks (which credited Alan Freed as a writer, not because he had actually written it but in a transparent attempt to encourage him to push the disc, a more subtle kind of payola). There is a youthful quality to both of these sides and a lightness of touch in her vocals, which is absent in later recordings where she powers up. Some time that year, 'Big' Dave Cavanaugh signed her to Capitol records, he was an all-rounder: musician, arranger and producer (he had a few other strings to his bow too, such as conceiving storylines and composing music for Warner Bros. anirnations).

Anita came charging out of the starting gate in November 1955 with the classic Slow, Smooth and Easy b/w Let's Make Love. The lead side is a great R&B mid-tempo jiver with backing harmonies and instrumentation from the Howard Biggs Orchestra, including Mickey Baker and Sam 'The Man' Taylor. The backing vocals are often thought to be The Five Keys, who had also been signed to Capitol by Dave Cavanaugh. However, Bernie West of the Five Keys has since disputed this and as the songs were written by Winfield Scott and 011ie Jones (the latter formerly of The Ravens and The Blenders), it was most likely Capitol's studio Doo Wop group, The Cues, of which they were both members.

The next release in March of 1956 was from Tucker's second Capitol session, backed this time by Dave Cavanaugh's big band, Trying to Get to You b/w Shiver my Timbers (the latter was another from the pen of 011ie Jones). Trying to get to You was a cover of the 1954 hit for Doo Wop band The Eagles and also covered by Elvis. The final Capitol release in May of the same year was Handcuffed Heart b/w Hop, Skip and Jump. Despite her obvious vocal talents and looks, some decent material plus good write ups, Anita's singles didn't earn the success Capitol were looking for and so they dropped her in 1956. The two sessions also produced a couple more tracks, One and Two and If You Go, both tracks unreleased at this time, but issued on French label Pathe Marconi in 1986.

Although not recording much for the next few years, Tucker released a one-off single for the small Hollywood label 54 records in 1959, Heartaches and Tears b/w I need Love. Both sides are slightly more soulful ROB. The A side is an upbeat tune with echoes of When The Saints Go Marching In whilst the flip side is a great strolling easy groove, both sides feature some fine vocals and solid sax work.
Anita performed live as her bread and butter work and began to perform further afield. Through the 60's and 70's she was working all over the world, from Iran to Istanbul and Paris to London. She added acting to her bow with some stage and screen appearances in projects as diverse as Mississippi Burning and The Mikado. The latter stage production included Derek Griffiths and Floe//a Benjamin (now Baroness Benjamin of Beckenham and a Lifetime Peer in the House of Lords!) in the cast, who viewers of British children's TV in the 1970's and 80's will be taco/liar with.

1962 saw another single release 00 00 more obscure Hollywood label, Vended, known for a small handful of soulful cuts. He's an Evil Man b/w I'll Get Along Without You, both sides produced by Larry Johnson in house. The songs are not particularly memorable but Anita's soulful performance is easily on a par with the earthy grittiness and depth of someone like Etta James. Alas, the release failed to make any real impact but Anita continued to make a living and to travel, singing Blues, Soul and R&B, as well as her acting work.

Somewhere along that well-travelled road, she crossed paths with Gerard Akueson, a Togolese musician and record producer and founder of the first African music label, in Paris in 1962, Akue. Tucker released a couple of singles with Akue in 1966; she performed often in Paris in clubs like the Cabana Rhythm and the Parisienne and also appeared on French TV. It appears that she used Paris as a base for her work throughout parts of Europe and the world. These singles seem to be her last two recordings. firstly Lonesome Road b/w Try a Little Tenderness, followed by I Cried For You b/w You're Nobody Till Somebody Loves You. The tracks were big band Jazzy, Rhythm & Blues and Blues. Anita displays confident control of the material and there are shades of Dinah Washington in the tone and phrasing.
Listening to this body of work from Anita Tucker, one word springs to mind,underrated".

She was a singer with power, a range of colour to her voice and the ability to convey Soul, Blues and passion. Though she enjoyed a long and varied career as a singer, actress, and model, she never achieved the success of some of the other female R&B singers of the 1950's, which was maybe the material, possibly support or just plain old luck. She stayed true to the music she loved, to her the songs were: "...real blues —earthy, sometimes dirty. But even when they were dirty, they were real...Everything about them was true and real". (Aisha Khan)