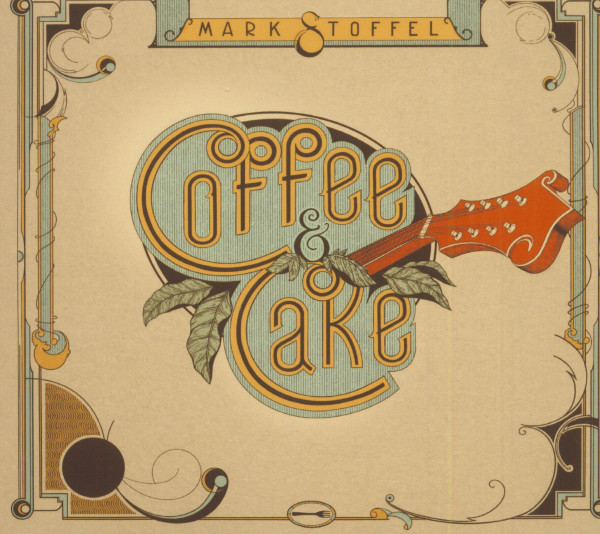 (Mountain Home) 13 tracks, digisleeve
“Coffee and Cake, Mark's second solo release is made with an array of guests that range from friends around his southern Illinois home to colleagues from around the world the all-instrumental collection is a showcase both for his graceful, sophisticated playing and his equally distinctive compositional flair” - Nashville Country Music Magazine.

Originally from Munich, Germany, Mark Stoffel spent literally decades traversing between two continents before finally settling down in Southern Illinois in 2001 with his wife Mary and his children, Finn and Oliver. Sealing his decision to make the United States his permanent home, he became a citizen in 2016.

A self-described bluegrass music “addict,” he was introduced to the music in 1979, when as a teenager, he wanted a ukulele for Christmas and was mistakenly given a mandolin instead. The flub turned into a virtue, as he parlayed a classic mandolin instructional book; occasional exposure to bluegrass through radio and concerts by touring American musicians; and accumulated experience in folk, rock and bluegrass bands into a lifelong artistic pursuit.  During this time, he began to connect with American artists, helping to arrange tour dates and providing hospitality—including to the artist who would become his future employer, Chris Jones. As he spent more time in the United States, his tasteful approach to playing, growing expertise in sound engineering and supportive harmony vocal abilities earned him increased attention — first in regional acts, then with Jones’ singer/songwriter wife, Sally Jones, and finally with Jones himself, whose Night Drivers Mark joined around the time of the band’s 2009 recording, Cloud Of Dust.

Today his tasteful mandolin performances can be heard on countless recordings, including his first solo release, One-O-Five, and a string of Chris Jones and the Night Drivers projects, including Run Away Tonight (2015), Made To Move (2017) and the most recent, The Choosing Road (2019). “Mark is one of the most musical mandolin players I’ve ever played with,” says Jones. “ Mandolin players are really impressed with his playing everywhere we go.”  Yet despite his passion for bluegrass, Stoffel confesses ironically that he is highly allergic to — yes, really — Kentucky Bluegrass.