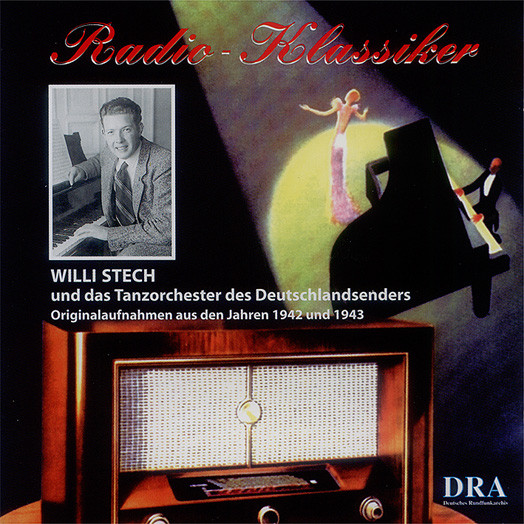 In the light of the music collected on this CD, a piece of radio history comes alive again with a history that has not yet been completely unraveled and unraveled due to its complex structure. German radio at the beginning of the 1940s, with its various empires and foreign broadcasters, had been completely reorganized at the beginning of the Second World War. Entertainment and propaganda should keep front as well as home in good spirits and distract from actual warfare. New orchestral orchestras were founded "orchestras in which almost all available top musicians of classical music and entertainment met.

Willi Stech, born on November 29, 1905 in Krefeld, was already a founding member of the legendary "Golden Seven", which was forcibly dissolved in 1939 by Minister of Propaganda Joseph Goebbels. The founding of the great Tanzorchester des Deutschlandsenders ran almost simultaneously with the formation of the Deutsches Tanz und Unterhaltungsorchester by the composers Franz Grothe and Georg Haentzschel, who also participated in the "Golden Seven" from the beginning.

All too often it happened that individual musicians and soloists oscillated back and forth between the two orchestras. Since all activities in this regard took place in the Berlin House of Broadcasting in Masurenallee, this fact is not surprising. While the "regional" Reichsender Berlin broadcast on medium wave, the "supraregional" Germany broadcaster could be heard on "Langer Welle" throughout Germany. Both the DTU under Georg Haentzschel and Franz Grothe as well as the dance orchestra of the Deutschlandsender consisted in their core of at least 12 violins, 4 violas, 4 saxophones, 3 trumpets and trombones, piano, bass and percussion and could be further increased if necessary. In the winter of the war year 1941, the dance band of the German channel under Willi Stech went on the air for the first time, a few weeks after the DTU made its official broadcast debut.

The orchestra was almost constantly in action since the end of 1941. It participated in television broadcasts and colorful afternoons. Live performances on the radio were as much a part of the day-to-day business as the pre-production of music titles as "Konserve", which was then used arbitrarily. Was mostly recorded in the "Blue Hall" of Berlin ...