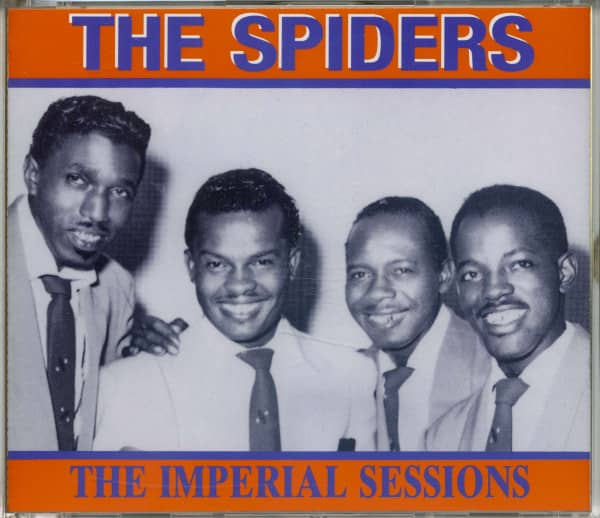 2-CD with 36-page booklet, 47 tracks. Playing time approx. 111 mns.
New Orleans wasn't best-known for vocal groups. The exception was the Spiders. Between 1953 and 1960, they recorded 46 songs for Imperial with the incredible studio bands led by Dave Bartholomew. It was Bartholomew himself who said that the Spiders' lead singer, Chuck Carbo, was the 'The best voice to come out of New Orleans in the last thirty years.' Here are the original versions of I Didn't Want To Do It, You're The One, and Witchcraft (later recorded by Elvis, Johnny 'Guitar' Watson, a.o.), and 43 other songs - many of them making their first appearance on a long-playing, compact disc.
"Bye and bye I' rn gonna sing a brand new song... The Spiders centered around two brothers--Hayward 'Chuck' Carbo (b. January 11, 1926) and Leonard 'Chick' Carbo (b. December 28, 1927)--from a family of eight children. Both were born in Houma, a town west of New Orleans. Their father was a minister, Reverend Henry Carbo, who in 1932 moved his family to the 'Zion City' area of New Orleans.
"We were the choir," says Leonard. "Mother [Anna Carbo] used to bathe us when we were little kids. If you couldn't harmonize, she put a switch on your butt and tell you to go to bed until you learn. We would sing all night."
Leonard and Chuck served separately in the Coast Guard in several famed battles of World War II. After the war Leonard formed different gospel groups in New Orleans. In 1948 Chuck joined Leonard to shout spirituals in the Zion Harmonizers, which at the time also included future Spiders Matthew 'Mac' West (b. March 8, 1926) and Oliver Howard.
In the early `50s the four, plus Joseph Maxon and the Harmonizers' pianist Henry Wicks formed the Delta Southernaires, a tight harmony group centered around Chuck, who studied voice and piano at the local Grunewald Conservatory. "We were a cool, cool group," says Leonard. "A lot of people thought we were white...Through the instructions of Henry Wicks, we had to be perfect. We' drehearsefor three or four hours." The group sang on a WWEZ radio show on Sundays in 1952 and 1953.
The Delta Southernaires recorded two songs--Bye and Bye and John the Revelator, but apparently neither the purported record (Imperial 5995) or the tapes now exist. However, Chuck Carbo did manage to preserve a two-sided acetate of Bye and Bye, revealing the group's incredible harmonies, hovering and swooping in the background and joining Chuck in a finale guaranteed to give peace of mind. The story of the Delta Southernaires 'session intertwines with the Spiders' story like a tangled web...
"I didn't want to do it, but..."
Late in 1953 Leonard was working as a furniture mover and moved the belongings of music promoter Phyllis Boone. She invited him to bring his group to Cosimo Matassa's J&M recording studio to audition.
"Actually, what they were lookin' for was a group to sing like the Orioles, the Ravens and all that," says Chuck. "We disappointed themfor the simple reason that we didn' t know any rhythm & blues numbers...So we started a hymn called 'Bye and Bye' ...When we finished the song, Cosimo said... `Could you guys put some blues to that song?'
"We told him ' no ,' because being gospel singers we didn' t want to mess with the gospel songs--switch them to the blues. He said, `If you guys can come up with something similar to that, we' 11 go ahead and record you.'
"So we got [ guitarist and songwriter] Adolph Smith. I had an old piano at my house ...When we came back with `You're the One' and Didn' t Want to Do It' they wanted us to record just those two songs. And we said `No. We record two gospel songs or we don't record nothin' "
Matthew West recalls a somewhat different attitude: "At that time we were not really what you would call `saved,' we just loved to sing the gospel. We were doin' things, you know, that Christians wouldn' t do. When they came along with the idea of rhythm & blues, that's when we switched over, because we could see the money, the dollar signs in our eyes."
With two R&B songs about to be released on Imperial Records, the group had to think of a name to disguise their identity. They couldn't agree on a name, so Chuck's wife Gloria, thinking of the shed in the backyard with arachnids crawling on it, suggested 'The Spiders.'
"It was hard for me to change ," says Chuck, "because I' d sung spirituals so long. AndI was kickin' even when the record was released...Man! I remember we were on the road. I think we were going to Amite to sing gospel songs. We heard the songs playin' on the radio. After awhile when the song got through [WWEZ disc jockey] Jack the Cat said, 'I guess you would wonder what that group is, huh? It's the Spiders and the Delta Southernaires!"Oh, my God!' I said, 'That' s the end of our gospel songs now!"'
Sadly, Chuck's prediction was correct. In fact, for the sin of singing suggestive R&B the group was kicked out of the Historic Second Baptist Church, following an admonition by their minister. Luckily, their record was a smash hit...

Learn more about SPIDERS
The Spiders The Spiders You're The One New Orleans wasn't exactly renowned for its... more
Close menu
"SPIDERS"

New Orleans wasn't exactly renowned for its overload of resident R&B vocal groups. The Crescent City seemingly preferred solo singers to front its infectious second-line rhythms. But a few good ones called the Big Easy home, none better or more commercially prosperous than The Spiders.

The Spiders revolved around brothers Hayward 'Chuck' Carbo (born January 11, 1926), second tenor and lead, and Leonard 'Chick' Carbo (born December 28, 1927), bass and lead, both born in Houma, Louisiana before their religious family moved to New Orleans in 1932. Gospel was their first love; during the late '40s, they joined The Zion Harmonizers, where they encountered baritone Matthew 'Mac' West (born March 8, 1926) and bass Oliver Howard. Along with first tenor Joe Mixon, they put together The Delta Southernaires during the early '50s, securing a weekly program on WWEZ radio.

Their big break came in late '53 when Leonard was overheard playing the piano of Phyllis Boone while moving her belongings. Boone worked for Cosimo Matassa, whose J&M Studio was the only such facility in New Orleans; everyone from Fats Domino and Smiley Lewis to Lloyd Price and Shirley & Lee cut hits there. The Southernaires auditioned for Matassa with a gospel number, Bye And Bye, but Cos asked them to change it to a blues if they had any interest in recording.

"There was a religious group that I converted to pop, the Spiders," says Matassa, who would manage the newcomers with Boone.

The Southernaires huddled with local guitarist Adolph Smith. He wrote them two gems: the luxurious You're The One and a risqué I Didn't Want To Do It. Though reluctant to enter the secular arena, the group - named The Spiders by Chuck's wife Gloria, who noticed a spider shimmying up their garage wall - cut Smith's songs at a December 11, 1953 J&M session for Lew Chudd's L.A.-based Imperial Records. Chuck fronted both tunes (a pair of spirituals were cut but shelved), backed by Cosimo's house band, including tenor saxist Lee Allen and drummer Earl Palmer.

Both sides of The Spiders' Imperial debut were smashes. I Didn't Want To Do It broke first in February of '54, shooting up to #3 on 'Billboard's' R&B 'Juke Box' and 'Best Seller' charts. You're The One followed a similar trajectory that April, stopping at #8 on the 'Best Seller' and #9 on the 'Juke Box' lists. Despite hoping to remain in the gospel field, The Southernaires were toast on that front the second local deejay Jack the Cat let it slip on the air that they were The Spiders. They wouldn't have had much time to musically praise the Lord anyway. With their two-sided hit, The Spiders were instantly the Crescent City's top R&B group.