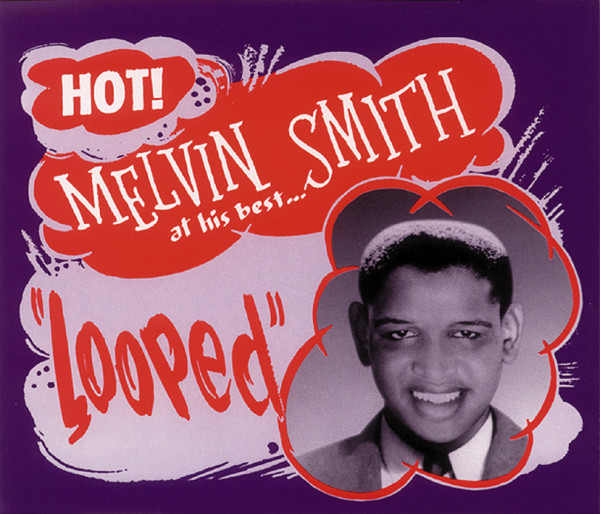 A true obscurity from the R&B era, Smith probably gained more exposure in the mid-'50s with Doc Starks & His Niteriders than on his own solo recordings from the early part of the decade. Still, as annotator Billy Vera points out, Smith recorded some fine outings for RCA as a vocalist from 1952-1954, and this double-CD set reprises all 32 of 'em, including his biggest side Looped, as well as School Boy Blues, Reliefin' Blues, Rampaging Mama, I'm Out Of My Mind, Hot Ziggity Zag, and 10 previously unreleased cuts. Plus a 16-page booklet which tells the story of one of the great neglected talents in early '50s R&B. 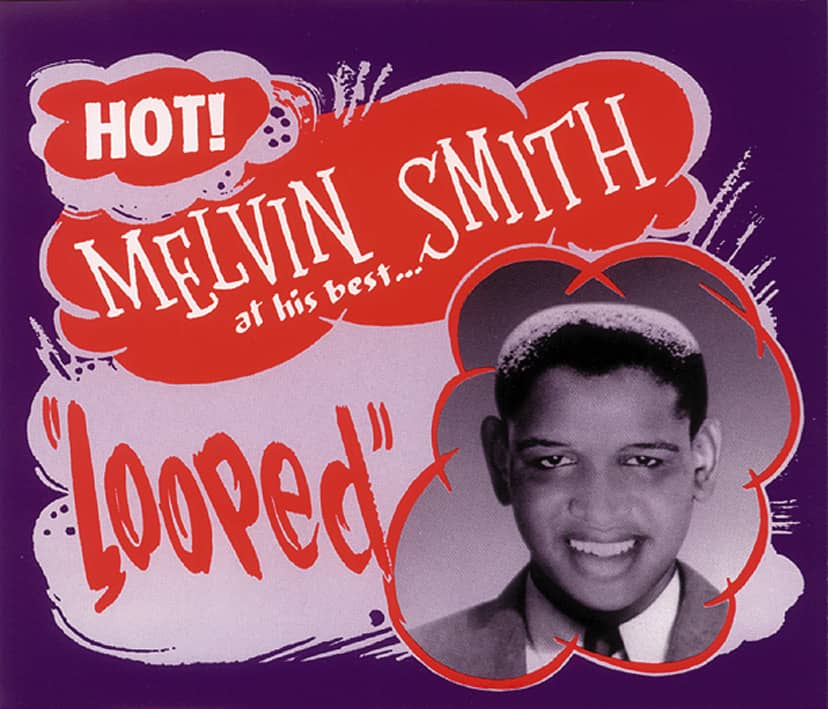 Melvin Smith was not a star. He never even made a record that charted nationally. He was not part of a famous band or group, nor even one that became famous later. He never wrote any hit songs. He never recorded a song that became a hit in any subsequent version. He did not inspire or influence the Beatles, the Rolling Stones or Elvis Presley.
There is no reason to release a two CD set of the complete work of Melvin Smith on RCA Victor but one: every recording he made for the label was at least good, and some were great.

You want to talk about unsung heros. Melvin Smith is the 'unsung-est' of them all. Yet, unlike many who did make a few, or even more than a few, hits, Melvin has had a good life. He is a decent man who has made a decent living at making music. And, when the time came, in his fifties, for him to quit, he did - with no regrets - and went on to steady employment outside of show business.
Today, he is a happy, healthy man who lives a happy, healthy life. How refreshing it is to be able to write those words, after all the whining, sycophantic stories you read about music people who claim to have been ripped off by record companies, managers, agents, club owners, unions, fellow group members, etc. I have a lot of trouble empathizing with musicians who think they were beat out of millions of dollars, when they never sold more than several thousand copies of anything.

Melvin Smith is not one of those whiners. He has one of the healthiest attitudes I have ever encountered in this business.
So, who is this guy? Well, Melvin was born in Atlanta, Georgia on March 19, 1936 to Samuel and Minnie M. Smith, the fourth in a family of four boys and four girls. Sam drove a tractor trailer in the produce business and left his family when Melvin was eight years old. From that point, Minnie worked at the Piedmont Hotel as a chambermaid.
Melvin, and his closest brother Oscar, listened to a lot of music. Favorites included Roy Brown, Wynonie Harris and Jimmy Witherspoon, whose Drinkin' Beer was a special fave.

The family lived at 381 Houston Street, in the Fourth Ward on Atlanta's East Side. It was a neighborhood overflowing with talented people. Billy Wright lived across the street, while Larry Darnell lived five doors down with his wife and child. Wright, known as the Prince of Blues, is often referred to as one of the main inspirations of Little Richard, in his use of heavy facial make-up and his high pompadour. Darnell, another flamboyant performer, had a number of hit records on the Regal Records label while in New Orleans in the band of Paul Gayten, inlcuding For You My Love and I'll Get Along Somehow.
Titus Turner, who was five years older, would come into Melvin's classroom at David T Howard High School and say that the music teacher wanted to see Mel, after which the two boys would cut class to go see girls on the West side. Turner would go on to become a successful songwriter, penning such hits as All Around The World and Sticks And Stones. He was also a singer, with somewhat less success.

Atlanta was quite a music center. Not in a league with New York, Chicago or Los Angeles, nor even Nashville or New Orleans, the city did have a thriving music scene. In the late fifties, that scene would center around the publishing empire of Bill Lowery, who would be responsible for songs like Young Love, Be Bop-A-Lula, and artists like Joe South, the Classics IV and the Atlanta Rhythm Section.
But, in the late forties and early fifties, it was rhythm & blues that was Atlanta's strong suite. The kingpin was local disc jockey Zenas Sears, who broadcast over WGST. Sears functioned as a talent scout, touting record companies on the latest and most promising entertainers in town. One of Sear's most important discoveries was Chuck Willis.
Danny Kessler, A&R man for OKeh Records from 1951-53, stated, "I was in town and Zenas told me to come over and listen to this guy sing who was painting his house. It was Chuck Willis." Willis went on to record a number
of hits on OKeh, My Story, You're Still My Baby and I Feel So Bad, and also Atlantic, It's Too Late, Betty And Dupree and C.C.Rider, which brought him fame as 'The King of the Stroll' prior to his early death. Ironically, Chuck's last coupling was What Am I Living For b/w Hang Up My Rock 'n' Roll Shoes. His hit songs for others included Close Your Eyes (The Five Keys), Oh, What A Dream (Ruth Brown, Patti Page) and Sugar Sugar (The Cadillacs).

Melvin Smith, meanwhile, had won the talent show at the 81 Theater for five weeks in a row backed by the Arstell Allen Sextet, which featured Chuck Willis's brother Pete on drums. Chuck had originally sung in the band.
Melvin was also performing Sunday afternoons at the Poinciana Club, across from the Royal Peacock, the city's biggest night club, which was owned by Q. R Jones. It was at the Poinciana that Smith really began to make connections. When Ray Charles first came to town, he was working as a single with Lowell Fulson's band.

Melvin took him downtown to buy clothes to wear on stage. Mel also recalls, "Jimmy Witherspoon used to pick me up from school in his yellow Hudson Hornet and we'd ride around all day."
In 1950, RCA Victor had had considerable success with another Atlanta artist, Piano Red, whose Rockin' With Red was a tremendous hit. Eager to see lightning strike twice, Victor A&R representative Steve Sholes returned to the scene of the hit, along with arranger Howard Biggs and songwriter Joe Thomas, both of whom also served the company in an A&R capacity.
Later in 1951, RCA Victor would . gain come to Atlanta to make the rst recordings of Little Richard, who .t that time, according to Melvin, was `a dancer and a high step female 'mpersonator. He and 1 both used to opy Billy Wright then."

This time, in January, 1951, the RCA .oys contacted saxophonist/ •andleader Clyde `Blow Top' Lynn to
set-if he had any tips on local unsigned talent. Lynn had heard Melvin around town and recommended the youngster. So, on January I I, Melvin made his first record date at WGST as vocalist with `Blow Top' Lynn & his House Rockers, vocal refrain by Melvin Smith. Also on sax was another neighborhood friend, Gilmore Carlos Bermudez, who later recorded with Floyd Dixon on Specialty.
In March, the first release, Relie fin' Blues b/w School Boy Blues, was reviewed in the trades, getting only one star — a poor showing. The competition that week was Percy Mayfield's follow-up to Please Send Me Someone To Love, Lost Love, and fellow Alantan Piano Red's follow-up, The Wrong Yo Yo.
The recordings took Melvin to Savannah, where he performed at the Riveria in a show featuring three female dancers. Melvin worked in skits as a straight man. He was expelled from school around this period. He had been working on an ice truck from 5am to noon, followed by a half day in class, then to another job as a short order cook in a drugstore.

Now free to be in show biz full time, Melvin performed with Tommy `Weepin' & Cryin' Brown's Maroon Notes, featuring Little Melvin, Daddy of the Blues. He later joined the Silas Green Show out of New Orleans.
he next 'Blow Top' Lynn session was in May, 195 I and features Rampaging Mama, one of the great all-time titles. Melvin's last Atlanta session, and his first under his own name was in January of 1952, this time with Biggs on piano to round out a band of different musicians. California Baby, while it received three stars, still sold little.

While appearing with the Silas Green Show in Miami, the local RCA Victor distributor contacted Melvin and said "They're looking for you at the headquarters." In a move that was very unusual for the times, especially with regard to R&B artists, RCA
Victor flew Melvin to New York to record Looped. This time, there was a nice contingent of Big Apple session stalwarts: Eddie Barefield, Taft Jordan, Tyree Glenn, Bill Jennings, all arranged by Biggs and overseen by Sholes and Thomas.
Looped got the full four stars, the highest rating, in the trades and began to take off regionally, even to the point of being covered by Tommy Ridgley, when Imperial's Lew Chudd heard Melvin's record and thought it could be a hit.
RCA Victor's sixteen year old almost-star was moved to New York, to a two-bedroom penthouse apartment on 45th Street, between 5th and 6th Avenues. Melvin says, `The first thing anybody from Atlanta did then was to go see homeboy Nipsy Russell. I ended up playing there at the Baby Grand with him when I had `Looped' out"
Joe Thomas hooked me up with his brother, Walter 'Foots' Thomas. ...

they ain't gonna tell it right