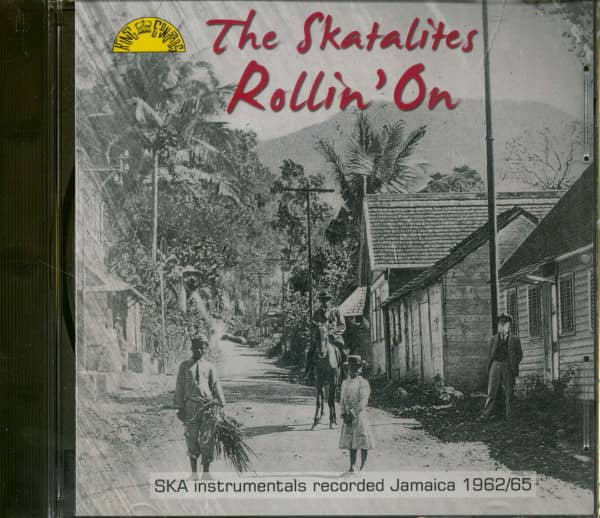 The Skatalites: Rollin' on (CD)

Learn more about The Skatalites
The Skatalites. One of the greatest groups of all time. bear a heavy legacy. Both individually... more
Close menu
"The Skatalites"

One of the greatest groups of all time. bear a heavy legacy. Both individually and collectively, they changed the shape of Jamaican music several times over. Indeed, without such highly talented. innovative musicians, it seems unlikely that Jamaica's music industry would ever really have got off the ground. Certainly, without The Skatalites the music would not have made such a strong impact on overseas listeners. who were otherwise unconnected to its country of origin. During the buoyant post-war years of the 1950s. the players who would eventually form The Skatalites. played together informally at various night clubs and outdoor venues. They were the most in-demand session musicians in ska. a distinctly Jamaican style of music. fashioned out of disparate influences. Back in those heady. early days. the nucleus of this ever-shifting group included tenor saxophonist Roland Alphonso. alto saxophonist Lester Sterling. trombonist Don Drummond. trumpeter Johnny 'Dizzy' Moore. drummer Lloyd Knibb. bassist Lloyd Brevett. rhythm guitarist 'Jab' Jerry Haines and pianist Jackie Mittoo. Although he was initially opposed to the idea and wary of the ska form in general. the gifted tenor saxophonist and arranger Tommy McCook was eventually persuaded to lead the band by Studio One's proprietor. Clement 'Sir Coxsone' Dodd. Before his untimely death from a brain aneurysm in 1998. Roland Alphonso indicated that several of the core members of the band first played together at a place known as 'Coney Island'. near the Kingston pier. where gambling was a feature as well as live music. They also played at other popular night spots. such as the Orange Bowl, 'We meet each other as teenagers: he explained. 'Knibb was living at West Street. Brevett was living with his dad and I was living in Jones Town. We were playing Coney Island six nights a week:
Like Tommy McCook and their trombonist friend. Rico Rodriguez. Alphonso was born in Cuba of mixed parentage. I was born in Havana in 1931: my mother is Jamaican and my father is Cuban. My mother took me to Clarendon. where most of my family lives in 1933. and afterwards she took me to Kingston. I went to St Aloysius school and then I went to Stony Hill school at the age of ten. My mother was poor. that's why she sent me there. My father came to Jamaica. but through he speak Spanish. nobody couldn't understand him. They lock him up in a soldier's camp and send him back to Cuba. but he didn't correspond with my mother. The year 1941. that's when I start to play music. I was too young to blow an instrument. so they put me on marching drums: He progressed to playing the trumpet while he was at Stony Hill and then learned saxophone at 13. By the start of the 1950s. he was one of Jamaica's leading jazz saxophonists. 'I was playing alto first of all. They rated Joe Harrioft number one alto sax. and I was a young player in my early 20s. They rated me number two. I was playing with Redver Cook for a start. and Eric Deans. up at Bournemouth Club.

He claims that he's going to pay me £2 for six nights a week. but everything him get. he tell me. "Boy. wait!" ' His first recording session came towards the end of the boogie period. during the mid-1950s. At the time he was a member of the Cecil Lloyd Quintet. a jazz band led by Jamaica's top pianist who was a graduate of Juilliard. 'I was working at a hotel: Cecil Lloyd lead the band. The band came in to do a session and Coxsone said. -Rolie. cut a tune for me now. man!" So I said to them boy. "Let's do a blues in C." and them call it Four Corners of the World: Lester Sterling, the group's youngest member. recorded for Coxsone from the late 1950s with Rico. Johnny Moore and fellow saxophonist 'Deadley' Headley Bennett. 'Playing for Coxsone. it was Rico carry me there: says Sterling of his debut session. 'Rico was going to look for Coxsone with this song. He told me to come along, so I meet Coxsone and he had a session the following day. It was a vocal. I think 'featuring] Lloyd Clarke.' Lloyd Knibb was born in Portland in 1931 and went to school in Kingston. He gained plenty of experience, drumming at north-coast hotels in Eric Deans' orliffestra and other groups. He also attended the Rasta cat established by Count Ossie in Wareika Hills, on le outskirts of east Kingston.

He started recording after heating the creations of local players on the radio. 'I was liking in Montego Bay. playing in different hotels, and I hear a tune over the radio and go back in Kingston and present myself. Everything was cool. playing rhythm and blues: It was Knibb's individual rimshots and drum rolls, along with Arkland 'Drumbago' Parks' rhythmic flourishes. that gave the ska beat particular demarcation. 'I changes the beat in 1964: Knibb insists. 'So that's definitely my style: He was also later noted as the first musician to try to adapt the African-derived burru rhythm. which features in Rasta music. on a full drum kit, after receiving inspiration to do so from Don Drummond.

Lloyd Brevett says he learned his style of bouncing bass accompaniment from his father, a j founded the Count Brevett Band in 1 own instruments. Lloyd also started out professionally as member of Eric Deans' orchestra. 'My dad taught me to play bass: he play in a lot of groups. At this time, I play stand-up bass: They made their debut performance as The Skatalites in 1964. at the Hi Hat club in Rae Town. then a fishing village adjoining downtown Kingston. From then on, the group was in demand all over the capital and beyond. Their subsequent residence. out of town, at a rough-and-ready beachside venue called the Bournemouth Club. where Lee Perry often
joined them on percussion and occasional vocals. is legendary for electrifying performances. This intensity was captured on their earliest studio recordings. most of which were cut for Coxsone Dodd at Studio One and many of which encapsulated the best of ska's musical possibilities. Upbeat Skatalites' numbers featuring Alphonso's fast solo-sax flourishes, seemed to reflect the optimism of the newly independent Jamaica, while raucous hits like 'Ball of Fire' and 'Guns of Navarone'. simply hold unbridled musical heat. Tommy McCook's compositions often tended to be more spacious, as did his understated solos, which typically favoured the lower notes of the scale. When McCook and Alphonso traded solos, the contrast was always invigorating. Moore and Sterling, although they were more in the background, also contribute captivating solos from time to time.

Behind it all were Brevett, Knibb. fah Jerry and the young Jackie Mittoo. keeping the rhythm in line for the neo-bebop musings of the horn section. As with ska itself, The Skatalites' music was created from a pool of disparate influences. Some of their biggest hits at Studio One were based on Latin tunes, which Coxsone asked them to adapt. 'Coxsone used to use a lot of Cuban tunes and we would write the tune in ska form,' Lloyd Knibb explains. 'We would generally get those tunes, because a staccato thing was happening in ska.' 'Mongo Santamaria did have an LP that time.' adds Lloyd Brevett. 'and all those tunes like "Prince Duke", "Pussy Cat" and "Christine Keeler" [came from the LP]: 'We play the songs as it had been played: explained Roland. 'but we arrange it and play the ska thing our style. We don't copy the solos: Jazz was always the biggest source of inspiration for the band and they duly covered songs that moved them, such as Alphonso's take on Horace Silver's 'Forest Flowers', or 'Skaravan'. his adaptation of Duke Ellington's 'Caravan'.
He spoke of his joy in sharing the stage with Count Basie's band in Nassau, and had the utmost admiration for John Coltrane. Similarly, Lester Sterling named Miles Davis, Dizzy Gillespie, Cannonball Adderley and Sonny Stitt as musicians he was thrilled to see performing. Although the bulk of their work was recorded at Studio One. The Skatalites also cut material for other leading producers of the ska years. 'We didn't sign any contracts with anyone, so we were free: Roland Alphonso clarified. 'We work with Duke Reid and King Edwards also. We did some for Prince Buster. too, but Coxsone get the most, 'cos I sign [a] contract with him: Coxsone once said he was powerless to stop Duke Reid offering better money to the band, even though they weren't supposed to record outside Studio One, according to his understanding of their contracts.

'Whatever it costs, Duke would find the money: Dodd grumbled. 'Even if I had a contracted artist. Duke would still insist and use them. Like Don Drummond and Roland was contracted to me. But after a while you realise the man is a musician and that's the only way he could really earn, so you let him play. which is different from vocalists: Despite this protestation, Dodd says he and Reid exchanged Skatalites' songs during a period of difficulty. Dodd recorded Drummond's 'Green Island'. but gave it to Reid to release, while Reid allowed Dodd to handle his recording of Drummond's 'Eastern Standard Time'. Singer Chenley Duffus also revealed that Dodd gave Reid a helping hand when he was down on his luck. 'When Duke Reid wasn't making any hit: he explains. 'Coxsone sent about a dozen of his artists, including me, on a session for Duke Reid. I did a song called "Bitter Rose", which is on the flipside of "Reload" with The Skatalites, a wicked instrumental for Duke Reid: 'Duke like to hear a certain kind of tune and Coxsone like to hear certain tunes: Lloyd Knibb continues. 'Duke would hear us sing a "banton" by Coxsone, then he would do a repeat -banton" that kind of throw word, cursing record.

We also did a lot of instrumentals for [Fop Deck records' proprietor] Justin Yap. the "Chiney Dread" down Barbican -a lot of tunes he get from Don Drummond.' Drummond was a major creative force within the group. He left school six weeks early to join Eric Deans' band and also played with Headley Bennett in tenor saxophonist Tony Brown's orchestra. His typically chilling compositions often employed uncommon minor-key arrangements, perhaps reflecting the personal anguish of a man who voluntarily checked himself into Bellevue Psychiatric Hospital on several occasions. His vision gave his music a thrilling difference, but his idiosyncratic behaviour had a volatile side. with heavy psychoactive medication probably exacerbating his drastic mood swings. On New Year's Day. 1965. Jamaica was rocked by the news that Drummond had murdered his common-law wife, a noted rumba dancer called Marguerita Mahfood. He was sent back to Bellevue. where he remained until his death in 1969. The murder was a tragic moment in Jamaica's musical history, and Drummond's detention had other repercussions: it directly contributed to the demise of The Skatalites, ultimately signalling the end of ska. The keen musicianship of The Skatalites meant the group was really overloaded with talent. It was, in some ways, the first Jamaican super-group. So it wasn't surprising that the group had difficulties sustaining itself as a unified entity after Drummond's death, especially as there had been threatened bust-ups from the band's very inception, and as the Jamaican music scene often undergoes drastic changes very rapidly. Internal rivalries, exacerbated by external pressures brought on by competing producers, saw the band split into two groups after a final performance in August 1965. 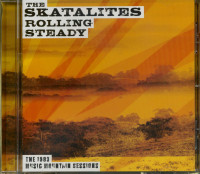