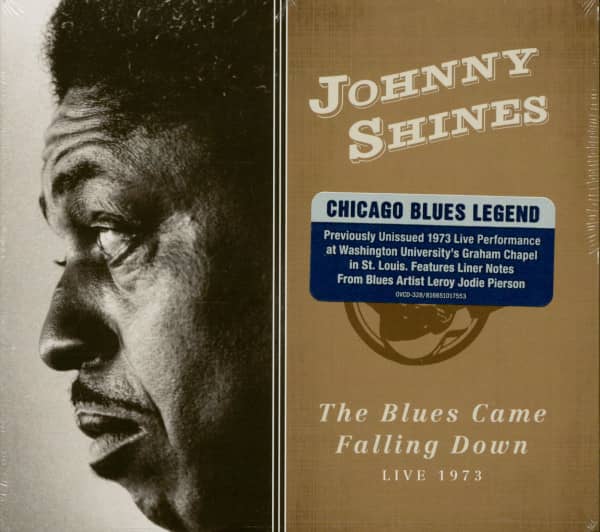 Not many musicians of the 20th century could boast of a career that included touring with Robert Johnson, recording for Columbia, Vanguard and Chess Records and playing with blues luminaries like Little Walter, Robert Lockwood, Jr., Mississippi Fred McDowell and Willie Dixon among others. Maybe there is only one, and that artist was Johnny Shines. In the 1930s Shines toured with his greatest influence, Robert Johnson, well before he made his first recordings. Those came in 1946 for Columbia and again in 1950 for Chess, but went unissued for decades. In 1952, he was back in the studio, this time for the J.O.B. label. Again, several sides went unreleased, but those that did see the light of day were commercial failures likely due to lack of any wide distribution. Shines hung it up and stepped away from music.

Thankfully, only a few years went by before he was "rediscovered" in Chicago at a Howlin' Wolf show after which there would be no more side steps away from the music business until a stroke slowed him down for a little while in 1980. He recorded a string of albums for labels such as Testament, Blue Horizon, Advent, Rounder, Biograph and Blind Pig among others, as well as, toured internationally. Shines appeared and played in the documentary The Search For Robert Johnson in 1991 just before his 1992 death. The Blues Hall of Fame wasted no time in inducting him that same year. Back in 1973 though, he was at the height of his powers as demonstrated by this largely solo performance at Washington University's Graham Chapel in St. Louis. Mixing original compositions with a few selections by Robert Johnson for a grateful and enthusiastic crowd.

The interaction between Johnny Shines' rowdy boogie guitar patterns and Big Walter Horton's spectacular amplified harmonica on Evening Sun is nothing short of stunning. Joined only by bassist Al Smith, they romp and stomp like madmen, Shines' perpetually booming voice every bit as potent as the musical backdrop. Shines was a major talent, but he never caught the breaks that some of his fellow southern transplants did on the competitive Chicago blues scene.

A product of Frayser, Tennessee (situated just outside Memphis), born April 26, 1915, Shines' childhood was spent shuttling between Memphis and rural Arkansas. He got into playing guitar in the latter, eventually falling under the sway of Howlin' Wolf in Hughes, Arkansas before returning to Memphis. Shines met future playing partner Horton during the mid-'30s and crossed paths for the first time with the immortal Robert Johnson in Helena during the same period. The two played together briefly, Johnson exerting a stylistic influence on Shines.

The guitarist arrived in Chicago in 1941, eager to make records. That involved crossing paths with Lester Melrose, and in '46 he did a session for Chicago's blues kingpin that was relegated to Columbia's vaults. His bad luck streak continued in 1950 when his Chess single Joliet Blues was killed prior to release, reportedly because Leonard Chess believed Johnny sounded too much like Muddy (the label dubiously planned to rechristen him Shoe Shine Johnny). So Shines was primed when Joe Brown showed some interest in recording him for locally based J.O.B. Records. His first session for the company in April of '52 produced Johnny's classic Rambling b/w Cool Driver. A January '53 get-together at Universal Recording spawned the blistering Evening Sun and its flip, Brutal Hearted Woman.

Shines got so discouraged about the local blues scene that he hung up his guitar for seven or eight years, finally coaxed out of retirement in late 1965 to co-star on volume three of Vanguard's 'Chicago/The Blues/Today!' LP series. Albums on Testament, Blue Horizon, Adelphi, and Advent followed, and he toured and recorded with Willie Dixon, Horton, and other hallowed veterans as the Chicago Blues All Stars. Johnny struck up a musical partnership with another Robert Johnson disciple, Robert Jr. Lockwood, for a couple of early '80s Rounder LPs, though a debilitating stroke limited his guitar playing on the second one. Shines died April 20, 1992 in Tuscaloosa, Alabama.