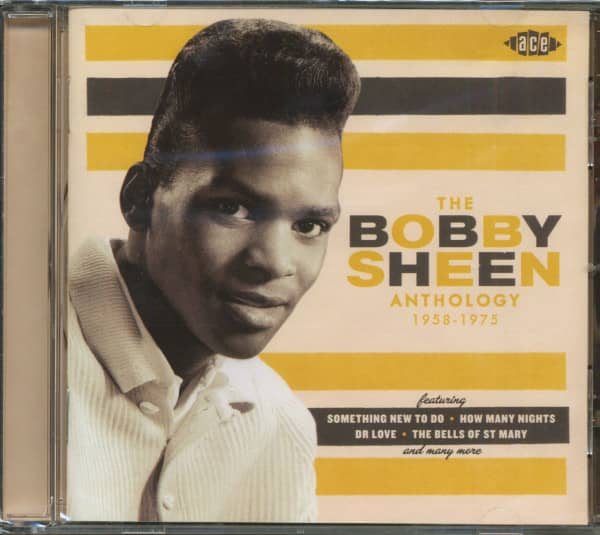 At last a Bobby Sheen anthology! Comprising recordings that stretch from Sheen’s debut lead vocal via his Phil Spector period to his final single, this sweeping collection covers a variety of styles that range from doo wop and the Wall of Sound to Northern and Southern soul.
The earliest tracks here were cut by Bobby as the lead vocalist of the Robins, the group he joined as a 16 year-old in 1958. The influence of Clyde McPhatter is very evident on these sides, especially ‘Live Wire Suzy’ (a Belgian popcorn favourite) and the group’s lively take on ‘The White Cliffs Of Dover’.
By 1962 Sheen was working with Spector, initially on a one-off 45 for Liberty Records. Sharing lead vocal duties with Darlene Love, he reached the Top 10 later that year with ‘Zip-A-Dee Doo-Dah’, released as by Bob B Soxx & the Blue Jeans on the producer’s Philles logo. He also contributed a soaring version of ‘The Bells Of St Mary’ to Spector’s classic “A Christmas Gift For You” LP.
The McPhatter influence is still evident on ‘I Want You For My Sweetheart’ and ‘My Shoes Keep Walking Back To You’, released as a one-off single on the Dimension label in 1965. A contract with Capitol resulted in a handful of singles including the Northern Soul favourite ‘Dr Love’ (released in the UK in the now very collectable Capitol Discotheque ’66 series). This compilation also boasts two previously unissued Capitol sides: ‘Baby I’ll Come Right Away’ (the wonderful Ashford/Simpson song well-know to soul fans via Mary Love’s reading) and the slow blues ‘Don’t Pass Me By’.
As the 60s came to a close, Bobby switched from his high tenor to a more contemporary lower register, cutting great tracks for Warner Bros in Muscle Shoals, Alabama with producers Clayton Ivey and Terry Woodford. His superb recordings of Philip Mitchell’s ‘Something New To Do’ (another Northern anthem) and ‘I May Not Be What You Want’ are among his best work. He sounds totally different again on ‘Don’t Make Me Do Wrong’. The Ivey/Woodford team also produced Bobby swansong single, issued on the Chelsea label in 1975.
The performances collected here are proof that Bobby was a singer who deserved a much higher profile than he achieved. Despite his great looks, obvious talent and strong music business connections, he never registered a hit record in his own name. This CD redresses the balance and proves that all Bobby lacked was good luck.
Years spent as a member of the Coasters kept him in work until his untimely death from pneumonia in November 2000. His son Charles has become the custodian of his father’s legacy and contributed the wonderful photographs that illustrate the CD’s accompanying booklet, which features an essay by Dennis Garvey built around exclusive interviews with many of Bobby’s friends and colleagues.
By Simon White