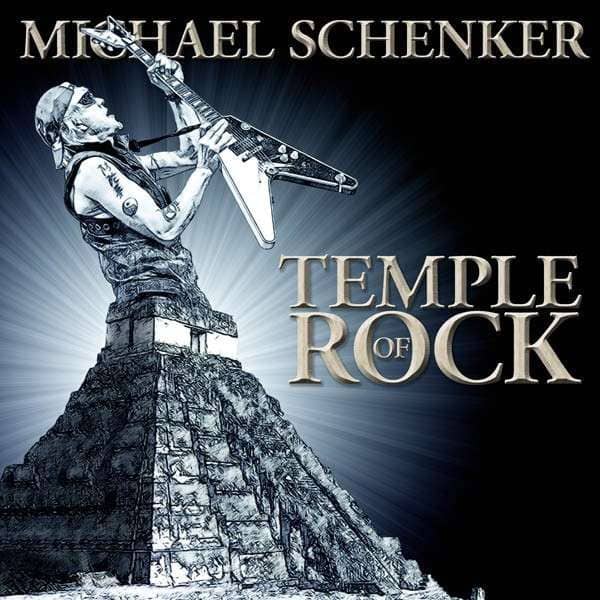 (2011/Inacoustics) 14 tracks
Michael Schenker in great form - full of power, dynamism and ideas. The basic idea of the album was for Michael Schenker to realize his idea of an "All Star Band" of Rock - a Temple Of Rock. 14 brand new titles, sometimes heavy, sometimes ballad-like - and full of dynamics. Michael Schenker...a name that still makes fans of first-class guitar hard rock smile!
After all, the list of his successes is very long. As a very young man, together with his brother Rudolf, he gave the Scorpions this very special sound, which later made the band the first real international hard rock stars from Germany. In the 70s, he also helped British rock legend U.F.O achieve their final breakthrough, who doesn't know such hits as "Rock Bottom" or "Doctor, Doctor"? Back in the Scorpions' family lap for a moment, Michael collaborated on what was perhaps their best album "Lovedrive", which featured the ballad evergreens "Holiday", "Loving You Sunday Morning" and "Always Somewhere". In 1980, the blonde guitarist finally nabelled himself and founded his first own band, the Michael Schenker Group, MSG for short.
From then on the best musicians of the world cavorted here, the founding formation included names like Gary Barden, Don Airey or Simon Phillips. Not to forget that on the first album nobody less than Roger Glover from Deep Purple was sitting at the production controls. Since then the three letters MSG are guarantors for honest, handmade and driving hard rock of the extra class. The bandleader always showed the highest creativity and courage to present his sophisticated compositions acoustically with and without a band. The career culminated last year in Tokyo, where a concert for the 30th anniversary took place in front of a sold-out house and was released by in-akustik via double CD, DVD and Blu-ray. Now, after an extensive tour, which led the band to the USA and other countries, as well as a well-deserved break, Michael Schenker is back with his group to add another mosaic piece to his work.
And this happens with so many surprises that you can't hear or see! These surprises perfectly combine Michael Schenker's past and present. The old times reflect here many companions of the guitarist of his most different epochs. Names like Pete Way, Wayne Findlay, Neil Murray or Chris Slade still stand for the highest standards and make the hearts of connoisseurs beat faster. But the collaboration of former Scorpions drummer Herman "The German" Rarebell and brother heart Rudolf on several songs should be a real treat! Michael's promise of the "Schenker Brothers" has thus been kept. Also the fact that Michael plays a flute on "Scene Of Crime" besides the guitars himself will make for some raised eyebrows. And on your heart, who would have ever thought that there could be another collaboration with Robin McAuley? "Lover's Sinfony" also makes this dream of many fans of the highly successful time as the "McAuley Schenker Group" come true. But the list is longer, Doogie White (ex-Rainbow), Super Drummer Carmine Appice or Elliott Tichy also leave their musical business cards.
However, one name will not be found in 2011, and that is Gary Barden. The new voice on the microphone is more than "just" a replacement, however, because Michael Voss showed impressively what he is capable of on the last MSG tour. The experienced producer and singer no longer needed to prove this to anyone, because his successes with Mad Max, Casanova or Silver, among others, speak volumes. In addition, his voice fits perfectly with the powerful and rousing new tracks on "Temple Of Rock". Whether straightforward, melodious hard rock like "Saturday Night" or "How Long", but also bluesy tones like on "With You" to hear...the new album distinguishes above all an immense joy of playing, variety and the participation of international superstars!
With this album MSG finally move into the "Temple Of Rock"! Michael Schenker says: "The Temple of Rock has been in me since I was introduced to the ingenious invention of the distorted guitar. For me, this is the best and most beautiful way to express myself. The rock-guitar sound I fell in love with, mostly called a lead break, I have cultivated and guarded my whole life. Through the combinations of the infinite fountain in me and the fantastic musicians around me, I have a continuous development of my artistic being. With'Temple Of Rock' I enter a new phase of my life, a new stage of existence in which I enjoy life more than ever, in which I reap the joy of my past developments.
It also seems to me that together with expressive rock musicians, we have built the external Temple of Rock in recent years and have now reached the point of covering the roof and celebrating the near completion of the temple. The generations from this time meet all over the world on one stage to celebrate, it seems, an epoch of'Hand Made Rock', which will never be like this again because of the invention of new technologies. But certainly new temples and new miracles will arise, and will express joy in new ways.
The following guests will be heard on the CD: Slash (GUNS N' ROSES, VELVET REVOLVER) - Guitar * Rudolf Schenker (SCORPIONS) - Guitar * Pete Way (UFO) - Bass * Neil Murray (BLACK SABBATH, WHITESNAKE) - Bass * Chris Glen (MSG) - Bass * Simon Phillips (TOTO, THE WHO, JUDAS PRIEST) - Drums * Carmine Appice (KING KOBRA, VANILLA FUDGE, ROD STEWART, JEFF BECK, OZZZY OSBOURNE, BLUE MURDER) - Drums * Chris Slade (AC/DC) - Drums * Don Airey (DEEP PURPLE, RAINBOW) - Keyboards * Michael Voss - Vocals * Myles Kennedy (ALTER BRIDGE, SLASH) - Vocals