Dale Rocka & the Volcanoes were formed as a band in 1998 and ever since they’ve been a flagbearer for straight rockabilly in their native island of Sicily and abroad.

The energy and elegance of their live shows have produced a solid reputation throughout Europe, and for this reason they’re constantly busy with concerts around the continent.
Despite having very broad musical tastes, it is clear that Dale Rocka & the Volcanoes get mostly inspired by the pioneers of rock, either famous or unknown.

Dale Rocka & the Volcanoes have previously recorded for Doghouse, Tail, Impero and lately Sleazy Records. All of their recordings so far came out on 45 rpm vinyl records: while their first records “You Get Alone, I’ve Got The Blues” and “You Keep My Love Handy” are long time sold out now and sought after by record colllectors, the last one, “Hot Rockin’ Baby” is getting plenty of positive reviews from music magazines and feedbacks from fans. The first release of a full album by Dale Rocka & the Volcanoes is for RHYTHM BOMB RECORDS on february 2014.

The band made his first USA appearance performing at VIVA LAS VEGAS ROCKABILLY WEEKENDER 2014.
Watch out for their live gigs when they come around your town! 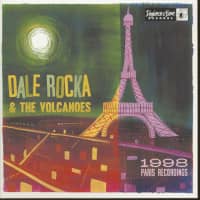