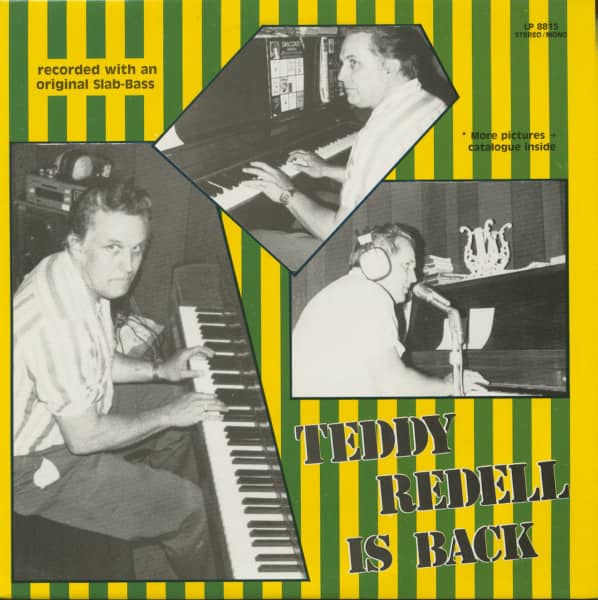 Born Teddy Delano Reidel on June 7, 1937, Teddy Redell has been based in and around Quitman, Arkansas for most of his life. His grandfather, he says, came from Vienna, and his father was a strawberry farmer. Teddy was the only child. His influences were the great western swing pianists, like Moon Mullican (then with Cliff Bruner) and Bob Wills' longtime pianist, Al Stricklin. Teddy learned to play piano from his grade school teacher, Annie Witt, who taught him boogie woogie and ragtime. By his teens, Teddy was writing songs. In 1952, he performed Steel Guitar Rag on KWCB's talent show in Searcy, Arkansas. A local bandleader, Lloyd Southerland, asked Teddy to join him for their weekly radio program on KWCB and showdates.

Loys Southerland (Lloyd's daughter, perhaps) was married to yet another local artist, Wayne Raney, and in the winter of 1954/5, Raney brought Teddy to Missouri to appear with him on KRCG-TV in Jefferson City. In May 1955, Teddy followed Wayne to the Wheeling, West Virginia Jamboree (Wayne's last King session was held around this time and Teddy reckons he was on it). Later that year, they moved on to WSLB in Baltimore, Maryland, and then briefly to XERF in Del Rio, Texas.

Teddy returned to Arkansas, and toured with Tommy Trent in 1956. In 1957, he auditioned at Sun, but nothing came of it. Over in Trumann, Arkansas, two former gospel singers, Arlen and Jackie Vaden, launched Vaden Records in 1959, and asked Teddy to work sessions for them. The singer on one session came down with laryngitis, and Teddy was given the studio time. He recorded five singles for Vaden, the third of which was Judy. By Teddy's account, Judy was recorded at KLCN, Blytheville, after it went off the air for the night. Larry Mullen played bass, Fred Douglas played guitar, and fiddle player C. W. 'Kinky' King played drums.

The single created sufficient buzz for Atlantic to buy the master and the publishing around March 1960. It didn't chart, but one copy ended up in the hands of Elvis Presley, who recorded it in March 1961. Teddy was drafted into the U.S. armed services in 1960, and served his hitch at Fort Bliss, Texas. He returned to Arkansas in 1962 and began touring under his own name, but grew tired of the road and settled in Benton, Arkansas, to learn piano tuning. He continued songwriting with Sonny James' Marson Music, and had several songs recorded. In 1964, he and his bride, Rose, settled in Rose Bud, Arkansas, where he established his own piano service.

When the Europeans came calling, he went overseas, but piano tuning has been his business for forty years. That and going to the mailbox to pick up the cheques for Judy.