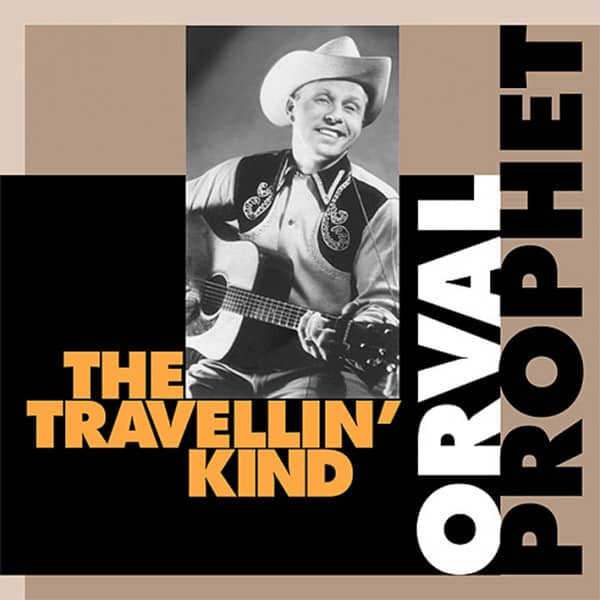 1-CD with 12-page booklet, 22 tracks. Playing time approx. 57 mns.
They called him 'The Canadian Ploughboy' and that's precisely what he was. In fact, his unwillingness to leave the family farm in eastern Ontario, Canada adversely affected his chances of making it in the highly competitive world of early Fifties country music. There's no doubt that Prophet Orval had the talent. He was signed to Decca, Nashville in 1951 and recorded several singles for the label including one that became a big Canadian hit, Judgement Day Express. The sound was modelled closely on Hank Snow, but Prophet Orval made the records uniquely his own.
In 1957, Prophet Orval returned to Nashville to record two sessions as Johnny Six. His recording of Mademoiselle also became a big Canadian hit, and a local hit in the USA, but once again Prophet Orval retreated back to eastern Ontario to become a local legend ... and nothing more. This set gathers all of Prophet Orval's 1950s recordings. The sound on the early songs is tight, rocking Fifties country very much in the Hank Snow tradition. The Johnny Six recordings are more countrypolitan, but still definitely country. You might not have heard of him before, so be prepared for how good he is!

Learn more about Orval Prophet
Orval Prophet was a legend. A legend in a relatively small community perhaps, but a legend... more
Close menu
"Orval Prophet" 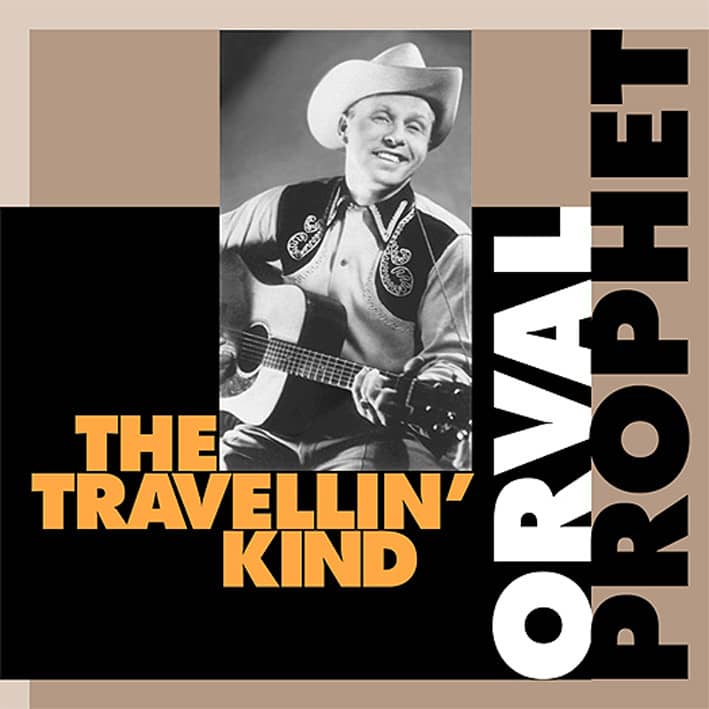 Orval Prophet was a legend. A legend in a relatively small community perhaps, but a legend nonetheless. It's true that these recordings, in common with many of Orval's recordings, were made in Nashville, but Orval never truly left Canada's Ottawa Valley. The Valley has always had its own country music scene in which acts like the Happy Wanderers, the Family Brown, Mac Beattie, Bob King, and Orval Prophet could make a living while remaining more or less invisible to the world at large. One or two Ottawa Valley acts made a small splash in the United States, but Orval Prophet was the one who might have had a sustained career in country music's mainstream. A mixture of bad luck and bad health, and a distinct lack of the grim determination that fueled his Canadian counterpart Hank Snow kept him close to home.

Orval Rex Prophet was born in the tiny community of Edwards, Ontario, twelve miles south of the nation's capital, Ottawa. His birthdate, sometimes cited as August 31, 1923, was actually one year earlier. His parents, Bill and Alice, ran a 200-acre mixed farm. Bill did carpentry on the side. They had six children who lived, and another who died. Alice was a formally trained musician, who played organ at church. Orval worked on the farm, but his avocation was music. “I learned guitar by myself," he said. “I didn't know how to tune it, but I had an ear, so that I knew when it was in tune. I didn't have the money to travel back and forth to Ottawa, so I learned at home. I went to Ottawa once a year with 50 cents to go to the Exhibition. That was it." His first public appearance was with his sister, Helen. “She played piano and I played guitar," Orval said later. “We played all night for four bucks, then drove home ten miles in the horse and cutter, and froze. Then, during the War, I'd walk the twenty-two, twenty-four mile round trip to the Civic Hospital in Ottawa, and sing for the veterans."

Music was no more than a sidebar to farm work for several years. Orval remembered, “I used to be ploughing the fields and working with the four horses, discing and harrowing, and I'd leave the words to a song at one end of the field and I'd try and memorize them. If I was lost, then when I'd made the round I'd take a look." His first break came when he was invited to join a group called Fiddlers Fling on CFRA, Ottawa. The host and washboard player was Frank Jones, who went on to become assistant to Columbia Nashville's legendary producer, Don Law, before heading up the country divisions of Capitol, Warner Bros., and Mercury Records. “We formed a live country group for Saturday night radio,"  said Jones, "and we became so popular that we toured the Ottawa Valley. The leader of the group, a fiddle player called Billy Shepherd suggested that I listen to Orval. He thought Orval would be a great addition. What we heard, we liked."

Orval was the second cousin of Ronnie Prophet. Born in Calumet, Quebec, sixteen years after Orval, Ronnie went on to become a minor star in the United States, and currently works the Branson theaters. He visited Orval during the early Forties when Orval was still working on the farm. “I used to go to their farm, spend a week every summer,"  says Ronnie. “I'd listen to Orval sing. We were haying, harvesting potatoes." In later years, they roomed together briefly in Montreal when Orval worked at the Monterey Club, but their careers rarely bisected. Ronnie always chased success south of the border; Orval did not.

At some point in 1949, Wilf Carter heard Orval playing with Bill Shepherd and invited him to work a tour of the Ottawa Valley. Carter, then with RCA, offered to take a demo tape to Decca's country A&R chief, Paul Cohen. “Paul said, 'Get the heck out of my office, I haven't got time to listen to Hank Snow,'" recalled Carter. “I said, 'He may sound like Hank Snow, but his name is Orval Prophet.' He said, 'Carter, get out of this office.' I said, 'I'm telling you the truth. That's not Hank Snow.'" Cohen took another listen and decided to audition Orval Prophet. “I was harrowing out in the field," said Orval, "and I'd just come to the end of a row, and my mother was yelling at me, 'Long distance for you. New York.' My God, you never saw a guy drop lines so quick. I was out of breath, and Wilf was on the phone. He said, 'I got you a contract.'"

Orval saved for nearly a year to get the money necessary to make it to Nashville. It was minus 30 degrees one January day in 1952 when he left Ottawa en route for Wilf Carter's home in Clinton, New Jersey. "I knew a state trooper and I asked him to take Orval to Trenton and put him on a train to Nashville," remembered Carter. "Orval was late and this guy really gave him a ride, but we got him on the train." Orval hid the money he'd saved in his shoes, and hunkered down for the long ride. He auditioned for Paul Cohen who figured that he could use someone who unaffectedly sounded like Hank Snow. They cut the first session on January 16, 1952, and another the following day.

Cohen reinforced the connection to Hank Snow by placing Orval with an instrumental line-up rooted in Snow's breezy acoustic style, accented by the dulcet tones of the lap steel. It's probably Grady Martin taking the Snow-like acoustic guitar solos. The distinctive rolling 'r's' in words like "heart" marked Orval as clearly Canadian. Shortly before he signed with Decca, he'd met a young would-be songwriter and musician, Ken MacRae, from Glengarry County, near Cornwall, Ontario. "I was living in Ottawa," said MacRae, "and I was working outside music, and writing songs as the spirit moved me. I wrote 'The Judgement Day Express' because train songs were in vogue, but I didn't write it with Orval in mind." As was often the case, Orval took half the composer credit, and Paul Cohen took the music publishing. The Judgement Day Express and Chuck Murphy's I'm Going To Birmingham were the star turns from the first day's session. Orval, like Snow, cruised at the brisk tempo, and seemed very assured for someone making his first recording a long way from home.

The second day's session included Molly Darlin', a turn-of-the-century Will S. Hay song that Eddy Arnold had made into a hit in 1948. The other side of the record was Arthur Q. Smith's Tears On Her Bridal Bouquet. Smith was the Knoxville-area drunk who had written songs like If Teardrops Were Pennies, Wedding Bells, and Rainbow At Midnight then promptly sold them. In retrospect, Tears On Her Bridal Bouquet was one that he should have sold. Hank Snow's reaction to Orval's records is unknown. Later, after Orval had refined his own style, he recorded a tribute to Snow (written by another Ottawa Valley legend, Hank LaRiviere aka Hank Rivers), The Travellin' Snow Man.

The Judgement Day Express became a minor hit in the United States, and a big seller in Canada. “I was getting royalties," remembered Orval. “I was offered anywhere I wanted to go, the Big 'D' in Dallas, the Louisiana Hayride in Shreveport, but I was in love with a girl in Ottawa, and she said, 'If you go, I won't be here when you come back.' And I thought there was only one girl in the world." There were other problems, too. "I never had good health," he said. “I guess I had a heart condition from when I was a kid." The combination of poor health and a natural unadventurousness combined to keep Orval Prophet close to home.