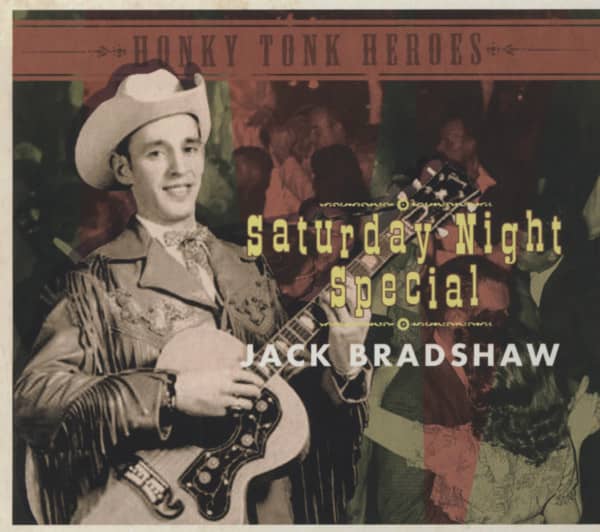 Twenty-two songs from one of Fifties country music's underground legends!

The first complete CD reissue of Jack Bradshaw's country and rockabilly recordings! All 22 hillbilly, country and rockabilly sides he recorded between 1954 and 1959.
Contains all 16 tracks issued by Mar-Vel and Glenn Records in the '50s, plus 6 songs not originally issued from Mar-Vel!
Includes original versions of songs that became hits for Carl Smith (Don't Tease Me) and Kitty Wells (Searching)!
The 40-page booklet by Martin Hawkins contains the first ever complete overview of the career of this sadly neglected artist and includes many previously-unseen family photographs!

Jack Bradshaw was among the small-time radio and bar-room singers who had a few records on a minor label - and just one shot at the big-time. Jack's came in 1955 when he penned a song that Carl Smith took into the country charts and another that Kitty Wells turned into a big hit, giving him the chance to record for Decca in Nashville. It was a promising break, but it didn't pan out. Jack started recording in Indiana when the country business was looking for the next Hank Williams and he continued through the years when everyone wanted the next Elvis Presley. But Jack Bradshaw remained his own man. He had a smooth, expressive vocal style, drawing in the listener with deceptively-simple rhythms and well-crafted lyrics. Songs like 'Don't Tease Me', 'Searching' and 'Saturday Night Special' have long appealed to hard core hillbilly music fans. 'Jo-Jo' and 'Naughty Girls' have been rockabilly collectibles for years. Even bluegrass fans will be glad they checked out Jack Bradshaw, too! This is one of Bear Family's uncovered treasures! 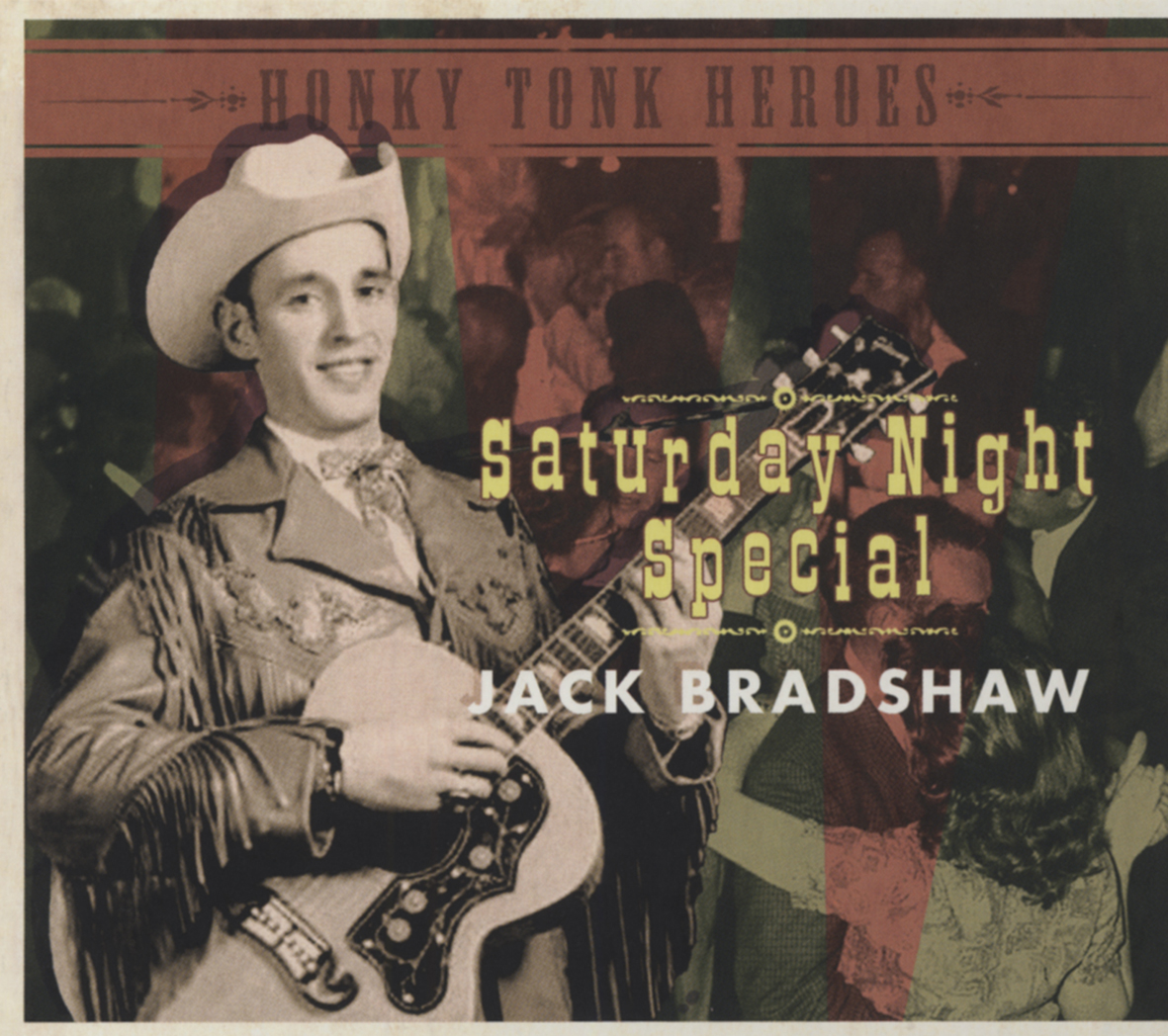 Jack Bradshaw was one of many local entertainers of the 1940s, '50s and '60s whose career involved a lot of taverns and honky-tonks, a lot of late nights and travelling, a lot of juggling music with the day job and family life, some small-town radio work, a few records on a minor label - and just that one shot at the big-time. Jack's shot came in 1954 and 1955 when he penned a song that Carl Smith took into the country charts and another that Kitty Wells turned into a big hit, giving him the chance to record for Decca in Nashville. Circumstances and other people's business priorities worked against the Decca deal paying off and you can guess the rest of the story.

Or can you? Jack Bradshaw has had no ordinary career, no ordinary life. He had an incredibly hard childhood, some good breaks and some bad ones, a good family life and another life in the bar-rooms, a life surrounded by drinkers and teasing women, and then a religious conversion taking him from the barstool to the cross.

His recording career spanned just seven years or so, starting out when the country business was looking for the next Hank Williams, continuing through the period when everyone wanted the next Elvis Presley, and ending after the smoother Nashville Sound took hold. Through all that, Jack Bradshaw remained his own man. He had a sound that skimmed along and a smooth yet expressive vocal style, drawing the listener in with deceptively-simple rhythms and lyrics that on closer examination revealed a high level of musicianship and song-craft. Songs like Don't Tease Me, Searching and Saturday Night Special appeal to hard core hillbilly music fans, Jo-Jo and Naughty Girls to rockabilly fans, and there are elements for bluegrass and folk music fans to admire too.

This CD brings together all 16 tracks that were issued as 45s by Mar-Vel, Decca and Glenn Records in the period between 1954 and 1960, together with 6 tracks recorded for Mar-Vel or Decca that were unissued at the time. That's 22 fascinating songs and performances from a little-known but under-rated singer and songwriter.

Today, Jack lives in La Porte, Indiana where he still plays music at local venues at the age of 81. Nowadays it's strictly gospel music, but he'll happily talk about that other Jack Bradshaw who frequented the bars and sang 'heart songs' to and about those 'naughty girls'. He talks in a clear, precise voice echoing that smooth, rhythmic, folksy singing voice from the old 45 rpm discs made over half a century ago. He talks with an enthusiasm that reflects the effort and hard work he put into his singing career years ago. He looks forward as much as back. He sounds youthful and he likes to joke about his age. He'll often refer to some event that took place decades ago or some activity that took forty years to perfect – and then mischievously add, "which is strange, because I'm only 39 years old."

Although he has lived in Indiana for sixty years now, Jack Bradshaw was originally from Kentucky and was raised in Tennessee. He was born on 29 March 1930, the third of the four children born in an eight-year period to Kendrid David (Dave) Bradshaw originally from Coal Creek, Tennessee, and Louise Bradshaw, formerly Louisa Phillips, also born in Tennessee. They were married on 26 December 1923 in Pineville Kentucky. Kendrid had been married before and described himself as a farmer at the time he completed the Army's draft registration form in May 1917 in Worth County Missouri. By 1930, when that year's national census recorded eight month old Jack Edward Bradshaw, the family was living in Scuddy Coal Camp near Mason's Creek, Perry County, Kentucky and thirty-six year old K D was working as a weighman in the coal mines. Louisa was then twenty-four. Jack told researcher Steve Kelemen: "I don't remember much about Kentucky except I was in a coal mining town. When I was four years old my mother passed away and approximately one year later my dad passed away. So I and my three sisters were separated and raised by family members in the northeast part of Tennessee." Louisa had died of heart failure in 1934 while trying to give birth and soon after KD died of "industrial tuberculosis" linked to the coal mining industry. 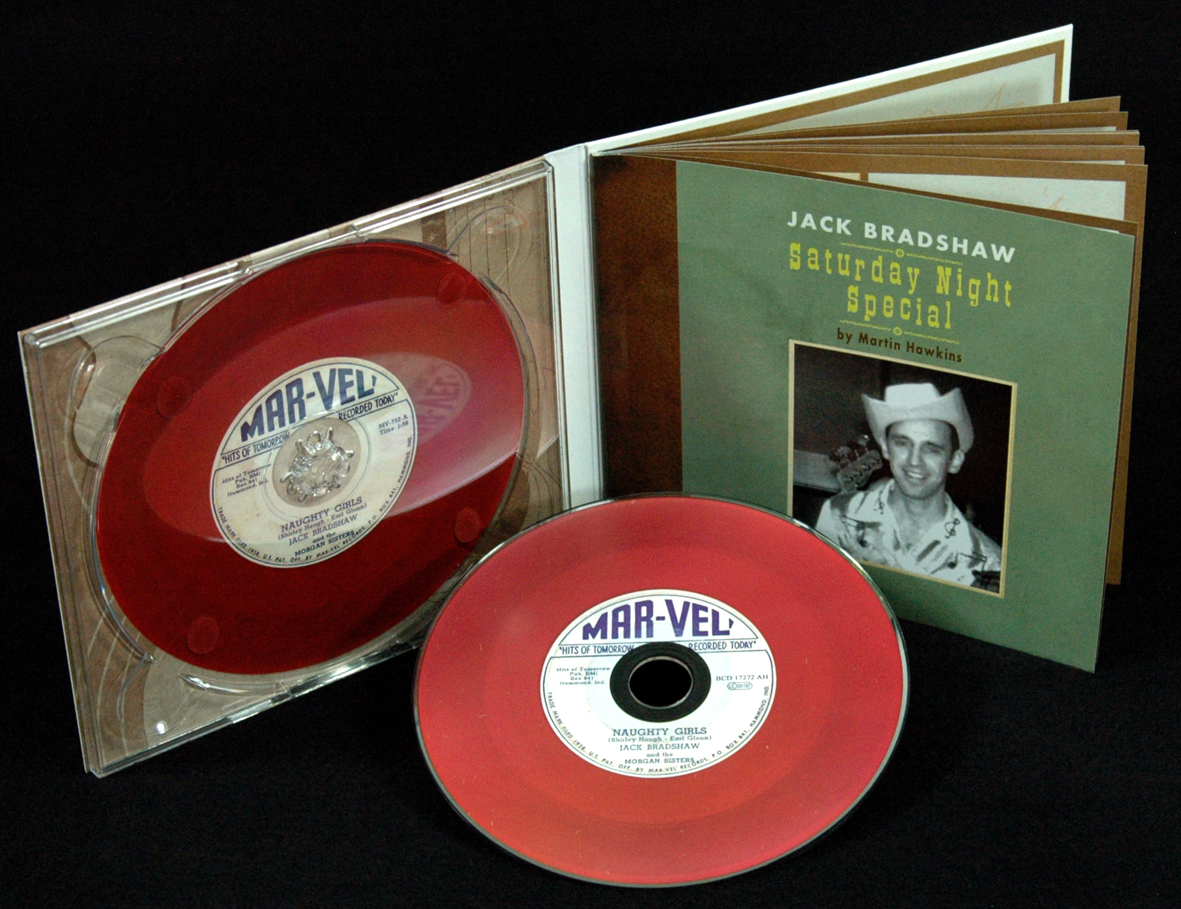 Jack told me "My three sisters, Thelma, Shirley and Margie were raised like me by friends and relatives. In my case I lived with my uncle on my mother's side, Luther Phillips, and his wife, Nerva. We lived in Laurel Grove and then in Oliver Springs, Tennessee." Luther and Minerva were themselves just 20 years old when Jack was born and they were living in a logging camp near Anderson, Tennessee that year. By the time Jack was growing up with them they had moved a few miles to Laurel Grove in the shadow of Oak Ridge and some thirty long miles from Knoxville.

Life was tough enough in Depression-era Tennessee without the problems Jack Bradshaw faced. His daughter, Kim Siebe told me: "Life was really hard for him moving from family to family until they found someone to take him. Dad used to tell me stories about just taking an onion and a piece of bread to school for lunch and not having shoes. His sister used to bring him a toothbrush to use as he didn't have one – but he still has beautiful white teeth to this day"!

For Jack, as for many people growing up in the 1930s and '40s, one of the main means of escape from school and work and daily life was radio and the barn dance and folk music programmes they brought into the home. Jack remembered: "I was always interested in music and I started playing guitar when I was just a youngster. I used to hear folk and hillbilly music on the radio out of Knoxville. There was a show on WNOX called the 'Mid-Day Merry Go Round'. I would listen to that and the people that influenced me to want to play were some of the old timers on that show. Carl Story was popular there, and there was the Carlisle Brothers, Bill and Cliff, people like that. I soon had a burning desire to play music." Carl Story was one of the pioneers of bluegrass music and had worked with Bill Monroe and others before he joined the 'Merry Go Round' in 1945 when Jack was fifteen. Jack had probably learned to play a little before then. He told Steve Kelemen: "When I was a young lad there was a man named Frank Tucker who taught me a few chords on the guitar. I am not sure but I believe he worked for a saw-mill at that time. I don't recall how or where I got my first guitar but I'm sure it was a cheap instrument because there was very little money available at the time. Anyway, Frank Tucker was the man who was responsible for teaching me."

Once he was proficient enough on guitar in a society where home-made entertainment was the norm, Jack started playing at churches, local picnics, and other free events. He teamed up with another young boy, Johnny Duncan, born in Oliver Springs in September 1932 and two years Jack's junior. With other friends Jack and Johnny learned the skills of playing solo and as part of a group, and they hatched plans to make a new life.

Johnny Duncan told interviewers years later that his family had been in that area of the Tennessee and Kentucky border for 150 years since arriving from Scotland but that life was hard in the coal mining towns. He recalled listening to the radio, especially the WSM 'Opry,' and singing at Baptist dinner-on-the-ground camp meetings, but his first thoughts then were of ways to escape. He said he rode a boxcar to Michigan with his brother at the age of nine before being sent home by a railroad patroller. He was more than ready to go again when Jack Bradshaw mentioned Texas to him.

"As soon as I could get out," Jack told me, "I got into music touring with road-shows and the like." He recalled how by the age of 18 he "was working in Oak Ridge, Tennessee for a company called Hamilton Roofing and starting to play music whenever I could for local events there. Then the company relocated to Lubbock, Texas and I decided to take up the chance to go out there with the company. I went to Texas with another boy, Johnny Duncan, who came from Tennessee with me. Duncan was a little younger than I was but he came anyway."...

This is still a worthwhile album, so thanks again to Bear Family for it's attention.
Country Music People 3/2013 Roland Purdy

As always there is the usual impeccable Bear Family booklet - 40 pages of facts about Jack Bradshaw.
Maverick 3-4/2013 Alan Cackett