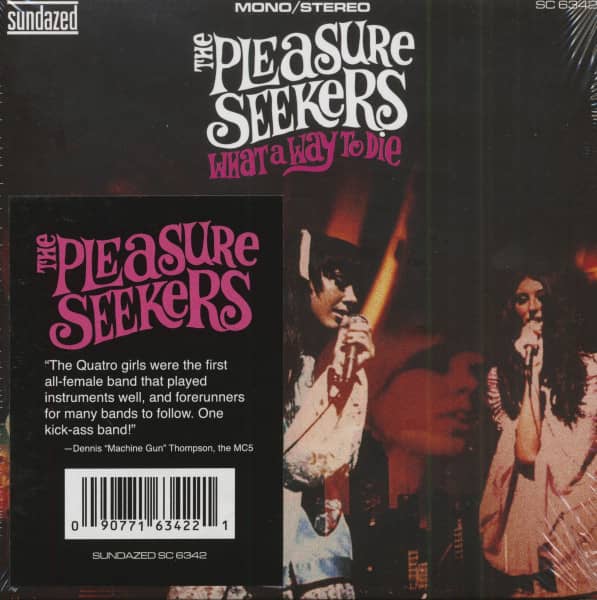 The Pleasure Seekers: What A Way To Die (CD)

(Sundazed) 12 tracks, digisleeve
Recorded between 1965 and 1968! Female Kick-Ass Garage stuff! Also available on vinyl.
The archetype for the '60s-era girl group was etched indelibly into stone, like a commandment: three pretty girls with matching outfits and bouffant hairdos would sing, with musical backing supplied by a bunch of guys standing in the shadows. The Quatro sisters shattered that archetype forever with the Pleasure Seekers, an all-girl teenage rock & roll group who played all the instruments themselves and were fully capable of wiping the stage with any male band that crossed their path.

The Quatro girls had been brought up in a musically-minded family, nurtured with classical piano and vocal lessons. As Patti recalls, "By 1964, I had been taking guitar lessons, hanging with musicians in the local music scene. We had seen a Beatles concert, and I was quite dazed and focused at the event, watching the audience cry and scream out of control. It was my epiphany moment, and I was determined to start an all-girl band." Shortly thereafter, the first lineup of the Pleasure Seekers fell into place with Patti Quatro (lead guitar), Marylou Ball (rhythm guitar), Suzi Quatro (bass), Diane Baker (keyboards), Nan Ball (drums) and vocal duties shared by all.

Around the fall of 1965 the girls dared local teen club manager Dave Leone to give them a slot at his popular Hideout Club, claiming they were better than most of the other live bands there. "You're on," responded Leone, "in two weeks. Three songs!" The Pleasure Seekers were soon a popular feature at the club, honing their skills alongside the likes of the Rationals, the Amboy Dukes and Bob Seger & the Last Heard. "In the beginning, there was a lot of skepticism," remembers Patti, "especially the first night.

The boys crowded the stage, the girlfriends pulled them away with laughter, as if 'Girls playing?! Yeah, right!' It was always satisfying to see them be silenced quickly when we began playing. We grew used to seeing slack jaws open in surprise." Next they were asked by Leone to record and release a single on his Hideout label. That March 1966 release is now regarded as the greatest "girl garage" single of the era: "Never Thought You'd Leave Me" b/w "What a Way to Die." "Dave brought lyrics, and we put the songs together quickly," remembers Patti. "We felt very legit in making this record at a small local studio. Nan was the sexy voice on 'Never Thought You'd Leave Me,' and there was lots of laughter as Marylou added the screams on 'What a Way to Die.'" Suzi Quatro remembers the recording as "very important and memorable." The Pleasure Seekers were soon in demand in the region, playing teen clubs, parties, colleges and local TV shows. After a series of lineup changes, the band brought in older Quatro sister Arlene (keyboards) and Darline Arnone (drums), the first female drummer sponsored by Slingerland Drums. A short time later, Pami Benford joined-up on guitar and bass (that lineup lasting through most of 1968). It was a very versatile group, remembers Patti, with Pami and Suzi sharing bass, and Pami and I sharing lead and rhythm guitars.

The gender bias was my hot button, recalls Arlene, along with confidence in our musical abilities. With women musicians dismissed as a novelty, I delighted in watching the audience go from skepticism/ridicule, to shock/cheers. For Suzi, though, this period was where she learned her craft: I considered myself a musician, and didnt really think about gender too much. Two tracks recorded in 1967, but unissued at the time, Elevator Express and Gotta Get Away, highlight the bands growing musical maturity since their Hideout debut. Detroit was the best learning ground in the world for musicians, recalls Suzi, with an amazing energy and creativity that is in every successful artist that has come out of the city. We were actually one of the earliest Detroit bands traveling the country, adds Patti. Everyone wanted this unusual allgirl band who rocked an entire Motown revue (changing instruments and singers throughout) and an entire Sgt. Pepper/Magical Mystery Tour revue, as well as covering English bands, acid rock and everything in between. Signing up with Associated Booking Corporation, the group began making the transition from local to national act.

Producer Dick Corby caught the Pleasure Seekers at Trude Hellers in New Yorks Greenwich Village and signed them to a Mercury Records deal in early 1968. To keep rein on their finances in NYC, Patti recalls, We booked Arthurs nightclub for a month, staying at the infamous rock Gorham Hotel, recording by dayplaying by night. Also in residence were the Who, the Blues Magoos and an assortment of other bands. Hitting NYC as young teens, it was exciting, scary, funall emotions churning, she continues. We felt we had hit the big time, going from the tiny local Hideout session to the huge Mercury professional studio facility, complete with session people adding strings and other elements. A single pairing Good Kind of Hurt and Light of Love was released in April 1968, while a third song, Locked in Your Love, remained in the can. The group then headed out to the Northwest for a lengthy tour. The Northwest tour was awesome, remembers Patti. We were billed with Canned Heat, Boyce & Hart and Merilee Rush, and were held over six weeks to tour with Eric Burdon and the Animals. The Mercury single was out, momentum was surging. Both sides of the single were getting airplay, but ultimately it failed to gain any traction. Really neither song reflected our own sound, admits Patti. We rearranged Light of Love for live performance, feeling disconnected to the record, yet realizing we had to play ball with the executives to keep us rolling. Ultimately Mercurys vision for the Pleasure Seekers clashed rather sharply with the bands vision. The suits wanted tits and ass, recalls Darline, wowing Vegas crowds, playing tinkly tunes in lavish costumes. In that male-dominated music era, we were strictly a novelty, and a high risk endeavor, adds Patti. The record executives felt women musicians would fall in love or get pregnant so were not worth investing the time and money. We had to kick down many doors. We were serious musicians, and in it for the right reasons. In the end, we were not happy with a forced direction that Mercury Records had in mind, and ended up leaving the label to rock our music in our own fashion.

After a memorable 1968 Far East tour, playing for wounded returning American soldiers from Vietnam, the Pleasure Seekers (with new drummer Nancy Rogers) returned to a Detroit that was now, in Pattis words, exploding with heavier sounds. That sparked us to change direction with new ideas we had been exploring. Arlene left the band and we brought in our youngest sister Nancy (vocals). With Suzis Joplinesque vocals combined with Nancys wailing female Robert Plant style, we enjoyed a harder edged, double-punch effect. The last four songs on the album, "White Pig Blues," "Brain Confusion," "Where Have You Gone?" and the atmospheric psychedelic mover "Mr. Power," all date from this 1968-69 period when the Pleasure Seekers were playing the Grande Ballroom alongside the MC5, Alice Cooper, the Stooges, the Amboy Dukes and SRC. With this change in musical direction and the departure of Arlene and Pami, the band forged on as Cradle. Suzi Quatro departed for England in 1971, launching a successful solo career. Patti and Nancy continued with Cradle until 1973 when Patti joined another pioneering female rock group, Fanny.

The Pleasure Seekers reunited recently in April 2012 (minus Suzi) for a well-received show in their hometown, where they were inducted into Detroits Hall of Fame. I think all of us Quatro girls are extremely proud of our pioneering days reflects Patti. In a renaissance-era of music, we kicked down doors for women to rock heavy. There were key times in our lives of making decisions that may have turned us towards larger fame, but less happinessdepending on your philosophy of such things. The Pleasure Seekers could have been a Las Vegas show act bringing in buckets of money or on Motown, turned very formulaic girlie-soul. But we stayed true to our goals, and I dont think any of us have any regrets of staying our course and playing the music that moved us. It's all been a thrilling ride with great memories.
--Mike & Anja Stax Ugly Things magazine

Article properties: The Pleasure Seekers: What A Way To Die (CD) 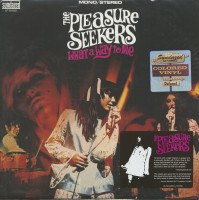