Aged only 57. in October 1992 singer/pianist Lennie Peters of the Seventies' hit duo Peters & Lee, sadly died following the failure of an intensive course of chemotherapy to alleviate his debilitating condition. It was the final tragic blow for a gentleman who'd battled for most of his life against the odds which would surely have defeated less determined characters. One of four young children whose father died, leaving mother to raise her brood alone in London's Caledonia Road area, Lennie's involvement in a car accident when only five robbed him of sight in his left eye. Eleven years later the brick hurled by one member of a gang of hooligans in Peters' direction made contact with the right side of his face, plunging him into total darkness.

Like many other boys from that generally poor northern district of the capital which embraced Pentonville Prison as a centrepiece, Lennie's ambition had been to become a successful boxer, and to reap the rewards that would bring help to his surviving parent who went out to work daily to maintain her family. That dream irrevocably shattered, he was forced to attend a local school for the blind. While it offered valuable training to assist with day-to-day living, it could not bring Lennie around to the idea that he'd not "make to the top" of any profession. Exactly what or who inspired his choice is unknown, but the teenager decided he'd learn to play the piano and, in typical warm-hearted fashion of such a close community, the neighbourhood market barrowboys clubbed together to purchase the necessary instrument, fully aware that Lennie's mother couldn't hope to afford one.

In time Peters did indeed find his way around the "Eighty-Eights", earning a living singing and playing hits of the day to London's public house patrons. In the early Sixties he became part of a jazz group, The Migil Four, but by the time they'd taken over The Dave Clark Five's residency at the Tottenham Royal, and danced into Britain's Top 10 with a blues beat version of MOCKING BIRD HILL, Lennie and his trademark black sunglasses had departed. He'd been plugging away at the same familiar circuit for a decade when, in 1971, he chanced to meet Diane Lee, the attractive blonde daughter of a Yorkshire miner. Their voices harmonised in a pleasing manner, and as Peters & Lee, they began entertaining the public as a duo.

After two years the pair tried for the big time, entering Hughie Green's long-running television talent show, OPPORTUNITY KNOCKS. Their impact was immediate: for six weeks they fended off all competition and were signed by Philips Records who had them cut the warm-hearted number which audiences clearly enjoyed, WELCOME HOME. Entering Britain's Hit Parade on May 26th '73 it
glided towards No.1 and made it for a week in July, being initially blocked by Slade's SKWEEZE ME, PLEEZE ME, and then deposed by another Glam-Rock act, Gdry Glitter, with, I'M THE LEADER OF THE GANG (I AM). In the event though it spent longer on the chart than its rivals combined, lodging for a fabulous 24 weeks to their 22. Several other countries also welcomed WELCOME onto their hot vinyl sales indexes. With a follow up, BY YOUR SIDE (39), dropping in across Britain for a month from November 3rd, at year's end Lennie and Dianne were able to note withzpride their achievement as 10th Best-Selling Group in the singles category.

WELCOME HOME ran in as 3rd individual top-retailer behind two other decidedly Middle-Of -The-Road (M.O.R) offerings, Dawn's TIE A YELLOW RIBBON ROUND THE OLD OAK TREE and the Simon Park Orchestra's EYE LEVEL, theme from the T.V. series VAN DER VALK. Peters and Lee's album premiere, entitled WE CAN MAKE IT, from which we've drawn no less than six of our selections, LET IT BE ME, GOOD MORNIN' FREEDOM, I'M CONFESSIN', CRYIN' IN THE RAIN, NEVER MY LOVE and WELCOME HOME itself, offered a beautifully balanced menu of favourites old and new. The perfect blueprint of all that was to come, this dozen-tracker knocked on the door of the United Kingdom's top 50 on June 30th '73 and would still be entrenched a year later. It remained 55 weeks, hit the top and became the season's 4th Best-Seller here. Lennie and Dianne rose to 9th in the LP sales category overall assisted by a second set, BY YOUR SIDE (No.9, 48 weeks), just slipping into the tabulations following chart arrival on 22nd December. From it we've borrowed ALL I EVER NEED IS YOU, NEVERTHELESS, THE OLD FASHIONED WAY, UNTIL IT'S TIME FOR YOU TO GO, UNITED WE STAND, RAINING IN MY HEART and IF, plus, of course, its title cut.

They'd become one of the hottest properties in showbiz with a diary suddenly filled to overflowing but, already committed to a summer season paying a fraction of the fee they could now command, made no attempt to extricate themselves and capitalise on their newly found fame, instead happily fulfiling the lengthy engagement for which they'd been grateful before Dame Good Fortune cast her spell at last. While holidaymakers applauded, the twosome were responsible for daily disc sales estimated at 85,000.
There was a brace of healthy singles in 1974, DON'T STAY AWAY TOO LONG (No. 3, 15 Weeks) and RAINBOW (17, 7), both from P. and L's third twelve-incher, also called Rainbow.

Entering the picture on the 21st September, it loitered 27 weeks for a high of 6, and we have included two hits plus SEND IN THE CLOWNS and SEASONS IN THE SUN. The former was then a new Stephen Sondheim outpouring from his latest Broadway spectacle, A LITTLE NIGHT MUSIC; the latter recently a global pop smash for Canada's Terry Jacks with words and music by Jacques Brel and Rod Mckuen. Hit 45s were conspicuous by their absence during '75, but an LP, aptly registered as FAVOURITES, maintained their profile from October 4th, reaching No.2 during its 32 week run and contributing Charles Fox and Norman Gimbel's glorious KILLING ME SOFTLY WITH HIS SONG to this collection.

Their final significant single, 1976's HEY MR. MUSIC MAN, completes our retrospective, but Lennie and Dianne continued in tandem until 1980 when the lady opted for an acting alternative on the boards. They'd earned a dozen Gold and one Platinum Disc in less than seven years. For the next six summers Lennie continued cabaret and recording work, but was at last able to savour more of a family life with his wife Sylvia and children Lisa and Stephen at their Enfield, Middlesex home. Then in 1986 Dianne and Lennie teamed once more and returned to the clubs and holiday camps from which they'd sprung, always assured of a definite WELCOME HOME. Wheels had been set in motion for a 21st anniversary album to celebrate their on-stage partnership, but shortly after taping began Lennie's illness was diagnosed and the smiles of friends turned to tears. This collection recalls a happier era, when the names of Lennie Peters and Dianne Lee were on everyone's lips, while their sweet music flowed endlessly from our radio and hi-fi loudspeakers. Let's relive those golden memories once more.
John Tracy London 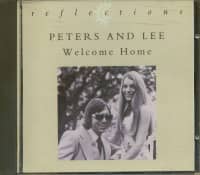 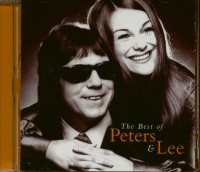