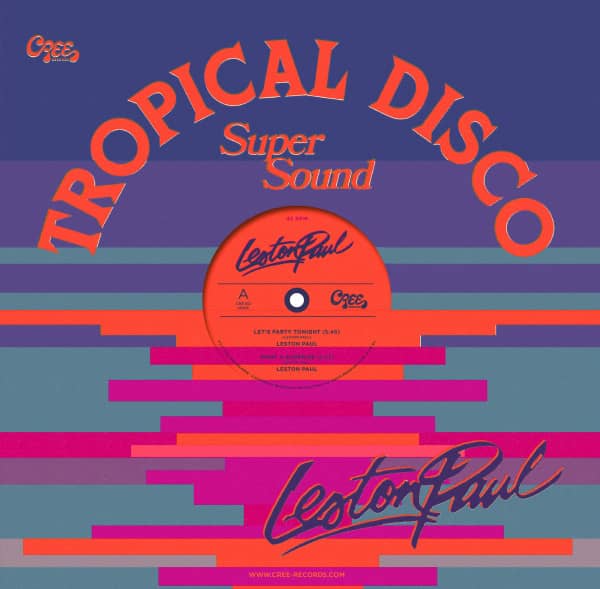 •Leston Paul became the pioneer in electronic music production in the early 1980s in Trinidad.
•Extremely rare and hard-to-find recordings.
•We have selected the best tracks for this limited 12''EP collection.
•This release was made possible through Leston's personal support.
•Horn section on All Nite Tonight by Kool & The Gang.
•Early electro Boogie/Disco, recorded between 1983 and 1987.
Being totally infected in the mid Seventies by the new possibilities analog synthesizers were offering in sound and studio production, Leston Paul became the pioneer in electronic music production in the early Eighties in Trinidad. Leston Paul is one of the most in-demand music producers and arrangers in the Carribeans. It is said that he has worked as a producer on more than twenty thousand recordings.
In 1983 Leston Paul felt the time was right to record his debut album, 'The Arrival' which was done at K.H. Studios in Port of Spain. His obsession with synthesizers led to a heavy use of electronic instruments like an Oberheim synth, a Roland bass machine, a Roland drum machine and a Simmons Digital Clap Machine on this record. Most of the instruments were played by Leston himself. On vocals he used well known singers like Charmaine Forde, Nadie La Fond, Carl & Carol Jacobs, Joanne Wilson and Peter Britto.
Due to lack of proper distribution sales weren't very good. This circumstance makes this record very rare today and sought after.
Leston was introduced to Kool & The Gang's background vocalist Barbara Hernandez by his friend Jeff Medina. Leston had started to write and record All Nite Tonight in Trinidad and brought the song to New York. At the Millford Plaza Hotel Hernandez and Paul finalized the song and decided to re-record the track at the Sound Lab Studio. Kool & The Gang were playing a gig the same day of the recording session in New York and Leston managed to get them into the sudio to record the horn section.
Barabara Hernandez took Leston to Kool & The Gang's home studio in New Jersey and was very impressed by the sound quality they were able to produce and decided to adopt this model in Trinidad. While working on the recording of Arrow's 'Hot Hot Hot' album in New York in 1982 he had his first encounter with an Apple Macintosh computer being used in a studio and was deeply impressed. From the money he made from the production of Arrow's album he bought a Tascam eight-track recorder and an Apple Macintosh computer.
In the bedroom of his apartment in St. Augustine he set up the first home recording studio in Trinidad. Here he produced his next album 'Keys To The City' in 1987, which was completely done on a computer and showcases the potential of electronic music production. The track Everyday Life is very popular among djs and electronic music enthusiasts.

Learn more about Leston Paul
Leston Paul A self-build guitar his grandfather had given to him in his childhood was the... more
Close menu
"Leston Paul"

A self-build guitar his grandfather had given to him in his childhood was the introduction to music. He started taking piano lessons at the age of 15 and realized, ''This is my calling to planet earth''.

In the mid Seventies he was invited to play the organ with the Ambassadors, a brass band from Trinidad. To be able to play with the band he had to learn to read musical scores and made a lot of experiences, also in arranging and harmonization.

This led to a job with a local publishing company. At Cucumber Pulishing, owned by Ben Romany he did the notation of the music scores for lots of different artists. This was also where he met the (Mighty) Duke, a veteran Calypsonian in 1980. Duke gave him the the opportunity to arrange his album. ''He made the craziest decision of his life to allow me to arrange his album 'Harps Of Gold'''. The album was recorded at Sharc Studios which were placed in an old tracking station of the U.S. Army in Chaguramas on the north coast of Trinidad and run by film producer Hugh Robertson. Leston worked at Sharc Studios for the next years and arranged and produced records for the Hammilton Brothers, Funny, Ken Haywood and others.