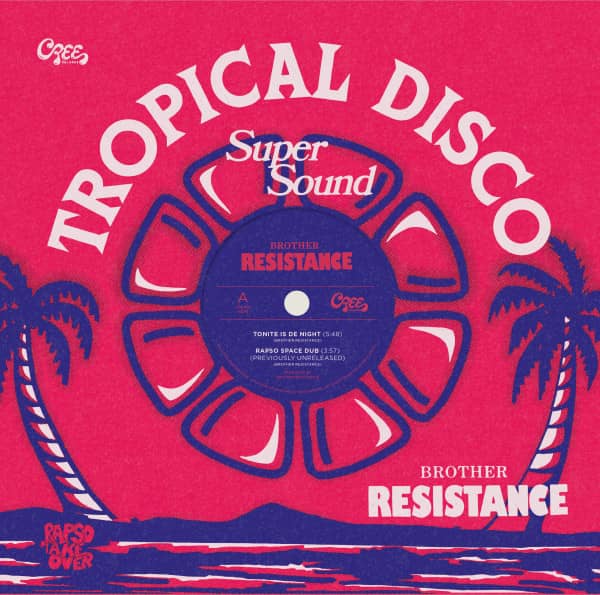 12'' EP with Disco sleeve. 4 tracks, total playing time approx. 20 mns.
• Tropical Disco Super Sound Series, limited to 1,000 copies
• Four 1986 in demand dancefloor bangers from Trinidad & Tobago’s father of Rapso.
• Some of Lutalo ‘Brother Resistance’ Masimba most popular and rare Rapso tracks.
• Rapso mixes Calypso, Disco, Funk and Poetry combined with drumming, emerging from 1970s Black Power revolution.
• Including an unreleased take of Rapso Space Wars!
• Exclusive first time re-release in cooperation with Brother Resistance
• Superb re-mastering by Tom Meyer at Master & Servant. High-quality pressing.
Out of the social unrest and revolutionary times of the early 1970s a new musical art form emerged on the streets of Port of Spain, Trinidad & Tobago. A group of young guys started to combine poetry with drumming and created the musical art form that is known today as Rapso.
Poets known as much for their fiery verses as they were for leading protests were at the vanguard of the 1970s Black Power revolution. There was a new consciousness building in the Trinidad and Tobago arts scene. The two most influential characters were Cheryl Byron and Lancelot Layne.
Lutalo ‘Brother Resistance’ Masimba and others would play basketball during the day and come back out at night, ‘liming’ and playing drums. Other people from the block would join with instruments and Brother Resistance would perform his poetry on the rhythms. The prestigious boys school that Resistance attended refused to acknowledge his attempts at creating verses that reflected the rhythm of the Trinidad and Tobago creole. ''They said it wasn't poetry. They didn't want to put it in the school magazine.''
Resistance and his friends toyed with other words to describe their style. They came up with 'rapsody' but one night during a show in Santa Cruz somebody in the audience shouted out ''How you could rap so!'' And the rest is history.
They recorded their first album ‘Bustin Out’ in 1980. More albums followed and they started to work as producers. In 1986 the band performed at ‘Caribbean Focus’ festival in London and toured the U.K. which helped to lift their reputation internationally. The same year Brother Resistance decided to produce his first solo album and went to England to record ‘Rapso Take Over’. This album contains the highly acclaimed tracks Ring De Bell, Dancing Shoes Rapso and Star Wars Rapso. An unreleased take of Wars In Rapso is featured on this Cree Records 12''.
The band wasn’t too impressed with the ‘English’ production and they decided to record a new version of the song. Junior Wharwood recorded the guitar tracks. Resistance came up with the idea of Tonight Is De Night. The more or less improvised song became a big carnival hit in Trinidad and he went to perform it live with bands like Sound Revolution, Shandileer and Charlie’s Roots.
At the time, these tracks received little airplay in Trinidad and Tobago, but they're undeniable hits that continue to be in demand dancefloor bangers. For this 12'' we have selected four of Brother Resistance's most in demand tracks. Long live Kaiso – Rapso take over!